Egyptian authors are fighting for freedom of expression as the state cracks down on what it calls offending public decency and contempt of religion. 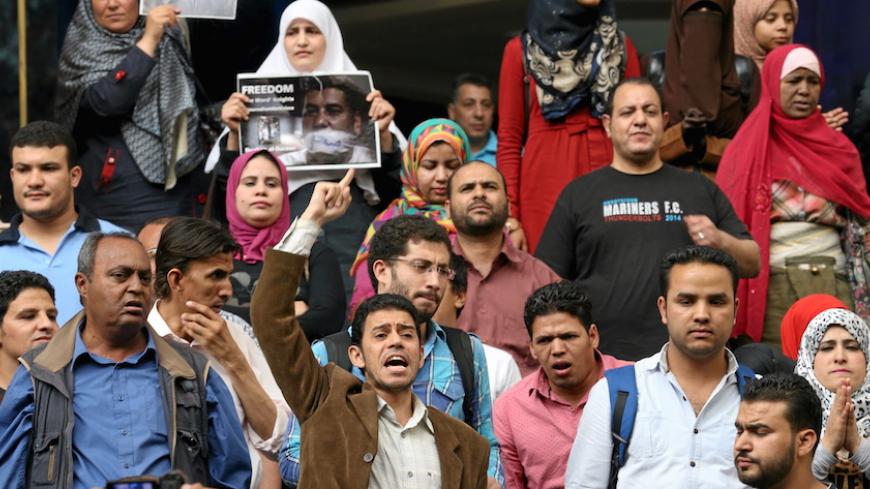 Journalists and activists protest against the restriction of press freedom and to demand the release of detained journalists, in front of the Press Syndicate in Cairo, April 26, 2016. - REUTERS/Mohamed Abd El Ghany

Some in Egypt believe the state, which claims to fight terrorism, rather is creating it through its obsession with security and its quest to preserve a regressive structure in society. The government has tightened the noose on society, taking a variety of measures against innovative minds such as isolating people, silencing them, limiting their imaginations, confiscating their dreams and basically draining the life out of them.

In Egypt, as in some other Arab countries, the state fears every free voice that calls for fighting tyranny.

“Why do dictatorships fear imagination?” asked a number of prominent Tunisian intellectuals in a statement issued March 9 in the wake of verdicts against novelists and authors in Egypt. Signed by 58 intellectuals, the document expressed support for Ahmed Naji, an Egyptian novelist handed a two-year prison sentence in February on charges of offending public decency after he published several pages from his explicit novel “The Use of Life” (also called "Using Life) in Akhbar al-Adab weekly magazine.

Several political parties and rights organizations condemned Naji's incarceration. Then, less than a month later, journalist Fatima Naoot was accused of contempt of religion after she expressed on Facebook her objection to the slaughter of sheep on Eid al-Adha (Feast of the Sacrifice).

Rights activist Negad el-Borai criticized Naoot’s three-year prison sentence and tweeted March 31, “The [Muslim] Brotherhood and politicians are no longer the only ones who have to flee from the ‘prison for all’ policy.”

Meanwhile, Hafez Abu Saada, a member of the National Council for Human Rights, demanded on Twitter the annulment of Article 98 of the Penal Code and said that it leads to the imprisonment of intellectuals, authors and poets and fills Egypt’s human rights’ record with more violations.

Gamal Eid, head of the Arabic Network for Human Rights Information, tweeted April 1 that talk about enlightenment or progressive culture under military or religious rule is a waste of energy.

Young novelist Osama el-Shazly, author of "August," expressed his distress over these verdicts and said he considers the accusations against novelists unfounded.

He told Al-Monitor that the state is generally prone to legally pursuing authors in Egypt, as it honors the notion of a paternalistic, Big Brother state. In a call with Al-Monitor, Shazly added that the religious contempt law in Egypt only punishes those who offend Muslims — as radical imams openly use language offensive to Christians but aren't accused of religious contempt.

Shazly also wondered how “public decency” is determined, let alone offended. He said what is characterized as offensive often is actually just dark humor. He rejected the notion of a Big Brother state dictating virtue, saying, “We will not write our novels on prayer mats!”

In February, Shazly posted on his Facebook page that he would quit publishing literary works in Egypt, in coordination with Naji. When asked whether he had any intention of taking back his decision, he said he is in the process of completing a new novel, but has not made up his mind about publishing it in Egypt. He added that he is observing the public situation and that might change his mind.

Novelist and journalist Ahmed al-Fakhrany told Al-Monitor that some laws are not fit for the 21st century. Fakhrany noted that the laws regarding contempt of religion are imprecise, making their interpretation subject to judges' moods. He illustrated his point with Naji’s case, as one court had pronounced him innocent, while another sentenced him to jail. Such verdicts are intimidating and threaten public expression, Fakhrany said. He added that laws should be structured so that decisions are reached objectively.

Egyptian novelist Mohamad Rabie, who wrote the novel "Mercury," agreed. He told Al-Monitor that these verdicts stem from generally conservative public prosecutors and the judiciary, and this atmosphere enjoys a public support. He said that if the objective behind these trials is to push Egyptian authors to practice censorship, they will not succeed. In fact, Rabie said he considers such decisions challenges, making him even more insistent on proving his point of view.

He said that, unfortunately, Egypt's cultural minister is not dedicated to culture, but rather the state. Rabie described Minister of Culture Helmy Namnam's stance on free expression as inconsistent. Rabie downplayed the importance of Namnam taking a stance of solidarity with intellectuals at a conference involving the Syndicate of Journalists' Freedoms Committee in the wake of intellectual freedom cases. He said such displays of solidarity do nothing tangible to solve the crisis.

Ibrahim Abdel Maguid, author of "No One Sleeps in Alexandria," "The Other Place" and "Birds of Amber," among other novels, told Al-Monitor the contempt of religion law conflicts with the 2014 Egyptian Constitution. He said he has seen such convictions against authors backfire. For example, after Naji was sentenced to jail, his novel received wide attention from more than 1 million readers. Before that, he had only sold 50 copies.

Abdel Maguid expressed his conviction that such an atmosphere will not affect literary or creative production, because writing is based on artistic sincerity.