A Coptic Christian calligrapher in Upper Egypt is putting his artistic talent to use for all faiths. 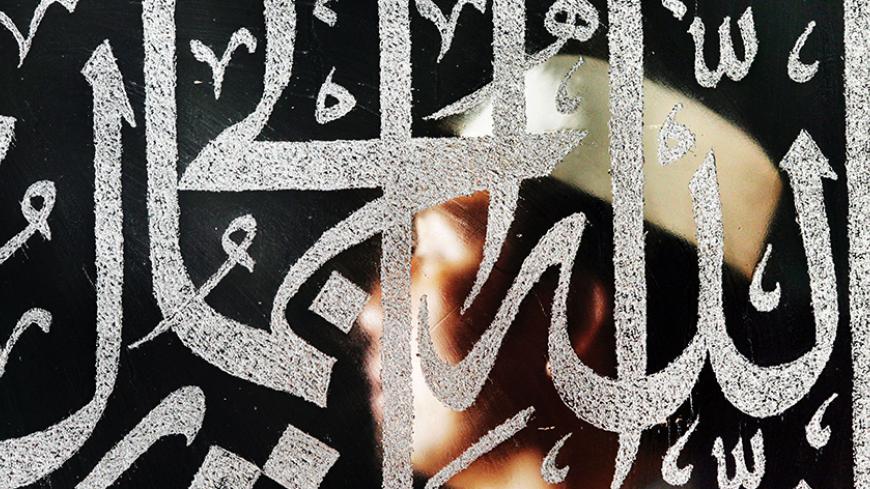 A man recites a prayer next to Islamic calligraphy that says "Allah" at a mosque in Kota Bharu, northeast of Kuala Lumpur, Nov. 1, 2005. - REUTERS/Bazuki Muhammad

Fayez Youssef believes that one’s own happiness emanates from the happiness of others.

Youssef is a Coptic Christian calligrapher well-known in Minya’s Bassam neighborhood for adorning mosques with the 99 names of Allah and Quranic verses. He developed his talent to strengthen his relationship with his Muslim neighbors and has worked hard to put smiles on their faces in this city 150 miles (245 kilometers) south of Cairo.

He could not care less about the opinion of radical Copts who oppose his work, or those embracing a different ideology. He recounted one of the difficult situations he has faced, when a woman objected to his inscribing verses on mosques, or even holding a copy of the Quran in his hand.

She screamed in his face, “This is the book of Allah. It should only be held by a pure person.” Fayez said he was shocked. For a moment, he thought that it would be the last Quranic verse he would ever inscribe in his life.

Yet his Muslim colleagues condemned the confrontation and insisted that he carry on. They assured him that religions unite people, rather than divide them, and that he should not be concerned about extremist opinions as long as he is making others happy. He assented because he is well aware that happiness comes from accepting others.

Youssef told Al-Monitor that when he saw the eyes of his Muslim neighbors and friends widen with admiration of his work, he stopped charging for it and contented himself with the feelings of happiness and people’s love.

He had begun seriously practicing calligraphy when he joined the Egyptian armed forces, where he was chosen to be a member of a military division specializing in lettering and drafting the leaders’ documents and panels. Youssef took advantage of his enlistment to learn the different forms of Arabic calligraphy and look at all the books and references to develop his skills.

After his military service ended, he decided to practice calligraphy as a career, but hardship presented obstacles. He did not have an office, so he bought a small desk that he set up on al-Husseini street in Minya. He worked with the minimum amount of materials needed. Youssef endured all the difficulties for the sake of his passion and became widely known among university students and residents who sensed his talent, creativity, honesty and love for others.

Youssef recounted the first time he decorated a mosque.

“A Muslim friend of mine asked me to adorn a mosque, which was new at the time, and to inscribe the 99 names of Allah on the walls. I was concerned that some Muslims might react angrily to this, yet my friend insisted, particularly since I had previously gifted him with panels I had inscribed with Quranic verses,” Youssef said.

“So, I started with the adornment of Seif Nasr mosque. I made sure to observe all of the customs that Muslims adhere to in the mosque, such as taking off shoes when entering and avoiding being loud. I was convinced that respect must be shown at the mosque, because it is a house of God. I was the focus of the worshippers’ attention and admiration as I was inscribing,” he said.

When he finished, Youssef did not bring up the subject of a fee.

“But those managing the mosque insisted on paying me. I agreed, but I did not care about the amount, since the actual reward was the feeling of joy at my first experience in adorning a mosque,” he said.

Following that experience, Youssef carried on with his work, and has so far adorned 15 mosques. He has made it clear to everyone that he does not charge at mosques that are built through personal efforts and the people’s contributions. As for mosques that are built at the state’s expense, he accepts any sum, not caring how much.

Recently, Youssef declined payment for adorning the Mosque of the Martyrs. He wanted to share with his Muslim neighbors the joy of reconstructing this mosque, which had been recently torn down.

Youssef believes that reading the Quran and learning its verses are the best ways for calligraphers to develop their talent. For this reason he has a copy of the Quran and has learned verses by heart to understand what he is inscribing.

Youssef is proud of learning the Quran and has a knowledge of classical Arabic grammar that exceeds that of most Muslims. When Al-Monitor met with him, he told many stories about his childhood, when he used to write Quranic verses in calligraphy on the chalkboard at school. On every Muslim occasion or holiday, he would hang banners inscribed with Quranic verses related to this occasion in front of his house.

Youssef also helps Coptic pastors inscribe banners to be hung in front of the mosques during the holy month of Ramadan and Islamic holidays. Churches often present these banners to mosques as a show of interfaith harmony. He donates his fee, regardless of the church’s denomination. Youssef is not concerned about the money or the religion. The only thing he cares about is the people’s eyes, widened with joy, at seeing him inscribe verses they believe in, even if they come from a different religious tradition than his own.