Some worry Turkey’s losses from an angry Russia could reach $20 billion, but others expect the figure to be much lower and point out that Russia’s losses will be no less painful. 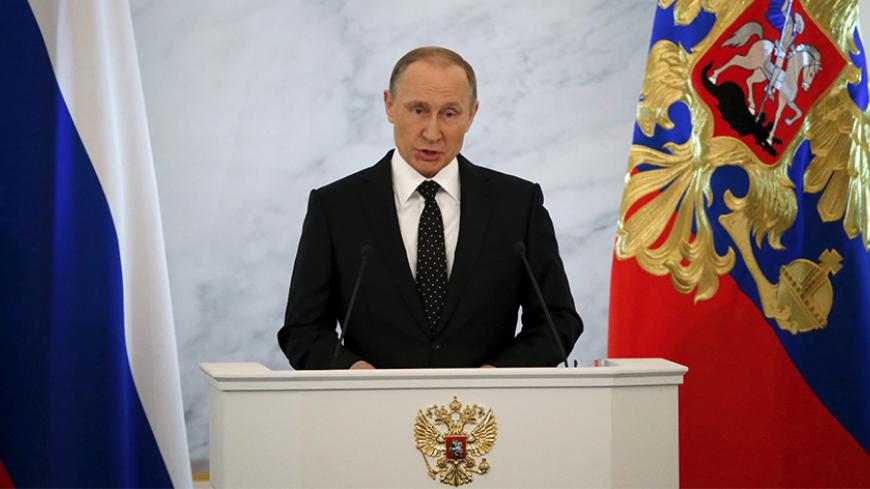 Russian President Vladimir Putin addresses the Federal Assembly at the Kremlin in Moscow, Russia, Dec. 3, 2015. Turkey will regret "more than once" its shooting down of a Russian bomber jet near the Syrian-Turkish border, Putin said, adding that Moscow would not ignore Ankara's "aiding of terrorists." - REUTERS/Sergei Karpukhin

Turkey’s downing of a Russian jet in November tanked the phenomenally growing economic relations between the two countries.

Russia’s reactions have not been confined to economic sanctions. Almost immediately, Turkish businessmen visiting Russia were detained, restrictions were imposed on Turkish workers and visa-free visits to Russia will end Jan. 1. Russia officially called on its citizens not to go to Turkey, canceled charter flights, excluded Turkish companies from tenders and terminated military cooperation between the two countries.

Apparently these serious measures were not enough to soothe the Russian administration’s anger.

"Those who committed this treachery will get the punishment they deserve," Russian air force Cmdr. Viktor Bondarev said at the funeral of the Russian pilot killed over Turkey.

A few days later Putin declared, "We will not forget the shooting down of our plane. Turkey will regret what it did.” Although many felt that a military threat lurked behind his words, Putin stressed that Russia is not considering military options against Turkey.

Besides military options, Russia’s strongest card against Turkey is natural gas. Russia had started the Turkish Stream pipeline project to deliver natural gas to Europe via Ukraine. The project was designed to move more than 60 billion cubic meters of gas annually via four pipes to meet the gas demands of Europe and Turkey. It was to make Turkey a major player in the energy market.

Negotiations over the project have halted, though there has been no official declaration yet that it is scrapped. Nevertheless, Turkey, which consumes 50 billion cubic meters of gas annually, is preparing to deal with the demise of the project. It also recognizes the possibility that Russia could interrupt its annual delivery of 26 billion cubic meters of gas to Turkey with excuses of maintenance and breakdowns. Turkey’s natural gas storage capacity is the lowest in Europe, and it needs a regular influx of gas.

It is of vital importance for Turkey to find alternative sources for its natural gas needs.

On Dec. 3, Turkish Prime Minister Ahmet Davutoglu went to Azerbaijan to discuss expediting construction of the Trans-Anatolian Natural Gas Pipeline (TANAP), which is to supply 16 billion cubic meters of gas to Turkey and Europe annually starting in 2018.

Speaking on Haberturk TV, Davutoglu assessed the possibility of reductions in natural gas imports, saying, “I don’t think Russia will take such an action. We have mutual rights and obligations based on international legality. This is not about buying personal attire."

"But we have to be prepared for the worst possibility. That is why I have instructed the Energy Ministry to work on alternatives,” he said, adding that the ministry will study the possibility of increasing the amount of natural gas and LNG bought from Iran and Azerbaijan, among other options.

Asked about Russia’s embargo on Turkish fruits and vegetables, Davutoglu said, “Turkey has no problem finding markets in the world. We can sell them elsewhere. Our first decision will be to recover the fruits and vegetables stuck in Russian customs to prevent their perishing.”

Can Turkey make use of the natural gas reserves discovered by Egypt and Israel? Former BOTAS CEO Gokhan Yardim told Al-Monitor, “We don’t have good relations with Egypt. [Crossing] Turkey is the most economical way of carrying Israeli gas to Europe. They were discussing it with four or five of our private companies, but they stopped. Israel has now overcome its legal problems with a law signed by [Prime Minister Benjamin] Netanyahu. I think the process can move forward.

"The improvement of relations between the two countries is important also for progress on this project. Although the Russian leadership appears to have lost its senses, I don’t think it will go as far as annulling natural gas accords. If that happens, already-negative views about Russian gas in Europe will get worse," he added.

Yardim said the option that could be implemented most quickly is northern Iraq's natural gas. “We are told that the gas flow can start in 2016 or 2017 at the latest. In 2020, this pipeline will be carrying 20 billion cubic meters of gas, half of which would be sent on to Europe,” he said.

Cetin Osman Budak, an opposition Republican People's Party deputy from Antalya, researched the costs to Turkey of shooting down the Russian jet. He explained what might happen if relations are totally severed:

“Our exports to Russia total $6 billion. We make about $6 billion from 4.5 million Russian tourists. In 2014, they spent about $8.5 billion for personal apparel purchases, which they then sell in Russia. Our contractors are doing $2.3 billion worth of work in Russia. When you add all these, our loss will be far above $20 billion. Antalya was doing most of the fresh fruit and vegetable exports to Russia. Exports have stopped. The produce is either on trees or in storage. Hotels have cut their prices by half. There will be unemployment in tourism, agriculture and textiles. This is a disaster situation.”

But the deputy prime minister in charge of the economy, Mehmet Simsek, is not so pessimistic. Simsek said even in the worst-case scenario, Turkey’s loss would peak at $9 billion.

Looking at the trade volume between the two countries, Turkey exported $6 billion in goods last year, while Russia sold to Turkey a total of $25.3 billion worth of goods, including $16 billion worth of natural gas.

Turkey is now monitoring Russia's moves. If relations don’t improve through diplomacy, Turkey can initiate countermoves. Erdogan's assertion that it was Turkey that suspended the Turkish Stream project could predict moves to follow.

True, Russia buys $6 billion in goods from Turkey, but it also sells to Turkey $9 billion of goods, apart from natural gas.

If Turkey extends its search for alternative sources to the commodities it used to buy from Russia, the already-troubled Russian economy could suffer at least as much as the Turkish.

But the crisis has a silver lining: It has shown Turkey the gross strategic mistake of becoming so dependent on Russia.