Hopes that Western sanctions against Moscow would benefit Turkey appear to have been premature. 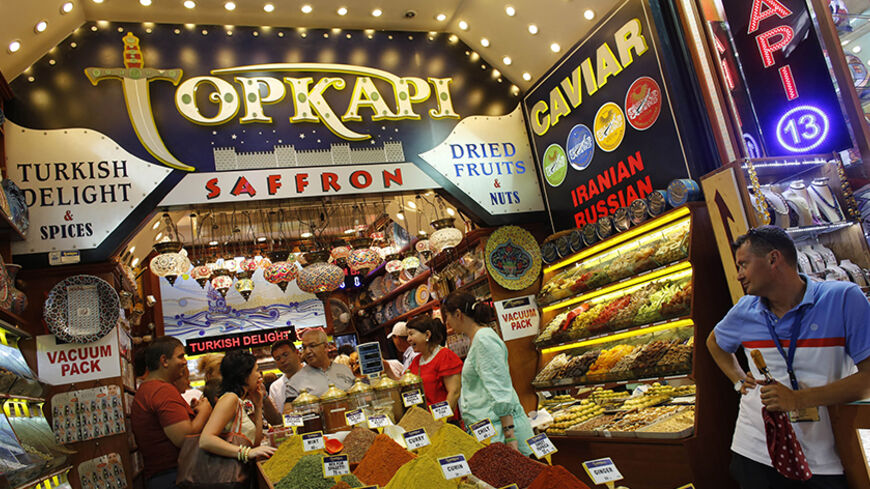 Tourists from Kazakhstan and Russia shop at a store at the Spice market, also known as the Egyptian Bazaar, in Istanbul, Aug. 23, 2013. - REUTERS/Murad Sezer

The friendship between Recep Tayyip Erdogan and Vladimir Putin clearly bolsters the positive atmosphere between the two countries. It is, however, no secret that mutual economic interests provide the driving force for Turkish-Russian ties today.

The present volume of these interests, and official plans to further boost it, ensures that political differences Ankara and Moscow have on various issues, most notably over Syria, do not cast a shadow over ties.

Dark clouds have nevertheless started gathering over economic relations because of Russia’s economic woes. Despite the optimistic official outlook for these relations, the effects of Western sanctions on Russia — and the sharp decline in oil prices, which has amplified Russia’s troubles — are also worrying the Turkish business community.

The downturn in Russia comes at a time when the two countries pledged, during Putin's Dec. 1 visit to Turkey, to increase the volume of bilateral trade to $100 billion by 2020.

Putin also pulled a bonus from his hat for Turkey when he said Moscow was scrapping the South Stream pipeline project, which was to carry Russian gas to Europe over Bulgaria, and would build an alternative pipeline to Turkey.

For good measure, Putin also threw in a 6% discount in the price of gas sold to Turkey, leaving Ankara with smiles all around. Al-Monitor’s Zulfikar Dogan and Maxim A. Suchkov have evaluated the merits and demerits of Moscow’s decision, which was laced with a sense of retaliation against Europe and the United States.

Western sanctions on Russia had also whetted the appetite of Turkish exporters after Ankara — to the annoyance of its NATO allies — made it clear it would not support the sanctions, despite its disapproval of Moscow’s actions in Ukraine and Crimea. With Europe pressing hard on Russia, the assumption was that Moscow would turn increasingly to Turkey.

The shopkeepers of Istanbul’s Laleli, Osmanbey and Merter districts joined those with raised hopes, expecting an increase in the traditional and semi-official “suitcase trade” in textiles, leatherwear and cosmetics with small Russian buyers who come to Turkey for this purpose. Meanwhile, Turkish industrialists hoped to reap the advantages of the drop in the price of Russian oil.

To cite a Turkish saying, though, calculations at home rarely match the marketplace.

Let alone an increase in Turkish exports, analysts are predicting now that it might be difficult to maintain the current annual level of some $7 billion because of Russia’s increasing financial difficulties.

Statistics already show a decline in the January-November period of this year, relative to same period in 2013, with the volume of Turkish exports falling from $6.5 billion to about $5.6 billion.

Prospects for the lucrative tourism sector also appear glum, as the number of Russians visiting Turkey is expected to fall. The sharp decline of the ruble against the dollar, as well economic uncertainties at home, have reportedly resulted in an estimated 40% drop in advance holiday bookings by Russians, according to industry experts.

Russian tourists, who generally prefer Antalya on Turkey’s Mediterranean coast and resort towns close to it, leave an estimated $4 billion to $5 billion annually. Some 4.3 million Russians visited Turkey in 2013. While this figure is expected to be exceeded in 2014, once final figures are in, uncertainty remains for 2015.

Guntay Simsek, economic analyst for the daily Haberturk, is among those saying that Turkish hopes of benefiting from Western sanctions on Russia were premature.

“Today [we] talk about the economic crisis in Russia but only a month ago we were in a different mind-set. Russia was going to turn to Turkey because of Western sanctions … helping us diversify our exports and increase profits” Simsek wrote in his Dec. 25 column. “Those who thought sanctions would benefit Turkey were premature in their thinking.”

Enver Erkan, an expert with the ALB Menkul brokerage firm, also strikes a less than optimistic note. He points out that Russia is Turkey’s No. 1 import market (mostly buying oil and gas) and fourth export market. Erkan says that while the drop in the price of Russian oil is a positive development for Turkey, the deepening economic crises in Russia, because of the fall in oil prices, is not.

Erkan also points to the risk of the crisis in Russia spreading to the countries in the Caucasus and the Commonwealth of Independent States (CIS). “During the first 10 months of this year, Turkey’s exports to Russia and the CIS reached $14.2 billion. A crisis in this geography will cost Turkey at least $5 billion. Together with the loss in tourism the total loss from Russia in 2015 could reach $6 billion,” he said.

Such negative predictions anger some with vested interests in economic ties with Russia. These predictions have also revived speculation in the pro-government media about “anti-Turkish lobbies.”

In a statement to the daily Star, Basaran Ulusoy, the head of The Association of Turkish Travel Agencies (TURSAB), even invoked the “wrath of Allah” on those who claim that the number of Russian tourists would decline in 2015. He also accused them of “betraying Turkey.”

“Russians travel when they feel bad and when they feel good. In other words, they travel no matter what. Turkey is the country they prefer the most. There is no need to exaggerate what is happening in Russia today, otherwise there will be some who believe this is being done intentionally,” Ulusoy said, claiming a record number of Russians would visit Turkey in 2015.

Ulusoy’s exaggerated optimism is belied by a member of his own association. Suat Cavusoglu, the TURSAB representative for the Alanya region, which is adjacent to Antalya, told daily Milliyet that the fall in the ruble’s value would have drastic results in 2015 for the tourism sector, and lead to the bankruptcy of some operators.

Talking to Milliyet, Cetin Osman Budak, the head of the Antalya Chamber of Trade and Industry (ATSO), said there was already a 35% fall in the number of Russian tourist in Antalya for October and November.

He added that agriculture, which is vitally important for the Antalya region, was also suffering from the crisis in Russia. “Russia is the main market for our fruit and vegetables. Because of the drop in buying power and the devaluation there our agricultural exports have also affected,” Budak said.

Economic Minister Nihat Zeybekci is trying hard to disperse the dark clouds gathering over Turkish-Russian economic ties. He told parliament on Dec. 15, while presenting his ministry’s budget, that of the total $32 billion trade with Russia the value of Turkey’s export was only $6 billion, the rest representing imported Russian energy.

“There is an ongoing process with Russia currently in which technical delegations and ministers will try to overcome problems and restrictions concerning quotas, certificates and limits the end of 2014, or by the first months of 2015. The aim is to move, within two or three years at the latest, toward our target of $100 billion in trade,” Zeybekci said.

Andrei Karlov, Russia’s ambassador to Turkey, also weighed in, telling Hurriyet that Turkish contractors doing business in Russia may suffer some consequences because of the situation in his country. Karlov nevertheless maintained that the present crisis would be over one or two years.

Warning Turkish contractors not to leave Russia now because their places would be filled by Chinese companies, Karlov said that if Turkish operators were concerned about the fall in Russian tourists, the solution was in their hands.

“Prices of tours increase in excess of annual inflation and can be lowered,” Karlov said.