With no end to bilateral tensions in sight, Turkey is making plans to significantly cut down Russia’s majority share of its natural gas supply. 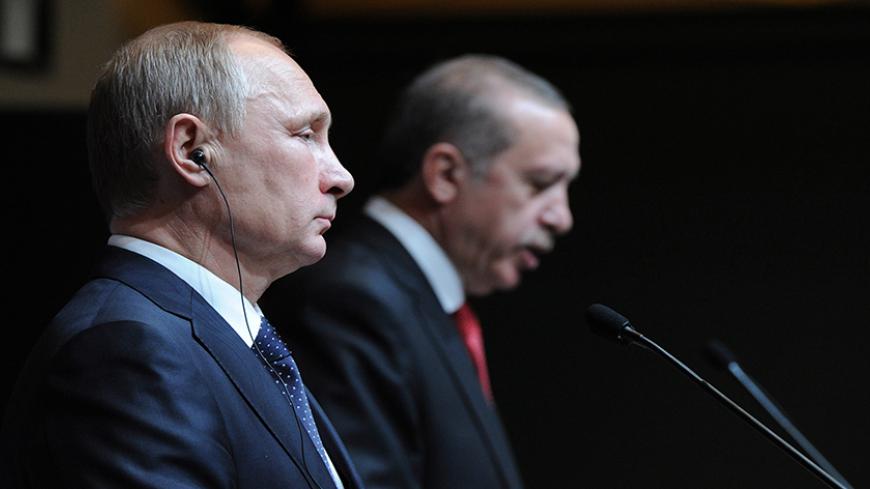 Scrambling to reduce its gas dependence on Russia, Turkey has moved to speed up the construction of the Trans-Anatolian Natural Gas Pipeline (TANAP), designed to carry Azeri gas to Europe via Turkey, and set up three new liquefied natural gas facilities.

The crisis with Russia, sparked by Turkey’s downing of a Russian jet at the Syrian border in November, has prompted Turkey to seek new supply strategies that would reduce reliance on Russian gas in the shortest possible time. Accordingly, diversifying supplies has emerged as a priority to change the balance.

The plane crisis aside, Russia’s tensions with Ukraine are also of close concern to Turkey. In comments to Al-Monitor, Gokhan Yardim, the former head of Turkey’s state-run pipeline company BOTAS, noted that the gas transit agreement between Russia and Ukraine was due to expire in 2019. Turkey imports up to 14 billion cubic meters of gas per year via this route, he said, stressing that alternative sources should become operational before 2019 to make sure Turkey has a replacement.

So, what alternatives are there for Turkey?

TANAP is the first project that comes to mind. Currently under construction, the pipeline is scheduled to become operational in 2018 and carry gas from Azerbaijan’s Shah Deniz-2 field to Europe via Turkey. Out of the 16 billion cubic meters of gas the conduit will initially carry, Turkey will get 6 billion cubic meters, while the rest will flow on to Europe. After the crisis with Russia, however, Turkey has launched efforts to accelerate construction, holding high-level talks with Azerbaijan.

In March, President Recep Tayyip Erdogan hosted his Azeri counterpart Ilham Aliyev in Ankara, and said the two sides were making efforts to finish TANAP ahead of schedule. The meeting followed Prime Minister Ahmet Davutoglu’s trip to Baku on Dec. 3, days after the downing of the Russian plane, during which he also spoke of efforts to complete the conduit before 2018.

The plan aims to get the pipeline running in late 2017, with the prospect of Turkey increasing its initial share to 10 billion cubic meters if needed. The more Turkey imports from TANAP, the less it will buy from Russia. The Russian gas currently flows from two conduits to Turkey: the Ukrainian route and the Blue Stream pipeline, which runs under the Black Sea. Even if the flow via Ukraine stops, 10 billion cubic meters from TANAP will mean a problem-free replacement for Turkey.

Yardim, however, believes the acceleration plan is too ambitious. “Getting gas from TANAP in 2017 will be a surprise. Even if the flow starts, it will be limited to a few billion cubic meters,” he told Al-Monitor. Pointing to technical obstacles, he explained, “The compressor tender was only recently completed. The manufacturing process is likely to take 18 months, meaning late 2017. And the job is not over with the completion of the pipeline. They need to drill wells and build platforms at Shah Deniz II. Drilling a single well will not be enough. All this could be ready for 2018, but I’m doubtful about 2017.”

Still, Yardim believes Russian dominance over Turkey’s gas imports is bound to diminish in the next few years. “Turkey’s projects and plans are being shaped toward this end,” he said.

Israeli gas is another alternative. Turkey and Israel have recently revived talks to normalize ties, with the prospect of gas trade seen as a key incentive for reconciliation. Israel’s gas-exploitation project, however, is bound for a delay following a critical ruling by the country’s Supreme Court last month. Citing legal flaws, the court gave the government a year to amend the plan for the development of offshore reserves or see the plan canceled. The project involves a deal that Prime Minister Benjamin Netanyahu reached with Texas-based Noble Energy and Israel's Delek Group last year, giving them control of the country's largest gas field, Leviathan.

Turkey, meanwhile, is drawing up new projects that have yet to be officially announced. Speaking on condition of anonymity, a source who took part in meetings on the issue told Al-Monitor that Ankara plans to set up three floating terminals off Eregli in the Marmara Sea, Aliaga in the Aegean Sea and a yet undetermined location off the country’s southern coast to receive LNG imports by sea. The terminals would consist of anchored ships serving as storage facilities for incoming LNG supplies. Work is currently underway for a tender for the floating facilities, a model that countries like Brazil and Chile are already using, the source said. The capacity of each terminal is not yet known, but the project is planned to have a total capacity of more than 10 billion cubic meters and become operational in two years. Additionally, the government plans to open tenders to expand the capacity of an existing LNG facility at Eregli, the source said.

All projects are aimed at reducing reliance on Russian gas, but Russia is bound to remain Turkey’s largest supplier with the 16 billion cubic meters of gas flowing through the Blue Stream. Yet if everything goes as planned, its share will shrink from 55% to 30-35%.