Turkey paid the French company $1.45 billion to increase its share in gas from Azerbaijan’s Shah Deniz-2 gas field from 9% to 19%. 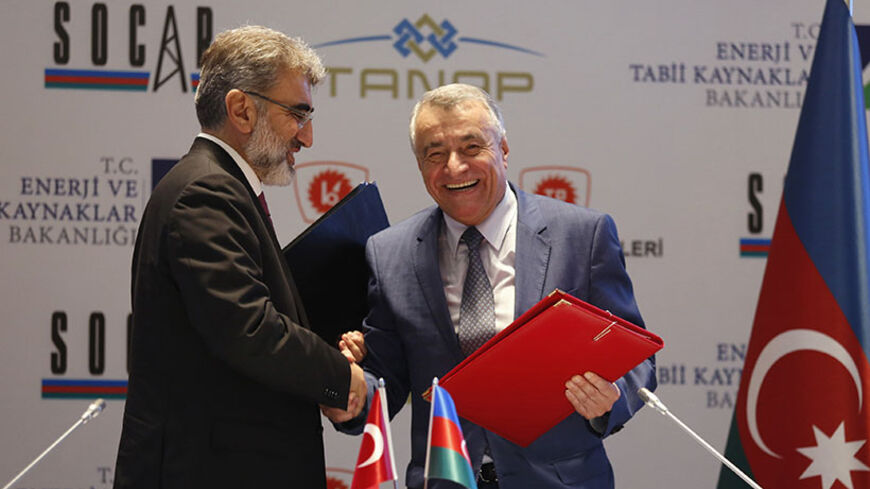 Turkey wants to free itself from foreign dependence on energy following the realization that the cost of energy was the main cause of the $65.1 billion deficit in 2013.

According to information given to Al-Monitor by sources in the Energy Market Regulatory Board, the initial idea was to have Turkey’s Pipeline Oil Transport Corp. (BOTAS) to buy 10% of the Azeri shares, thus bringing Turkey’s total share to 19% along with the 9% already owned by TPAO. But the plan was modified when it became clear that BOTAS could not explore and produce at the same time and TPAO had ample funds available. It was decided that TPAO’s share will be increased instead. TPAO was successful in locating additional resources and last week bought 10% of shares from French company TOTAL for $1.45 billion.

TPAO financed $450 million of the price from its own sources while securing $1 billion from Turkey’s Is Bank and VakifBank. With the contract signed, TPAO also bought 10% of TOTAL’s share in the South Caucasus Pipeline project, increasing its share there to 19%. Thus, Turkey has become the second majority shareholder of Shah Deniz after BP. Turkey, with BP and other partners, will produce natural gas for the next 50 years from the 468-square-kilometer (181-square-mile) Shah Deniz field to meet its own needs and to sell to Europe. This is said to be the largest international investment by a Turkish company to date.

Construction of the 1,800-kilometer (1,118-mile) Trans-Anatolia Natural Gas Pipeline (TANAP) project will start at the beginning of 2015.

The cost for the part of the pipeline in Turkey is estimated at $7 billion. Sources told Al-Monitor that this can rise to $9 billion to $10 billion. Moreover, because Turkey increased its shares in the Shah Deniz field and South Caucasus Pipeline project, it will have to contribute $2 billion to $3 billion for the construction of the pipeline from Azerbaijan to Turkey. Azerbaijan used to own 80% of TANAP with Turkey owning the remaining 20%. Turkey’s share was later increased to 30%.

The natural gas that will be produced by the Shah Deniz field and constitutes a serious alternative to Russia will reach European consumers in four years. Feasibility reports on 21 Turkish provinces where the pipeline will traverse and on required land acquisitions have been completed. Reports on environmental and social effects have been finalized, too.

The 56-inch pipeline that exits Azerbaijan and reaches Turkey via Georgia will have its European exits at the Greek and Bulgarian borders. Its final terminal will be in Italy. Turkey will meet its own needs from terminals to be built in Eskisehir and western Thrace.

Azerbaijan has natural gas reserves outside the Shah Deniz-2 field with proven reserves of 3 trillion cubic meters (106 trillion cubic feet). This reserve also increases the importance of the TANAP project.

About $45 billion will be invested for the construction of the pipeline.

The project has created much excitement, because it will make Turkey a partner in a major natural gas resource instead of being just a consumer of energy from external sources.

Nevertheless, Europe wants TANAP to become operational quicker as they do not have much trust in Russia, especially during winter. Because of the fear that after Russia responded to European sanctions over Ukraine by boycotting European foodstuffs, it can also opt for retribution with natural gas.

The operation of the natural gas pipeline that reaches Europe via Ukraine is already creating concerns. Europe has embarked upon an urgent search for alternate sources while following TANAP closely, which will be a key project for the natural gas supply — not only for Turkey but also for Europe.

It's already reported that the project could be expedited because of “urgent needs.”