Why did Iranian TV censor interview with Zarif?

After a highly anticipated interview with Iran's foreign minister was canceled, many accused state television of siding with conservatives in the country. 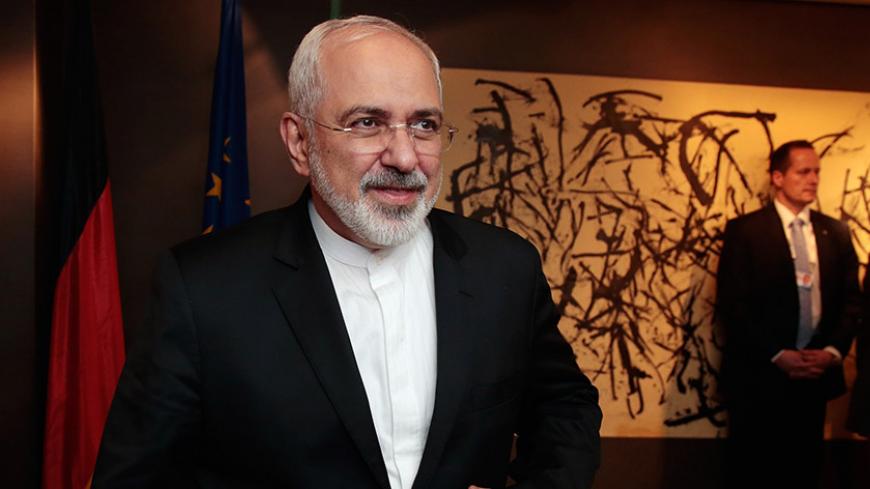 After a highly promoted holiday interview with Iran’s popular Foreign Minister Mohammad Javad Zarif was canceled at the last minute, Iranians cried foul, accusing state television of taking sides in a partisan quarrel ahead of the elections.

The interview was to take place with the popular television host Adel Ferdosipour, who hosts the most watched soccer news program in Iran, called “Navad,” or 90. The interview was scheduled to air on Shab-e Yalda, Winter Solstice, an ancient Iranian holiday that is secular, like Thanksgiving is in America.

Pictures of the prerecorded interview were shared widely online and on messaging services, making it a highly anticipated event. Ferdosipour, who is not a political figure, is known for his informal and personal interview format, his casual tone of conversation — at times he stumbles through sentences and will speak with his hand on his chin or over his mouth. What makes Ferdosipour stand out is that he does not pull any punches and does not shower his guests with compliments and pleasantries as many serious or hard news Iranian television journalists tend to do. Also, as a sports journalist, he has been given more leeway to make subtle criticisms of government policies, which has only increased his popularity.

Even still, very few expected a hard-hitting interview. It was expected that the interview would focus on “sports diplomacy,” perhaps even covering Zarif’s more personal side, his favorite soccer team, or on personal reflections of the nuclear talks rather than on centrifuges, sanctions or an international crisis. Ferdosipour’s interview with Hassan Khomeini, grandson of the founder of the Islamic Republic of Iran, is still very popular online for these reasons.

Days before the interview was to air, hard-line media had taken the opening shot, the first sign that some would attempt to politicize it. In a Dec. 19 article, Vatan-e Emrooz wrote that given the dire situation of the economy, Ferdosipour should interview Minister of Industries and Business Mohammad Reza Nematzadeh instead of Zarif. The article referred to Ferdosipour as “siasi-pour,” which means “political” in Persian, suggesting that the sports journalist has now become a politicized journalist.

Ferdosipour was the first to announce the cancellation by the Islamic Republic of Iran Broadcasting (IRIB), saying, “Officials from IRIB did not see it fit to air the interview tonight.” He added he hopes to air it at the first opportunity.

Many believed that the show was canceled for political reasons. Iranian member of parliament Ali Motahari wrote that he was told Vatan-e Emrooz had written a letter to IRIB protesting that the interview favored one political group over another.

Reformist websites wrote that given the closeness of the interview to the February 2016 elections, conservatives were worried that the interview would be seen as in support of the administration. However, many questioned the validity of these concerns given that conservative Iranian politician Gholam-Ali Haddad-Adel appeared as a guest on the same network the same night.

The public relations department for IRIB issued an unconvincing statement regarding the cancellation, stating that IRIB had never formally requested the interview with Zarif and that it was done by the producers of the show without the knowledge of IRIB. The statement also read that Navad is a sports show, implying that a program with a political figure would not be appropriate.

Zarif seemed to handle the situation gracefully, sending a message to Ferdosipour saying, “I heard they brought on pressure. Do not be worried at all on my behalf, not airing the interviewing is not important for me. Do not get entangled unnecessarily.”

Beyond the pressure brought about by hard-line media, which are often believed to be connected to security agencies in the country, it is unclear what happened behind the scenes at IRIB. Censorship against Reformists and even moderate political groups by state television is not unprecedented. While Iranian television is referred to as “national television,” its political leanings have typically been conservative.