Supreme Leader Ayatollah Ali Khamenei has appointed Abdul Ali Asghari as the new head of Iranian television after the previous head resigned abruptly only 18 months into his five-year term. 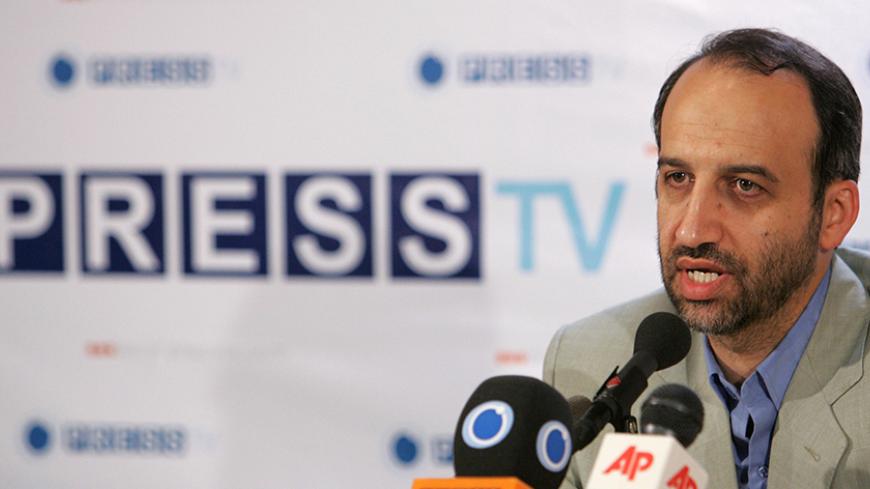 Mohammad Sarafraz, the head of international services of the Islamic Republic of Iran Broadcasting and head of Press TV news channel, speaks during a press conference in Tehran, June 20, 2007. - BEHROUZ MEHRI/AFP/Getty Images
Arash Karami
@@thekarami
May 11, 2016

In a statement May 11, Khamenei thanked Sarafraz for his “revolutionary efforts” and appointed him to the Supreme Council of Cyberspace. Khamenei also asked the new head of IRIB to focus on “attracting, retaining and training a revolutionary and skilled workforce and having an influential presence on social media.”

Asghari, who was previously a deputy at IRIB in charge of technology and a professor at the IRIB college, will become the sixth individual to head this organization, which has a $1 billion annual budget. He has been referred to as “the father of digital television in Iran,” for his work on converting the organization from analog to digital.

Before the 1979 Islamic Revolution, Asghari was a follower of Ayatollah Ruhollah Khomeini, founder of the Islamic Republic of Iran. He was arrested for his political activities by the previous government’s secret police and was in prison until the final days of the revolution. He held important posts within the Islamic Republic after the revolution, including adviser for the Supreme Council for the Cultural Revolution and heading the IRIB college.

When Sarafraz was appointed as head of IRIB in November 2014, Asghari was reportedly on the short list of potential candidates. Asghari immediately clashed with Sarafraz, and according to Iranian media, was either let go or resigned. The head of Iran’s judiciary, Ayatollah Sadegh Larijani, appointed Asghari as an adviser.

Asghari will be taking over an institution that has faced numerous challenges and scandals. According to Jahan-e Sanat newspaper, some of the controversies include the removal and hiring of new managers who clashed with the old guard and the closure of provincial stations that led to a number of layoffs. The previous IRIB head, Ezatollah Zarghami, held the position from 2004 to 2014, leaving an indelible mark on the organization and the makeup of its staff. Some disagreements and fights became so severe, according to Jahan-e Sanat, that the security institutions of the country reportedly became involved.

In March, there were reports of Sarafraz’s 10-day absence from work after a special inspector suddenly left her position and moved to Oman. In February, a Press TV employee released audio of a manager’s sexual harassment leading to the dismissal of two managers.

One of the most controversial decisions under Sarafraz was to not air a holiday special interview featuring Foreign Minister Mohammad Javad Zarif and popular sports journalist Adel Ferdosipour in December 2015. The pre-recorded interview, which was to focus on “sports diplomacy,” had been highly publicized and anticipated. Hard-liners had lobbied to have the interview canceled due to the forthcoming February elections. The last-minute decision to cancel the interview forced Ferdosipour to go live on national television and announce, “Officials from IRIB did not see it fit to air the interview tonight.”

Beyond management issues and scandals, IRIB has also failed to reverse the declining viewership, according to Jahan-e Sanat. “More than ever, the national media has become unreliable among the people,” the report read. “From the production of low-quality programs to mundane series and lately the repeated insults of hosts have been an insult to the intelligence of the audience.” The last point regarding “repeated insults” was a recent incident when game-show host Farzad Hassani invited an audience member on stage to answer questions and repeatedly spoke to him in a belittling manner, causing a backlash in the Iranian media and on social media.