Popular sports host Adel Ferdosipour, who recently witnessed his show being taken off the air by hardliners in the state TV, has now launched a new show on the internet. 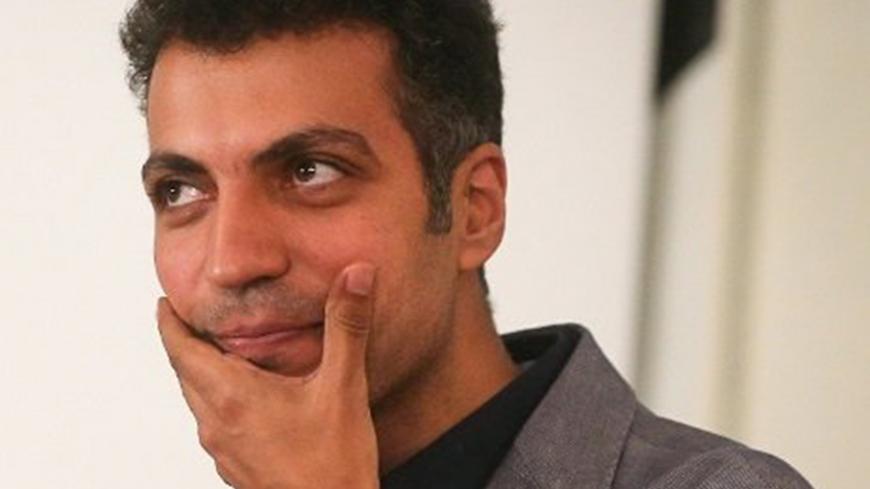 Adel Ferdosipour, a permanent fixture on Iran’s state TV for two decades, has launched a new show on the internet. Posted Dec. 24, 2016. - Twitter/@wsoccertalk

Adel Ferdosipour, one of Iran's most popular sports hosts, has flexed his muscles against Iran's hard-liner-controlled state TV by launching a new show on the internet.

Ferdosipour, chosen as one of “the 20 most powerful people in Iran” by Newsweek in 2009, had been a permanent fixture on Iran’s state TV for two decades. Twenty years ago, he kicked off his career with a soccer show called “Navad” ("90," in reference to the length of a soccer match) on state TV’s Channel 3. Armed with a creaky voice, a mop of curly hair and a wicked sense of humor, he relentlessly questioned the Iranian soccer clubs’ managers, focusing on the longtime troubles and corruption scandals surrounding Iran’s soccer. Ferdosipour gradually turned into the most popular host with big enemies but mass appeal with the viewers. According to a survey conducted by ISPA, a polling institute affiliated with the semi-official ISNA news agency, in 2019, 51% of Iranians watched “Navad."

Despite his popularity, his acid tongue — which targeted social and political issues as well as soccer — earned him the ire of the country’s hard-liners. His special “soccer interview” with Foreign Minister Mohammad Javad Zarif was stopped from being aired by the channel’s new hard-line management. Though the popularity of his Monday show made him impossible to fire, particularly in the last two years as the hard-liners successfully tightened their grip on state TV, his job was made more difficult.

In 2018, a new generation of radicals was named as the new managers of various TV channels, and Ali Foroughi became the manager of Channel 3, the most-watched channel of Iran.

The Islamic Republic of Iran Broadcasting (IRIB), Iran's state TV, has the sole monopoly over domestic radio and television services and has been independent of successive Iranian governments. The head of IRIB is appointed by Supreme Leader Ayatollah Ali Khamenei. Its viewers have sharply declined since 2009, as people have lost their trust in it and find its programming boring and far too biased.

Since his first days as the new director of Channel 3, Foroughi has put a spoke in Ferdosipour’s wheel by preventing a number of his famous guests, including ex-Barcelona player Carles Puyol, from appearing in his shows. Unlike his predecessors, Foroughi took Ferdosipour’s show off the air in March 2019, despite serious public outcry. The radicals’ hatred of Ferdosipour and “Navad” is to the extent that they removed a scene from "Pezhman" comedy show in which the actors mentioned “Navad.”

But it would not be easy to fade "Navad" and Ferdosipour into oblivion. “They [the hard-liners] think the public would forget Ferdosipour and wipe away the public memory by [resorting to such censorship]. No, 'Navad' and [Ferdosipour] are part of Iran and TV history and they can’t be wiped away,” a commentary on the moderate website Asr Iran stated on Dec. 25, 2019. “Censorship, not allowing [Ferdosipour] on-air and another thousand things to make [Ferdosipour] not being seen are just like beating a dead horse.”

Meanwhile, the media reported that the Saudi-funded Iran International TV channel offered Ferdosipour to host a soccer show, but that he had turned down the invitation.

Nine months after the suspension of “Navad,” Ferdosipour reunited with his fans, but not on a TV screen. On Dec. 16, 2019, the first episode of “El Clasico” was uploaded on Filimo and Namawa, two streaming services that are the Iranian versions of Netflix. The show reached around 3 million viewers in just one week, setting a new record. Although the number of viewers was for sure higher than this official figure, as many of those 3 million viewers watched the show with their family members and friends, and lots of others viewed it on social media and YouTube.

The show wasn’t hosted by Ferdosipour himself, but he was the director and the producer. His choice of guests mainly consisted of the sportsmen who have boycotted state TV, such as Iranian soccer legend Ali Daei and popular Esteghlal club player Voria Ghafouri along with the banned comedian Amir Mahdi Jule. While the combination of the guests was meaningful, people rushing to watch the show in large numbers was a demonstration of anger and defiance by people against Foroughi and other radicals who deprived the public of its favorite show.

Following this show's airing, a number of Iranian news websites and papers gave the news of the '"El Clasico" launch with the headlines such as “A new rival for [state TV],” “Ferdosipour, the instigator of the collapse of the [state TV] monopoly” and “Knocking out Foroughi.”

“This proved that the monopoly [of state TV] might be coming to an end. Although some experts believe that with the advent of satellite networks, the monopoly of [state TV] had already ended, 'El Clasico' proved that nonpolitical and [entertainment-seeking] viewers can now enjoy TV shows on the internet,” wrote Iran’s government-run IRNA news agency on Dec. 28.

Feeling the heat, the hard-liners and their media networks began downplaying the importance of the new success of Ferdosipour. Khorasan newspaper wrote on Dec. 30 that Ferdosipour did not burn all his bridges because he did not appear as the host of "El Clasico.” The paper added that “‘El Clasico’ was supposed to be a tool for Adel Ferdosipour’s deal with [state TV]."

Meanwhile, Ferdosipour’s initiative apparently angered his opponents in state TV. On Dec. 31, Morteza Mirbagheri, deputy head of Iran’s state TV, emphasized that no show by the name of "Navad" will be shown ever again.

Currently, it is not clear if Ferdosipour would continue producing the next episodes of “El Clasico” or not, but whatever goal he had, his online show served as a warning to the monopoly of state TV, as everyone is now hopeful that the power of the internet and social media would bring state TV to its knees soon.