A younger generation of hard-liners in Iran are increasingly maneuvering to secure institutional instruments of power and are targeting the state broadcaster. 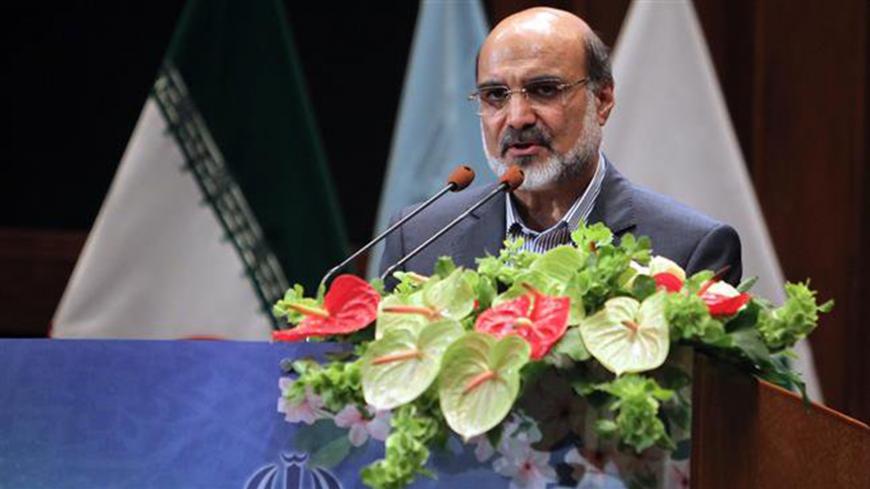 Abdulali Ali-Asgari, chairman of the Islamic Republic of Iran Broadcasting, gives a speech in Tehran, Iran. Posted May 17, 2018. - Twitter/@PressTV

The recent appointments of new managers at Iran's conservative-dominated state broadcaster may indicate that the organization is about to adopt a more hard-line position. This comes as a number of powerful moderate officials at the Islamic Republic of Iran Broadcasting (IRIB) have been weakened lately.

IRIB has a monopoly over domestic radio and television services, and has more than 50 channels, with the most-viewed channels being Channels 1 through 6.

Conservative Abdulali Ali-Asgari is the current chairman of the state broadcaster, and like his predecessors, is directly appointed by Supreme Leader Ayatollah Ali Khamenei.

Successive elected administrations have had no control over IRIB and commonly complain about the broadcaster’s coverage of their performance. State television has adopted a belligerent stance against the moderate government of President Hassan Rouhani, which took office in 2013, and has sought repeatedly to challenge and undermine government officials in public. However, the politicization of the state broadcaster has over time distanced the public from IRIB, resulting in the loss of a large number of viewers.

In 2014, a new channel named Ofogh (Horizon) was established, focusing on "the concepts of Islamic Revolution, the Holy Defense [1980-88 Iran-Iraq War] and regional developments."

The channel is managed by the new generation of hard-liners, who are vehemently against the Reformists and moderates. Since its inception, Ofogh has broadcast various documentaries angled against government policies — including the nuclear negotiations that led to the signing of the Joint Comprehensive Plan of Action and indeed the nuclear deal itself. The channel has some well-known talk shows that appear to mostly pursue the single goal of weakening the conservatives' political rivals.

The younger generation of hard-liners who control Ofogh are now determined to expand their domain to the entirety of IRIB, and in the process of doing so, eliminating moderates and other members of the entourage of parliament Speaker Ali Larijani, who has been a close ally of Reformist-backed Rouhani in recent years. For a decade, Larijani was the chairman of IRIB; his tenure ended in 2004. While he had adopted hard-line positions during his chairmanship of the state broadcaster, he gradually turned moderate upon leaving the organization.

The first serious triumph of the younger hard-liners at IRIB was their securing the chairmanship of Channel 4. Last year, Masoud Moinipour, a graduate of Islamic jurisprudence from Baqer-al-Olum University in the holy city of Qom, replaced moderate Reza Pourhossein. Since then, the hard-liners have begun to exert a high-profile presence at the channel. For example, hard-line activist Payam Fazlinejad recently started a political show, challenging liberal and Reformist figures and thinkers.

The second, and perhaps most important, achievement of the young hard-liners at Ofogh TV was their gaining the control of the most-viewed channel of IRIB. In April this year, hard-liner Ali Forughi took charge of Channel 3, replacing moderate Ali-Asghar Pourmohammadi, who is one of the veterans of Larijani’s old entourage at IRIB.

Prior to his appointment, Foroughi headed the Basij base at IRIB and served as a director at the cultural and social department of the paramilitary Basij Organization. Foroughi is a law graduate of the conservative-controlled Imam Sadeq University, where many hard-line elites are trained to become “revolutionary managers” for the country.

The new generation's third and fourth move occurred concurrently as two hard-liners were appointed to lead Channels 1 and 5. Majid Zeinol-Abedin, a senior editorial member of the hard-line news show "20:30" at Channel 2, was last month named as head of Channel 1, and the "revolutionary" Seyyed Javad Ramezan-nejad, who previously headed Ofogh TV, was chosen as the chairman of channel 5, which is known as the channel of Tehran province.

In reaction to criticism of these moves, the hard-line Tasnim News Agency quoted a senior manager of the state broadcaster as saying July 5, "Fortunately, the managers of the main channels of IRIB, which have many viewers, and people follow the shows and series of Channels 1, 3 and 5, have been selected from the talented and reputed young media [activists]."

The senior manager added, "Some do not welcome these appointments, because they don’t tend to see the national media progressing" and indicating that opponents have been influenced by the West and "are attempting to question these fitting and intelligent appointments."

With the rise of young hard-liners in recent months, the influence and effects of their presence in the main channels of the state broadcaster have become increasingly overt as strict policies, censorship and politically motivated shows have increased. For instance, Channel 1 recently aired the "confessions" of teenage Instagram influencers, including Maedeh Hojabri, who posted short clips of her dancing on social media. The documentary showing the “confessions” stirred such controversy that the public relations chief of IRIB was forced to react. However, state television later claimed that the production and broadcasting of such programs are among the “people’s demands” from IRIB. Meanwhile, many interpreted this issue as an orchestrated plan by hard-liners to prepare the ground for blocking Instagram in Iran.

While the state broadcaster is becoming more hard-line, a number of moderate conservatives are turning against this approach. Mohammad Mohajeri, a moderate conservative, said June 1, "A hard-line spectrum of the conservative current has taken over control of the political issues at IRIB." He added, "IRIB has turned into a place for certain people and [followers] of a political group. If the [head of the broadcaster] manages to change this situation, IRIB will be saved."

As previously reported in Al-Monitor, a new generation of hard-liners or "innovative revolutionaries" are rising despite criticism from both moderates and Reformists as well as the old guard in the conservative camp. As a result of the hard-liners' maneuvering to conquer state TV, the approach and behavior of the IRIB is thus likely to become harsher in the future.