Why it's time to wake up to the occupation

The murder of the Dawabsha family was not the actual trigger of the current wave of violence, but another link in the long chain of incitement and hatred generated by the Israeli occupation. 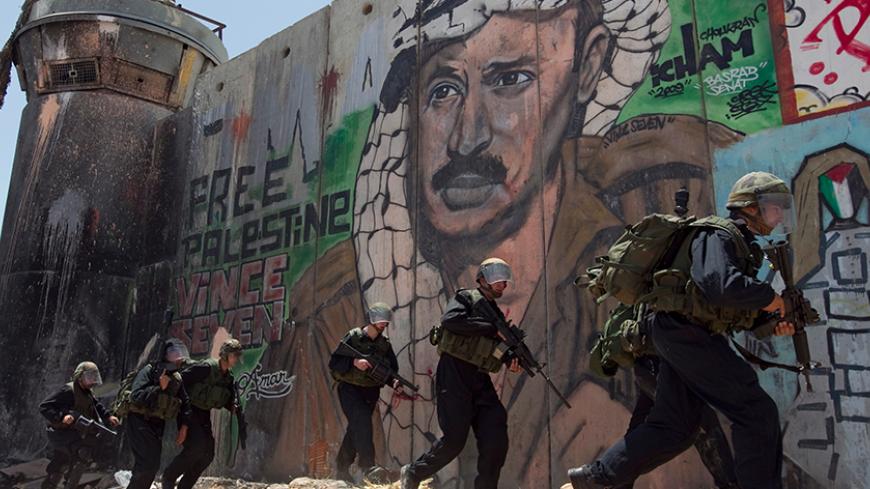 Israeli troops run to take their positions as demonstrators protest the occupation at the controversial Israeli barrier at Qalandiya checkpoint, near the West Bank city of Ramallah, June 5, 2011. - REUTERS/Darren Whiteside

Reports of arrests in the cruel arson attack on the Dawabsha family home in the West Bank village of Douma upgraded the assault to a major cause of the outbreak of the current wave of terror. In Al-Monitor on Dec. 9, Ben Caspit quoted a senior Israeli military official stating categorically that “there's no doubt” the seeds were sown when members of the Dawabsha family were burned to death in late July. According to the officer, that the murder has yet to be resolved, while the murderers of settlers Naama and Eitam Henkin were caught within four days of the gun attack on their car in early October, stirred up the unrest in the territories. It is hard to agree with the contention that the Jewish anarchists often called “hilltop youth” were the ones who triggered the latest round of terrorism. Rather, that fire was set by irresponsible politicians, who are now fanning the flames and throwing lit matches into the powder keg.

“What do you want from me?” retorted Shahar Ayalon, former Israel Police commander of the West Bank, when I asked him some 10 years ago why the police were unable to lay their hands on Jewish criminals from one of the outposts in the Hebron hills who were harassing their Palestinian neighbors on a daily basis. “Ask those who looked the other way when these guys invaded this hill. Ask those who paved the road to the outpost. Ask those who put up the poles to provide them with lighting, hooked them up to the electric grid and pay their utility bills. Ask who pays for their security.” The “those” to which he refers was clear: successive Israeli governments. Provisions for these settlers show up as official line items in the budget and in the resolutions of the Knesset's Finance Committee.

The Palestinians are well aware of the distorted reality in which the Israeli government is sloppy, at best, about enforcing the law against Jewish criminals, and at worst, encourages them. This was the case even before the Douma attack. It is no different today, and there are no signs of a change for the better in the foreseeable future. In fact, the signs point to the contrary. Despite some assessments that the Douma attack and what appears to have been a careless investigation were the causes of the current wave of terrorism, instead of lowering the flames, the political leadership fanned them. Ministers, Knesset members, senior police officials and other public figures publicly called for hurting or shooting those committing or suspected of committing knifings. The mayor of Jerusalem, Nir Barkat, encouraged his city's residents to take up arms.

Their agitation laid the groundwork for the Oct. 19​ “lynching” at the Beersheba central bus station of an Eritrean asylum seeker suspected of being a terrorist. In a few cases, in gross violation of the rules of engagement, security forces have shot and killed Palestinians who attacked Israelis or were suspected of doing so. Along with Palestinian violence against Jews, there has been an increasing number of attacks by Jews against Arabs and against Jews of a dark complexion thought to be Arabs. Some cities banned Arab workers from entering schools, and in several instances Arab passengers have been ordered off buses because they were suspected of being terrorists. Speaking on Army Radio, Police Central District Cmdr. Moti Cohen mentioned the attempted lynching of a suspect in the city of Rishon LeZion, saying, “The police coped with it and distanced the citizens from the scene. This was actually no less difficult … than ending the incident itself.”

A report by the Association for Civil Rights in Israel lists a series of provocative government measures since the start of the terror wave. The document, issued on the occasion of Human Rights Day, Dec. 10, cites among other things the government's decision authorizing the use of Ruger bullets against stone throwers in Israel and East Jerusalem; the issuing of administrative restraining and detention orders for dozens of Palestinians and Israeli Jews suspected of attacks against Palestinians; moving to revoke the permanent residency of East Jerusalem Palestinians and threats to rescind the citizenship of Palestinian citizens of Israel involved in violence, considered a “breach of trust”; and restoring a proposed bill that would allow police to stop people on the street for an invasive body search without probable cause. The authors of the report underline that these legal measures, adopted in haste during stormy times, erode human rights and the protections granted by democratic states to suspects and the accused, especially minors, and will continue to do so even after tensions abate.

Violence against the “other,” those who are “not like everyone else” or people suspected of deviating from the nationalistic-conservative-patriotic way has recently increased a notch. Rabbi Arik Ascherman was attacked for trying to prevent Jews from burning the olive groves of destitute Palestinians. The arson attack on the Church of the Multiplication, the “loaves and fish” church, in the Galilee was motivated by hatred of foreigners. Arsonists set fire to a bilingual school in Jerusalem because it seats Arab and Jewish children next to one another in its classrooms. Ethiopian protesters have been beaten by police with exceptional cruelty. Shira Banki, 16, was murdered during this year's Gay Pride Parade because she identified with the LGBT community. President Reuven Rivlin has been subjected to curses and even threats on his life because he dared condemn such hate crimes and expressions of racism. If this is how Israel's democracy conducts itself, what can one expect of the militarily occupied Palestinians and the inherently discriminatory regime across the Green Line?

The arson attack on the Dawabsha family home was unusual in its tragic outcome, but many such attacks have occurred for years, luckily for the most part without loss of life. Just as the 1987 traffic accident in Gaza, in which four Palestinian laborers were killed, was not the actual cause of the first intifada, and then-Prime Minister Ariel Sharon's 2000 visit to the Temple Mount was not the real cause of the second intifada, so too the Douma affair is not the cause of the current wave of violence. One can call what is happening an intifada, a wave of terror or a round of violence. One can blame Palestinian incitement, the stalemate in the diplomatic process or the weakness of enforcement authorities. Regardless, until the Israeli public understands that the occupation does not beget security, calm will be elusive. As long as Israel is ruled by a leadership that deepens Jewish rule over the Palestinian people, the grip of racism and hatred will tighten.