Family members of Jewish terrorists can rest assured that the Israeli government won't subject them to the same policy of demolitions as punishment it uses against Palestinians. 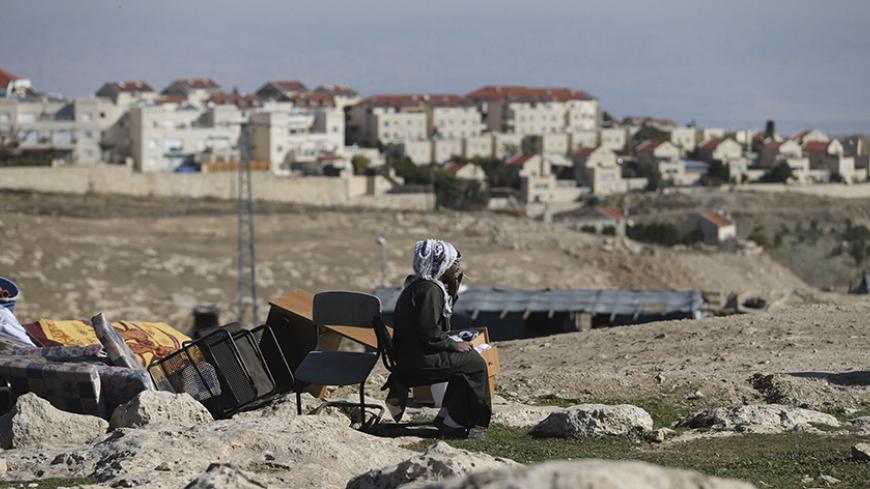 A Palestinian man smokes a cigarette as he sits near his belongings after the Israeli army demolished his home, near the Israeli West Bank settlement of Maale Adumim, near Jerusalem, Jan. 6, 2016. - REUTERS/Mohamad Torokman

Amiram Ben-Uliel was charged this week with the July murder of the Dawabsha family in the West Bank village of Douma. If convicted, Ben-Uliel, 21, who is married and a new father, will likely spend the coming years behind bars. If he is granted furloughs, he will be able to visit his Jerusalem apartment and his parents’ home in the settlement of Karmei Tsur. The Ben-Uliel family’s neighbors needn’t fear that explosives experts will come to their neighborhood or that the force of a blast will crack their walls and shatter their windows. The neighbors of Yosef Haim Ben-David, accused of killing Palestinian teenager Mohammed Abu Khdeir in July 2014, needn’t worry, either. If Ben-David is convicted, he can expect life imprisonment, but his family home will remain intact. And that’s for the best.

These two vicious terror attacks set off waves of violence that have resulted in the deaths of dozens of Israelis and Palestinians. And we have not seen the end of it.

On Jan. 4, the prime minister declared on the Knesset podium that “Terror is terror is terror.” It stands to reason, then, that the law is the law is the law. And the law says that a punishment shall be a punishment shall be a punishment. But that is not the case in the West Bank's Areas B and C, under Israel’s military control, and in Area A, under Palestinian Authority control. Also, despite Jerusalem being under Israeli law (and not military law), only the families of Palestinian attackers are losing their homes in the eastern part of the city. The families of Jewish perpetrators are not. Last November, the Israel Defense Forces blew up four houses in the Palestinian city of Nablus and in the village of Silwad. They were the residences of the four men charged with the Oct. 1 murder of the Henkins near the settlement of Itamar, and the June 29 murder of Malachi Rosenfeld in the Binyamin region (none of them, just like Ben-Uliel and Ben-David, have been convicted yet). Old people and babies were thrown out of their homes into the rain and cold. The parents paid for the sins of their sons.

In a December 2014 ruling on home demolitions, Supreme Court Justice Noam Solberg discussed the claim that the government practices discrimination on the grounds of nationality in its use of Emergency Regulations, a legacy of the British Mandate in Palestine, to demolish these homes.

“While one cannot deny that there are, indeed, incidents of attacks by Jews against Arabs,” the judge wrote. Solberg cited the “terrible murder of Mohammed Abu-Khdeir, not to mention the shocking murder of the Dawabsha family members.” Nonetheless, Solberg argued that there is no justification for equal rulings against an Arab terrorist and a Jewish terrorist, saying that whereas Jews aren’t incited to attack Arabs and condemn such acts “across the board” and in a determined and assertive manner, the same cannot be said of the other side. Therefore, the judge explained, “In the Jewish sector there is no need for such broad deterrence, which is the purpose of house demolitions.”

Does the Jewish population, unlike the Palestinian one, indeed firmly and assertively denounce Jewish terrorists, as Prime Minister Benjamin Netanyahu often says? Is it true that Jews don't incite? They would do well to peek occasionally at the social networks and glance at the online commentary, which daily calls for “death to Arabs,” encourages revenge attacks, curses the name of the Prophet Muhammad and incites against Arab soccer players. Let's not forget the prime minister’s unforgettable words on the last election day that “Arab voters are coming out in droves to the polls.”

It would be interesting to hear what the honorable justice and the prime minister would say if a Palestinian terrorist had gotten his own national television show, been appointed editor of a newspaper or become a columnist for important newspapers. Human rights activists and members of watchdog organizations will soon be required to wear a badge identifying themselves when visiting the Knesset. But absent a similar law requiring convicted terrorists to wear a badge, few viewers of the Knesset Channel and readers of the newspapers Makor Rishon and Maariv will remember that the TV anchor and opinion writer Haggai Segal (Makor Rishon's editor-in-chief) is a terrorist convicted of causing grievous harm, illegal weapons possession and membership in a terror organization. Segal was arrested in 1984 with other members of the Jewish Underground and sentenced to five years in prison, two of them suspended. He ended up serving two years.

The Jewish zealots embarking on arson sprees in Palestinian villages are inspired by the legends of the Jewish Underground active in the 1980s. They remember that then-President Chaim Herzog couldn't withstand the political and public pressure exerted on him and granted clemency to the Jewish Underground prisoners, including those sentenced to life in prison for murdering three Palestinian students and for maiming two West Bank mayors. Herzog commuted their sentences three times. With their time further shortened for good behavior, they were released from prison after seven years.

Along with the moral issue of punishing parents (and often neighbors as well) for the sins of their grown children, discrimination in punishments for nationalist crimes and the questionable legality of demolition as a punishment, there is disagreement over its effectiveness as a deterrence. Haaretz military analyst Amos Harel wrote in 2005 that the IDF presents cases of families turning in their sons before they headed out to commit attacks, explaining that they were motivated by fear that the army would demolish their homes. But, he noted, there have apparently been no more than 20 such cases throughout the years of conflict.

Harel also wrote that an internal IDF study published at the end of 2003, after 1,000 days of clashes in the second intifada, concluded, “To date, there is no proof of the deterrent effect of house demolitions.” According to the study, several months after the IDF started razing homes, the number of terror attacks increased. Maj. Gen. (res.) Yitzhak Eitan, who served as head of the Central Command at the height of the intifada, said that home demolitions provide an incentive for revenge attacks. A military commission headed by Maj. Gen. Udi Shani that studied the demolition policy in 2005 recommended the practice be stopped because the damage from the hatred it promotes outweighs the benefits. The recommendations were presented to Moshe Ya’alon, then the IDF chief of staff.

Today, Defense Minister Ya’alon is one of the leading proponents of the demolition policy — only for houses of Arab terrorists, of course. As his coalition colleague Knesset member Bezalel Smotrich said, “Jews cannot be terrorists.”