An Israeli court sentenced to life imprisonment the Jewish settler behind the 2015 arson attack in the village of Duma in the northern West Bank, which killed three members of the Dawabsha family, but the family says the court’s decision is not enough. 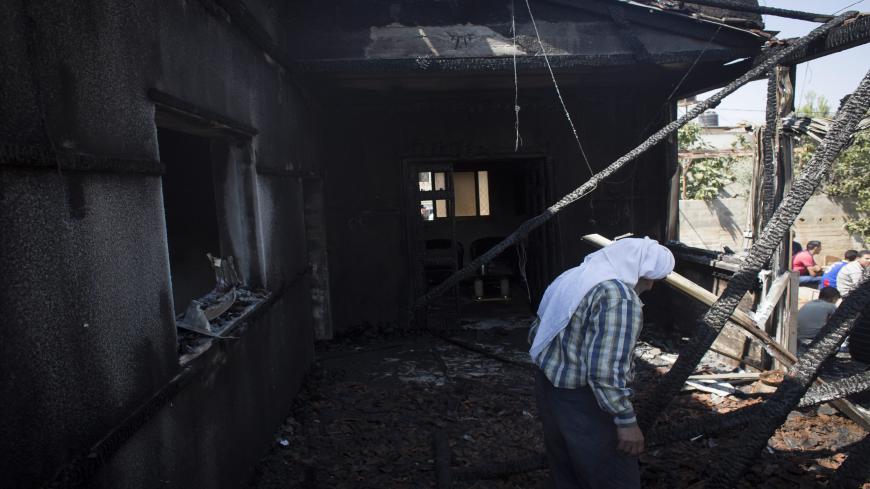 Family members and relatives of 18-month-old baby Ali Dawabsha view the remains of their house after a fire that was suspected to have been set by Jewish extremists, Duma, the West Bank, July 31, 2015. - Oren Ziv/Getty Images

RAMALLAH, West Bank — Ahmed Dawabsha, a 10-year-old Palestinian from the village of Duma in the northern West Bank, is getting ready to go back to school on Sept. 20.

When he learned that he had to wear a face mask as a protective measure against the novel coronavirus, Ahmed broke into tears. “How would I put on a face mask and I don’t have an ear,” he sobbed.

Ahmed is a member of the Dawabsha family, whose home was firebombed in the Duma arson attack by a group of Israeli settlers in 2015. The family home was set on fire at night, resulting in the death of Ahmed’s younger 18-month-old brother Ali and his parents, Saad and Riham, who died of their wounds weeks later. Ahmed, four years at the time, survived but suffered severe burns on his head, face and body.

Ahmed Nassr Dawabsha, the child’s uncle, told Al-Monitor, “Ahmed’s right ear was completely burned off [in the 2015 attack]. He was getting himself ready to go back to school. He prepared his new clothes and backpack. He tried to put on the mask but he could not. He collapsed and cried for five hours. We tried to calm him down. He said that he feared that he would be bullied by children at school.”

On Sept. 14, Israel’s Lod District Court handed Amiram Ben-Uliel, a Jewish settler, three life sentences and an additional 20 years in prison for the killing of the Dawabsha family members, and was convicted of throwing an explosive device in the family’s home.

The court also ordered Ben-Uliel to pay nearly 1 million Israeli shekels ($292,000) in compensation for Ahmed, but his uncle told Al-Monitor that the court’s rule will remain a dead letter since the convicted does not have this kind of money.

He said that the rule was issued after five years of reluctance and playing for time in the hope that the family would drop the case. “We, however, did not let go and remained persistent to bring the killers to justice. We have attended over 100 court sessions until we were able to obtain this judgment,” Dawabsha said.

The family has not been content with the court’s rule against Ben-Uliel, as it acquitted him in May of the charge of belonging to the so-called Hilltop Youth, which is an extremist settler youth group based in areas of the West Bank. They continuously attack Palestinians and their property as they believe Palestinians have “to pay the price” for taking over the “Holy Land” and must be expelled.

“We already rejected the court’s decision to acquit Ben-Uliel from belonging to the terror group. We will refer to the Israeli Supreme Court to reinstate the charge against him,” Dawabsha said.

He stressed that “the life sentence against the killer does not mean anything. This will not bring back to life Saad, his wife and their toddler. It will not heal Ahmed’s psychological and physical wounds. We will refer to the Supreme Court to have it condemn the group and the system that created this settler.”

He noted, “This [Jewish] settler lives on Palestinian land that they [the settlers] seized by force, fully assisted and protected by the Israeli government and army. The settlers have been provided with all the necessities of life, including electricity and water, and were allowed to colonize our lands and monitor our homes and to sneak into our village at night like bandits and carry out a firebomb attack on our home. This group must be condemned."

Dawabsha added, “According to the internal law, we are under occupation and the protection of civilians is the responsibility of the occupying power, which has failed to do so. We will not rest until this group is condemned and until we obtain court rulings that would be a lesson to these people and deter others from committing such acts. The killer’s house must be demolished and his nationality revoked.”

The village of Duma is located in Nablus governorate in the northern West Bank and is one of the most attacked areas by settlers, namely at the hand of the Hilltop Youth, which is active there, according to Dawabsha.

Despite the court’s decision, the legal battle for the Dawabsha family has not yet ended, as the family is not only going to the Israeli Supreme Court but is also following up on another case in the city of Jerusalem that it filed against the State of Israel in 2016, to pay compensation to the family.

“The sentence to have the killer pay nearly 1 million shekels in compensation will not happen as he does not have the money. We have initiated a legal case against the Israeli government in 2016 because it is responsible since it allowed him to stay on this land, providing him with the standards of living, and therefore it [the state] has to compensate the family. This is a different case than the one in which we obtained the [life sentence] ruling,” Dawabsha explained.

Commenting on his nephew’s stance on the court’s decision, Dawabsha, who has been attending court sessions over the past five years, said, “Ahmed has not been to any session. He was supposed to face off with the killer and testify against him before the court on June 9, but he could not and did not attend.”

“This killer deserves nothing less than death, because if he ever gets out he would burn another family,” he said.

Since the arson attack, the 10-year-old orphan has been living with his grandparents, also in Duma. He has been refusing to visit his parent’s burned house. Ahmed’s treatment may take 10 years.

“His right ear needs complete reconstruction, which takes years. Sixty-five percent of his body is made of plastic skin. [The attack] has had a heavy psychological toll on him. He has been in a daily struggle with himself. ‘Why did they burn us? Why did they kill us?’ he keeps wondering,” the uncle lamented.

Despite his immense hardships, Ahmed is trying to cope and to lead a normal life. He is a top student and practices his favorite hobby of horseback riding and hurdling. He trains in a nearby village. He also loves to draw.

Five years after the crime, its effects are still visible on Ahmed’s body and face and on his family’s house that is still blackened by the fire. The Dawabsha family seeks to turn the house into a museum so it remains a proof of the horrific crime. They donated the house and its land to the Palestinian government for this purpose, awaiting funding for the museum project.