Israeli politicians are asking to revoke the citizenship of the Palestinian arsonists, even though international law prohibits leaving a person without citizenship. 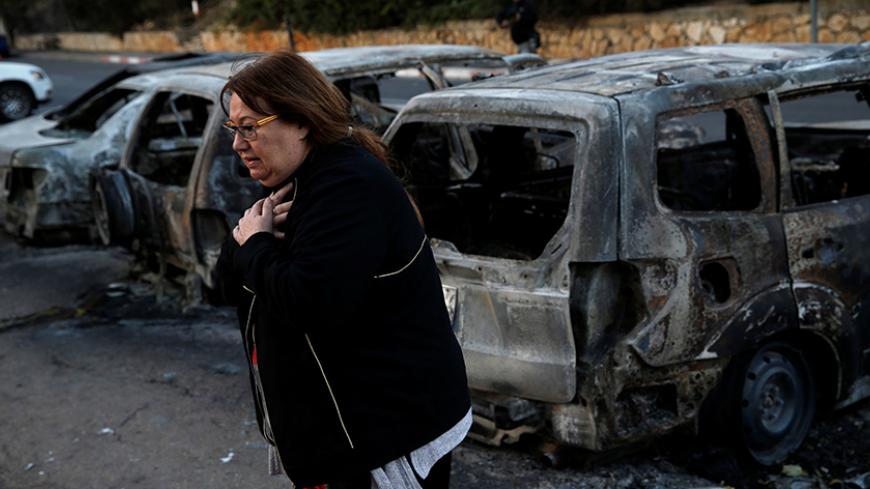 A resident stands next to cars burned during fires in the northern city of Haifa, Israel, Nov. 25, 2016. - REUTERS/Baz Ratner

Israel has experienced many forms of terror in the past: the rock and Molotov cocktail intifada (1987-1993), and the suicide bomb and shooting attack intifada (2000-2005), followed by roadside charges, abduction of soldiers, use of missiles and recently the individual intifada that broke out in October 2015 and mainly involved knife attacks. But an arsonist intifada — terror focused on igniting fires — is something that had not been experienced before.

From information gathered so far it seems that the wave of fires that Israel witnessed in the third week of November was to a large extent premeditated and related to Palestinian nationalism. This fire wave was facilitated by extreme weather conditions: a winter that has not yet begun; rain that has not yet made an appearance; dry and flammable shrubbery; and especially dry eastern winds that stir up the fires. With such conditions, only one spark is needed to set an entire forest on fire, or even a large city. And in many instances, the arsonists acted on their own initiative. It was a miracle that no lives were lost. Israel used dozens of firefighting aircraft from nearby and remote countries, including the famous "Supertanker" from the United States, at great expense. It is clear that next time it could be a lot worse.

It all started Nov. 23 with a large fire in the northern city of Zichron Yaakov that caused great property damage. The following day, when a giant fire erupted in Haifa, Israel's third-largest city, many Israelis felt a troubling sense of deja vu: Exactly six years ago, on Dec. 2, 2010, a massive fire, later referred to as the Carmel tragedy, broke out. Forty-four people died in this deadly forest fire, most of whom were prison wardens who were evacuated from the Damon prison and then were trapped in a burning bus in the heart of the inferno. At that time, too, winter was delayed, but then the fire's cause was negligence.

This time, according to results of the investigation to date, what we witnessed was a large wave of arson-induced fires that threatened to burn down an entire country together with its inhabitants. The police are holding about 30 suspects: 18 Arab-Israelis and the rest Arab Palestinians. In light of the great destruction and damage that was caused — estimated to be in the billions of shekels — and in light of the new dangers posed by this unusual form of terror, a debate is underway on how to punish the arsonists. According to Prime Minister Benjamin Netanyahu, this terror is worse than other forms, and thus it must be addressed with great severity.

In principle, Netanyahu is correct. In some of the instances, only luck prevented the fire from causing numerous human casualties. Tens of thousands of people were evacuated from their homes in Haifa, and thousands were evacuated from other localities. At the same time as the Haifa crisis, many other fires started in different centers. These multiple fires were caused by humans; they were not organized or planned incidents, but spontaneous, improvised pyromania that took advantage of the dry winds and the opportunity to burn Israel with Molotov cocktails and improvised ignition devices.

At the same time, a large wave of joy erupted on the social media networks of the Palestinians and Arabs from nearby countries, who exulted that "Israel is on fire."

Minister of Public Security Gilad Erdan announced that he would consider demanding that the homes of the arsonists be destroyed, similar to the policy of Israel's security services toward terrorists. But Erdan's demand was only the opening shot in a public debate. Another demand has aroused even greater controversy: to revoke citizenship of Arab-Israelis who tried to set fire to localities or sites in Israel. This demand is even more problematic and controversial because these Arab-Israelis do not have dual citizenship. Revoking their Israeli citizenship would put them in an impossible situation and leave them without citizenship.

"Such a ruling would never pass the High Court of Justice," a senior Justice Ministry source told Al-Monitor on condition of anonymity. "It will not pass the test of international law or rules of warfare, and would create additional, heavy pressure on Israel from the global community. It would continue to undermine the legitimacy of the war against terror."

These legal assessments do little to calm the current atmosphere. Knesset members and ministers, mainly from the right, continue to declare that the state must expel those who are trying to set their country on fire. On the other side stand a few left-wing Knesset members, who ask a simple question: What about Jews who set fire to, or burned, Arab Palestinians? Recent years have seen quite a number of such cases. In one incident, in July 2015, an extremist right-wing cell threw a Molotov cocktail into a house in the West Bank village of Douma in which a Palestinian family slept, causing the deaths of the parents and their small child.

In 2014, following the discovery of the bodies of the three Israeli teens who were abducted in the West Bank, three Israelis set fire to Mohammed Abu Khdeir, a young Arab from East Jerusalem, causing his death. There was also the torching of the bilingual school in Jerusalem by ultranationalist Jewish agents, and many cases of settlers setting fire to fields and orchards of Palestinians. "If citizenship is revoked for Arabs who set fire to Jewish areas, then this same step will have to be taken against Jews who set fire to Arab areas. Otherwise, the principle of equality will suffer a major hit," a left-wing political source told Al-Monitor on condition of anonymity.

This contention of the left does not satisfy the right. Education Minister Naftali Bennett told Al-Monitor this week, "What we are seeing is a countrywide phenomenon, not an isolated incident. When Jews will set fire to dozens of Arab localities all at once — during the most dangerous, incendiary time of year — then one could try to compare circumstances and punishments." According to Bennett, the state can adopt harsh, special means of punishment to suppress a pervasive and spreading phenomenon.

One way or the other, the sights we saw during the five days of conflagration were unique: Jews and Arabs worked together to put out the fires, shoulder to shoulder. The Palestinian Authority sent numerous fire-fighting teams to help out, and Netanyahu called Palestinian President Mahmoud Abbas to thank him. Egypt and Jordan sent fire-fighting helicopters. Many Arabs opened their homes to Jews whose property had gone up in flames. Vis-a-vis all this heart-warming solidarity stand those suspected of arson — some of whom were caught red-handed, and all of whom were trying to poison the relations between Jews and Arabs.

The first rain is supposed to arrive, finally, in the coming days, to drown all this in lots of water. Unfortunately, it will be too late.