Riots are spreading from the Temple Mount to East Jerusalem, causing more deaths and injuries, but neither Prime Minister Benjamin Netanyahu nor Palestinian President Mahmoud Abbas offer any new solutions. 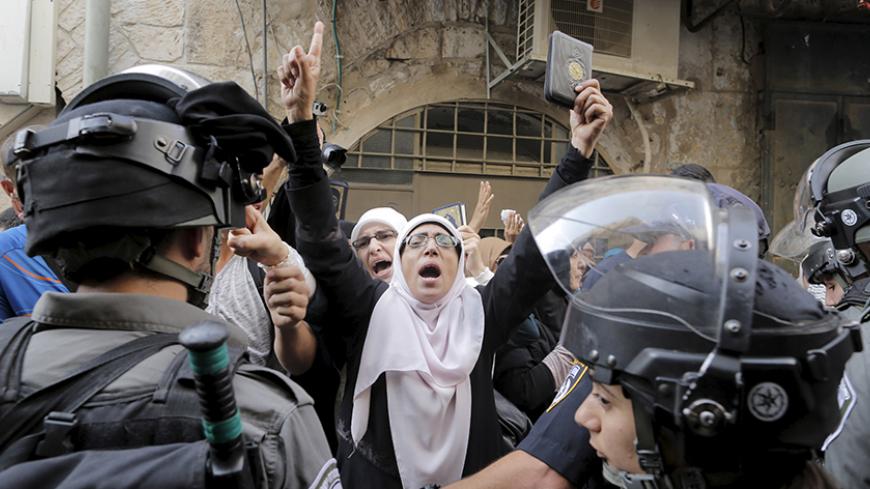 There’s been a lively debate in Israel over the past year as to whether the country is on the verge of a third intifada. There are great arguments for and against. The debate intensifies whenever violence erupts, and dies down when things return to a state of relative normalcy. And while this argument is underway, circumstances dictate the reaction. Each intifada was different (the first was one of rocks and knives, while the second involved suicide bombers), and there can be no doubt about the current reality. These are not normal times.

What has been happening in Jerusalem over the past year and spreading to other places every so often is a type of intifada, even if it hasn't been described or defined as such. Nevertheless, it is alive and kicking, and no one seems to have any control over it — not Palestinian President Mahmoud Abbas, not Israel and not even Hamas, which is investing its best efforts in fanning the flames.

On the evening of Sept. 13, as the Jewish New Year was getting underway, Alexander Levlovich, 64, died in Jerusalem when his car was battered by a volley of rocks in the south of the city. The stone throwers, who came from the Palestinian village of Sur Baher, attacked many other cars driving along the road connecting their village to the Jewish neighborhood of Armon HaNetziv. As the rocks started raining down on him, Levlovich lost control of his vehicle, crashed into an electrical pole and was killed. Two young family members in the car with him were injured.

The phenomenon of stone throwing and Molotov cocktails, which has been growing in the greater Jerusalem area, is the less pressing problem, at least as far as Israel is concerned. As has already been reported in Al-Monitor, the center of all the tension and the source of all the incidents is the Temple Mount. It is the most potentially volatile powder keg in the Middle East, if not the entire world.

Accounts of the incident spread quickly throughout Jerusalem. The familiar call of “Come save Al-Aqsa!” echoed across the Old City and the Palestinian neighborhoods of East Jerusalem. The alleyways of the Old City turned violent throughout the entire Jewish New Year holiday, with Palestinians attacking rabbinical college students on their way to the Western Wall and police officers on patrol.

According to Palestinian accounts, more than 60 people were injured over the course of those two turbulent days. Rioting expanded to almost all the neighborhoods of East Jerusalem, including Isawiya, Silwan, the Shuafat refugee camp, Kalandia and Ras al-Amud, among others. The bottom line is that East Jerusalem is burning. The flames may be low, at least for now. So far, the weapons of choice are rocks and Molotov cocktails, and there are random stabbings. Still, if we have learned anything from living in this region it is that even a small fire can quickly become a major conflagration.

The main problem faced by both sides is an utter lack of hope. The first intifada contributed to the fall of Prime Minister Yitzhak Shamir’s government in 1992. A later reaction to the violence was the Oslo Accord of Prime Minister Yitzhak Rabin. He realized how dangerous the status quo was to Israel and decided to do something about it. The second intifada forced Israel to launch Operation Defensive Shield and build the separation fence. Eventually, Prime Minister Ariel Sharon disengaged from the Gaza Strip and evacuated four settlements in northern Samaria as a gesture to the Palestinians, who responded with even more terrorism and violence. There were several attempts to reach an agreement since then. There was former Prime Minister Ehud Olmert, later Minister Tzipi Livni and even later, US Secretary of State John Kerry and special envoy Martin Indyk. Nevertheless, the conflict has proved that even incessant dedication to the cause coupled with an impressive dose of determination is not enough. The dam has yet to be breached.

What are people supposed to do now? There is currently no diplomatic process, and the chances of there being one in the foreseeable future are rather slim. It is true that Prime Minister Benjamin Netanyahu announced in London and Italy that he is ready to renew direct talks with Abbas immediately, but there isn’t a single person in Europe who believes that he is sincere. Concerned about a potential wave of anti-Israel boycotts and sanctions now brewing in Europe, Netanyahu is trying to wrap himself in a cloak of fictitious negotiations. While it is true that he went a respectable and even unprecedented distance in the negotiations conducted by the Americans in 2013-14, Netanyahu received no credit for that. The reason is that everything he did was kept under wraps to allow him plausible deniability and a chance to issue a public rejection of any concessions that he may have made as soon as the negotiations blew up. But now he attempts, unsuccessfully, to renew his international credit line.

Abbas is also caught in a trap. He has no diplomatic solution on the horizon, Hamas is pressuring him from Gaza and the international community has lost interest in his problems. Today, they are much more concerned about events in Syria, Iraq, Yemen and Libya, and especially by the refugee crisis in Europe. Abbas is now considering resigning, or declaring that the Oslo Accord is canceled, or doing nothing and going with the flow. He doesn’t have many other options.

Faced with these problems, the Israeli government is trying to cover the growing cancer with Band-Aids. Recently, Defense Minister Moshe Ya’alon signed an order banning the Palestinian “Mourabitoun” and “Mourabitat” groups operating on the Temple Mount and declaring them “unlawful organizations.” These are separate groups of men and women who position themselves in the Temple Mount mosques throughout the entire day. Their job is to start screaming, rioting and breaking into violence whenever Jewish visitors ascend to the site. At least that is how it looks to Israelis. According to the Palestinians, they are “defending the Temple Mount.”

On the eve of the holiday, Internal Security Minister Gilad Erdan proposed that judges not be promoted if they offer light sentences to Palestinian stone throwers. Erdan is furious about the relatively light sentences that Israeli courts currently impose on Palestinians, particularly younger Palestinians, caught throwing stones at Israelis. “Stones kill. That has long been proved, and is proved each time anew,” said Erdan. Nevertheless, he immediately came under severe criticism by Chief Justice of the Supreme Court Miriam Naor, who said that his proposal was harmful to democracy.

And what does Netanyahu say? He has already called two emergency meetings in his office over the past few days. One was the night of Sept. 15, as soon as the holiday came to an end. For now, at least, Netanyahu has rejected Erdan’s proposal. “We will use all necessary means to fight against those who throw stones, firebombs, pipe bombs and fireworks in order to attack civilians and police,” said the prime minister. “On the eve of the holiday it was again proven that throwing stones can kill. Such actions will be met with very sharp punitive and preventive responses,” Netanyahu promised.

At the discussion over which he presided, it was decided to adopt an even more severe approach in a number of specific areas. Possible measures included reassessing orders for opening fire, setting minimum sentences for the aforementioned offenses and imposing steep fines on both any minors involved and their parents.

Netanyahu’s response seems especially stern and portentous, at least on the surface. Nevertheless, anyone familiar with the situation knows that it has all been said before. Each one of these measures has been already examined, considered or implemented on the ground. They offer no solution. They will not change the reality we face. Israel and the Palestinians are stuck together in the same powder keg, and as of now, at least, no one has any cold water to keep the encroaching flames in check. What people do have is oil and gasoline — and plenty of it.