Why Israeli politicians choose not to call for 'peace'

The murder of Alexander Levlovich by stones thrown at his car provoked Israeli politicians into superficial statements on security, instead of prompting a public debate over ways to solve the Israeli-Palestinian conflict. 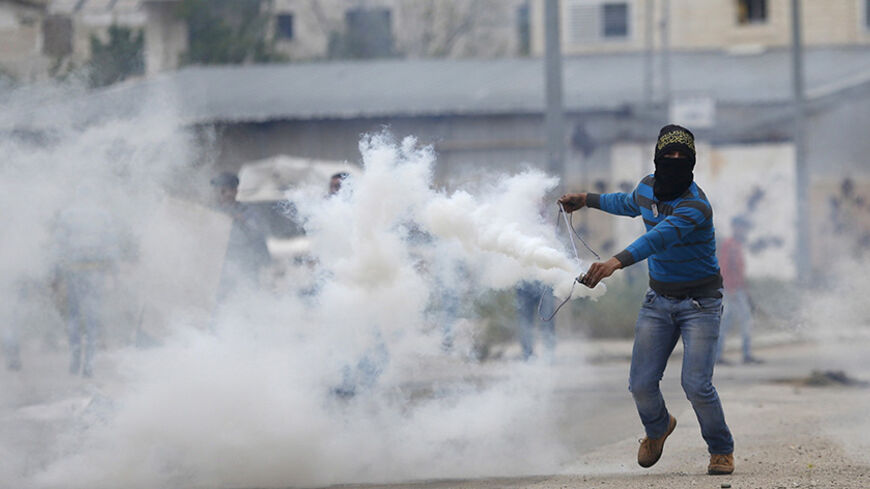 A Palestinian protester uses a sling to return a tear gas canister fired by Israeli troops during clashes near Israel's Ofer Prison, near the West Bank city of Ramallah, April 10, 2015. - REUTERS/Mohamad Torokman

Alexander Levlovitz was born in Jerusalem, where he died the night of Sept. 13, on the Jewish New Year, as he returned from his family's holiday meal. He was only 64, and when he died from a rock hurled at his car, on the very evening of the holiday that symbolizes renewal and hope, he unwittingly became a symbol of the Jewish year 5776, which only just began.

With no foreseeable end to the long conflict with the Palestinians, the Israeli public has a clear tendency to ignore anything that has to do with the powder keg it is sitting on. The last few election cycles have proven that Israelis' interest in ending the conflict, or at least trying to advance a solution, is extremely limited. Actually, since the breakdown of the conference at Camp David in October 2000, with the participation of then-Prime Minister Ehud Barak and the former chairman of the Palestinian Authority, PLO leader Yasser Arafat, and since the outbreak of the second intifada in September 2000, the faith of Israelis in the possibility of reaching peace with the Palestinians has gradually eroded.

While most Israelis want peace, and are willing to give up land for it, after more than 1,000 casualties from suicide attacks in Israeli cities during the second intifada, they stopped believing that it is possible. There was a time when the terms "peace" and "hope" would have been used to win elections. But after years of disappointment in diplomatic processes, terror emanating from the West Bank and unceasing rocket fire from the Gaza Strip following the 2005 disengagement led by former Prime Minister Ariel Sharon, Israelis have tired of it.

Analysts who study public opinion polls tend to say that "the Israeli public is leaning to the right." But if we examine these processes in-depth, we discover that Israelis have simply become jaded and stopped believing that another way is possible. That is the reason that anyone who wants to become prime minister these days distances himself from talk of peace. Even politicians such as Isaac Herzog, the leader of the Zionist Camp, and Yair Lapid, the chair of Yesh Atid — both senior leaders of the center-left camp — run far away from any diplomatic statement that might sound too leftist. This trend has become more pronounced since the landslide victory of Prime Minister Benjamin Netanyahu in the March 17 election.

In the case of Lapid and Herzog, it may be that their lack of security experience causes them to be careful not to speak in the language of compromise: Former Prime Ministers Yitzhak Rabin, Ehud Barak and Ariel Sharon, who were all generals, felt sufficiently self-confident to lead brave compromises with the other side. They had no need to prove that their turn toward peace did not come out of a fear of conflict. That is why in the press releases following the murder of Levlovitz, the leaders of the center-left warned of the escalation in Jerusalem and the decline in personal safety, but took care not to mention negotiations with the Palestinians at this time. After all, "the people lean to the right," and perhaps there is an election on the horizon.

The murder on the night of the Jewish New Year and the escalation on the Temple Mount should be an opening for a much more comprehensive debate than the question of whether there is a new "stone-throwing intifada" in Jerusalem. This attack at the beginning of the new year should bring up the public debate over the big question of the resolution of the conflict with the Palestinians — an issue that Netanyahu, with all his political prowess, has succeeded in dodging and in convincing the public of its irrelevancy, at the very moment that the Middle East is burning. But the truth of the matter is that even if Israelis try to bury their heads in the sand, the conflict will rear its head and will not let us ignore it.

According to statistics of recent months, the graph of violence in Jerusalem is on the upswing. While most rocks and Molotov cocktails thrown at Israeli cars do not cause any casualties, we can no longer ignore the real danger to the lives of Israelis in the capital. Residents think twice about driving on Route 443 on the way to Jerusalem and back (Route 443 links Tel Aviv to Jerusalem via the city of Modi'in, crossing also the West Bank), because it is no longer safe. On Sept. 16, Netanyahu toured this road and said, "The present situation is unacceptable and we intend to give soldiers and police officers the tools necessary to act very firmly against those who throw stones and firebombs."

The day before, the prime minister responded characteristically to the stone-throwing incident and the murder of Levlovitz. He called an emergency meeting at the end of the holiday, on Sept. 15, following which he was quoted as saying, "We won't allow stone throwing" and Israel "will use all necessary means" to stop it, while also saying Israel is committed to maintaining the status quo and law and order on the Temple Mount. The set of actions Netanyahu offers is not new. Netanyahu and his government indeed must work aggressively to end this terrorism, it is their duty. The solution offered by Minister of Public Security Gilad Erdan to set minimum punishments for stone throwing could help to deter young men from throwing rocks in East Jerusalem. But for all this to take place you do not need to convene a publicized emergency meeting at the end of the holiday. You could simply decide — and act.

Netanyahu needs this show, because the security talk helps his public image, and also because it is a well-known method for the prime minister to take some pressure off and give the public the sense that things are being addressed. Following every significant event or series of events, he holds an emergency meeting, at the end of which he proclaims belligerent declarations. In most cases, that is the beginning and end of his treatment of the event.

On the other hand, the opposition, too, is guilty of ineffective conduct. As expected, it demanded to hold an urgent recess debate on the escalation in Jerusalem (at the initiative of Yesh Atid). Herzog and Lapid attacked Erdan's initiative, which seeks to prevent the promotion of judges who pronounce more lenient sentences for stone throwers. They argued that this hurts the principle of the separation of powers and constitutes a political intervention in the affairs of the courts, and blamed the prime minister for the security deterioration. All the same, they have not succeeded in explaining the alternative they offer.

Herzog, who has shown some courage in the suggestion last week that Israel should accept some refugees from Syria, had to lower his profile after polls showed most of the Israeli public opposes it. (A Channel 10 poll found that 80% of the public opposes accepting refugees from Syria). Thus, even if we hoped that in the new year public discourse in Israel would be slightly less populist, and braver and more to the point, showing some leadership and presenting some alternatives, here came events of recent days in Jerusalem.