Israel looks to respond to stones with bullets 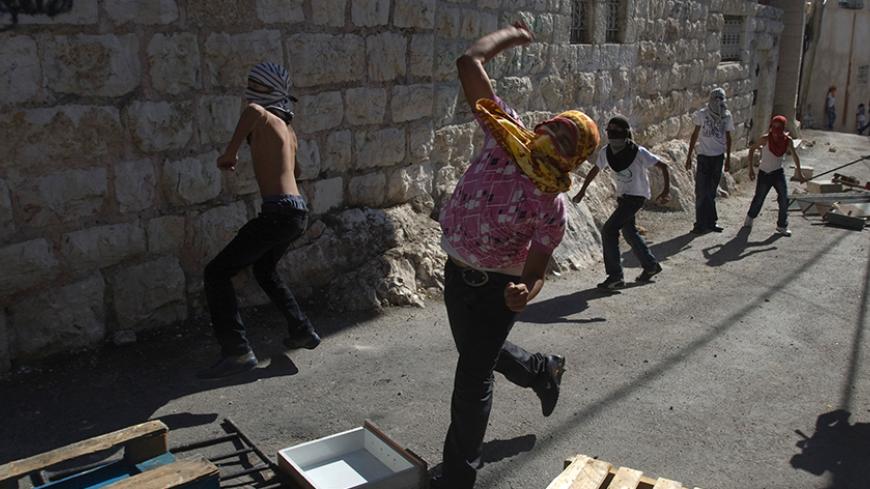 Just a few minutes after the diplomatic security Cabinet ended its meeting on the evening of Sept. 24, Prime Minister Benjamin Netanyahu stood before the news cameras. With a stern face, he presented the steps that his government would be taking in its “fight against those who throw rocks and firebombs and shoot fireworks,” noting that these steps had been approved unanimously at the meeting.

Legally, Netanyahu did not need to summon the Cabinet to approve the series of harsh measures that he had already agreed upon with Minister of Internal Security Gilad Erdan. He did, however, need to put on a show, if only for the sake of his image. The wave of terrorism raging in Jerusalem in recent weeks has severely damaged the capital residents' sense of personal security. Ever since the unrest began, it has figured prominently on the national agenda. The situation has gotten so serious that it threatens to undermine Netanyahu’s public standing as “Mr. Security.”

That is why Netanyahu wanted to face the media front on his own to tell them about the Cabinet’s decisions. Erdan may have helped put together the plan, but Netanyahu did not want him on stage beside him. It was important for Netanyahu to show that he himself was leading the campaign against the terror of rocks and Molotov cocktails.

The steps decided upon by the Cabinet include, first and foremost, amending existing open-fire orders and extending them to the police. The revised orders include permission to use sniper rifles (Ruger rifles) in certain situations. According to Netanyahu, “Until recently, police would open fire only when their own lives were in danger. As of now, they will be permitted to open fire — and they will know that they have the right to open fire — when they face danger to any lives.” What this really means is that police will now be allowed to open fire at minors, if they feel that lives are threatened.

Another decision was to impose a four-year minimum sentence on adults caught throwing rocks or Molotov cocktails (the maximum sentence is 20 years). It was also decided to take measures against minors and their parents. Punishments will include prison time, fines and the denial of pensions and benefits. The government will also examine the legality of imposing minimum fines on the parents of children ages 12-14.

These decisions were made despite reservations voiced by Attorney General Yehuda Weinstein. In discussions held last week, he argued that existing orders “are sufficient as is,” and stated that he opposes minimum sentencing laws. Netanyahu and Erdan responded that the current orders do not provide the tools necessary to prevent stone throwing. The final compromise was that the minimum sentences will be fixed via a three-year temporary emergency order, rather than legislation.

“We intend to change the norm that has become established here, that the State of Israel allows these deadly and murderous objects to be thrown without response and without being thwarted. This will change,” Netanyahu said, summing up his statement to the media. He got his message across. The government that he heads will take harsh measures against the throwing of rocks and Molotov cocktails. It is terrorism, it has already taken a toll on human life and it poses a threat to the personal safety of Jerusalem’s residents and visitors. Rocks and firecrackers often thrown by minors have turned life in certain Jerusalem neighborhoods into a veritable nightmare.

The question is whether the punitive and preventive measures decided upon by the Cabinet will really be effective in confronting this mass wave of terrorism by youth, spurred on by hopelessness, despair and incitement.

In the short term, Netanyahu will buy himself time to deal with the public, especially his voters on the right. Nevertheless, he is also taking a risk that his hard-handed policies will ignite this already volatile region. The day a 12-year-old Palestinian boy is killed by a sniper for throwing a rock will bring a tense debate over whether the police officer who fired the shot was really in a life-threatening situation — and matters might spin out of control.

The solution that Netanyahu proposes is inherently problematic. It deals with the symptom, by attempting to rein in a growing sense of rage among the masses. Netanyahu has no answers to this with the tools at his disposal, since his tool box does not include any promise of a diplomatic solution on the horizon, or even the illusion of one.

As the head of a right-wing government, Netanyahu, now in his fourth term, is not even trying to give the impression that he is engaged in negotiations with the Palestinians. This is actually his first term in office in which he is completely free of any obligation to engage in diplomatic negotiations due to pressures from some coalition partner. And so, he gets up before the public to announce heavy minimum sentencing, new orders for opening fire and the denial of pensions and benefits, without it even being clear if he will be able to get any of that past the Supreme Court.

Faced with a growing wave of terror, Netanyahu actually continues hiding his head in the sand. He imposes the procedures for opening fire used in the West Bank also to the Palestinian neighborhoods in East Jerusalem. What this really means is that Netanyahu is dividing the city by distinguishing between Jewish neighborhoods and Palestinian ones in East Jerusalem, at least when it comes to the procedures for opening fire.

Jewish residents on their part do not go near the Palestinian neighborhoods on the city’s periphery, since they would be putting their lives in danger. But they still aren’t safe, even in their own homes and yards, where rocks and Molotov cocktails are thrown at them as a matter of routine. Paradoxically, what the punitive, preventive measures taken by Netanyahu’s right-wing government underscore is how helpless that government really is. All these measures really prove that in many ways Jerusalem is no longer a united city.