Turkey’s recently announced cabinet is stacked with loyal allies of the president, making it clear that this is the "government of Erdogan." 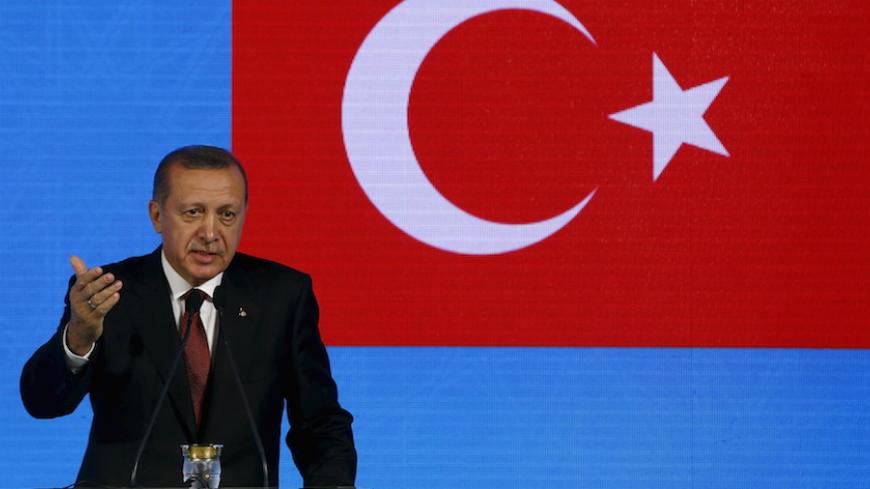 I was waiting for the announcement of the new Turkish Cabinet on Nov. 24 when a Russian fighter jet was shot down by a Turkish F-16 on the border between Turkey and Syria. The magnitude of the international crisis that the incident may generate is still too early to predict. Hearing an angry Russian President Vladimir Putin, who said Russia was “stabbed in the back by those who abetted the terrorists” and accused Turkey of aiding the Islamic State (IS) in transporting and selling its oil, and Foreign Minister Sergey Lavrov canceling his visit to Ankara and calling on Russians not to go to Turkey, it is not hard to predict the days ahead could hold very serious developments.

The announcement of the anxiously awaited new Turkish Cabinet revealed the identity of the government that has been much debated. Would it be the government of President Recep Tayyip Erdogan or a coalition between the president and Prime Minister Ahmet Davutoglu?

One of the 72 founding members of the ruling Justice and Development Party (AKP), who asked to remain unidentified, talked to Al-Monitor about the nature of the expected government a few hours before the announcement. The official, who was until he was sidelined recently a well-known figure within the AKP, speculated that the new government would reflect the power that Erdogan has with some minor concessions given to Davutoglu for face-saving purposes.

The announcement of the new government had in store surprises even for the most well-informed AKP veterans. The darling of the Western financial circles in terms of preserving trust in the Turkish economy, former Deputy Prime Minister Ali Babacan, who has been in charge of running the Turkish economy for over a decade and who Davutoglu has insisted on keeping his post, was excluded.

Former Finance Minister Mehmet Simsek replaced Babacan, as if to assuage the worries of international markets. Two names on the list leave no doubt that this new government will be ruled by Erdogan: Binali Yildirim and Erdogan’s son-in-law Berat Albayrak, who took key portfolios.

Yildirim, formerly Erdogan’s minister of transport, who is considered his de facto prime minister, assumed his former post. It is well known that Davutoglu had showed some resistance against having him in the government.

Yildirim's position requires close relations with the construction sector, which has been the main engine of the Turkish economy under Erdogan. Albayrak, who has been the CEO of Calik Holding, an energy company involved in energy deals with the Kurdistan Regional Government of Iraq, since 2007, gives Erdogan a strong hand in controlling the economic and finance policies of the new government in his position as minister of energy and natural resources.

The posts of the interior and justice ministries have also gone to staunch Erdogan loyalists: Efkan Ala and Bekir Bozdag.

The Foreign Ministry post has returned to the hands of the unimpressive Mevlut Cavusoglu.

However, with the downing of the Russian Su-24 by an air-to-air missile shot from a Turkish F-16, the new Cabinet announcement and analyses were overshadowed. Only time will tell how the events will unfold, but it is fairly safe to assume that the Nov. 24 incident will further deteriorate the relations of parties considered central to a possible solution of the Syrian conflict.

Deteriorating relations between Turkey and Russia may have a significant negative impact on the optimism generated during the Vienna talks.

Another victim of the latest development could be the positive expectations in the conflict between Turkey and the Syrian Kurds. Iran is delighted by Putin’s sensational visit to Tehran and his meeting with Supreme Leader Ayatollah Ali Khamenei a few days ago. And of course Russia would be overtly supporting the Kurdish People's Protection Units (YPG) fighters against IS with military cooperation from the United States in its offensive against Raqqa, the capital of IS in Syria.

The souring of relations between Ankara and Moscow might also cast a shadow on the cooperation between Turkey and the United States to evict IS from the 98-kilometer (61-mile) border that is still under the control of IS in northern Syria. Turkey enlisted the Americans by opening up its Incirlik Air Base in exchange for a tacit pledge to prevent YPG forces from moving "west of the Euphrates."

If Russia were to provide overt support to the YPG in its quest to remove IS from the border region, such a political move could further complicate not only US-Russian relations but also the cooperation between Washington and Ankara.

After all, Turkey is a member of NATO, but for Washington, under an Obama administration serving its last year in office and increasingly reluctant to engage in any sort of direct military involvement in Syria, it might be difficult to push “the unruly teenager of the Transatlantic Alliance” to invoke Article 5. Article 5, which describes the principle of collective defense and states that "an attack on one Ally shall be considered an attack on all Allies," has been invoked only once in NATO’s history — after the 9/11 attacks, when the United States was targeted by a relatively obscure nonstate actor, al-Qaeda.

Will NATO invoke Article 5 for Turkey, which might be threatened by a resurgent Russia, ostensibly seeking to fight against IS in the aftermath of the Paris attacks? It remains to be seen.