Turkey was a little too quick to identify the alleged perpetrator of the Ankara blast as a YPG-affiliated Syrian Kurd, and many observers mistrust the government's version of the story. 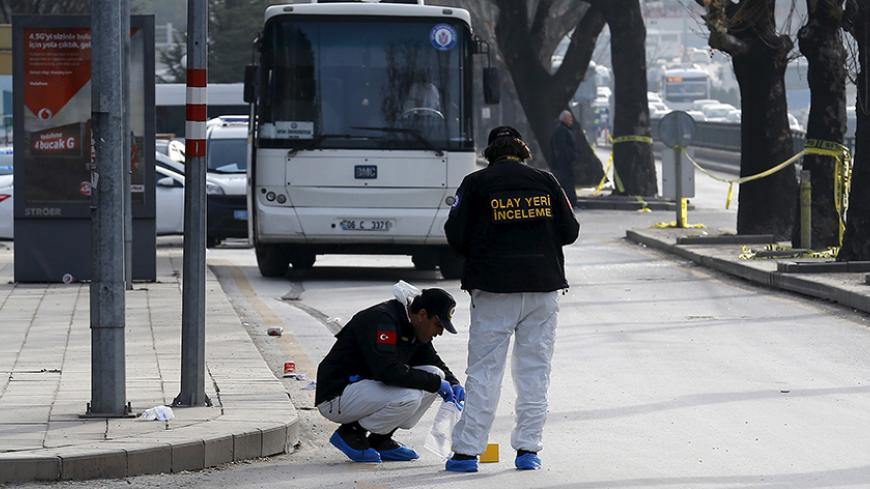 Forensic investigators examine a street near the site an explosion in Ankara, Turkey, Feb. 18, 2016. - REUTERS/Umit Bektas

It was not difficult to read the message behind the deadly Feb. 17 suicide bombing in Ankara: Terror can strike Turkey anywhere, at any time.

The blast shook the heart of Ankara during rush hour, killing 28 people and injuring 61, some badly. Five shuttle buses carrying military personnel were hit by an explosives-laden vehicle as the convoy stopped at a traffic light. Twenty-seven of the victims have been identified as military personnel. While this was not the deadliest terrorist attack in Turkey’s history, it was without a doubt the most spectacular, as the blast occurred only a few hundred yards from the military headquarters, parliament and other government offices.

The attack is likely backlash from the violence in Syria, which has contributed to clashes between Kurdish militants and Turkish security forces in southeastern Turkey. It is also an outcome of Turkey’s policies regarding Russia, the United States and the United Nations — and above all, toward the Syrian Kurdish Democratic Union Party (PYD) and its armed wing, the People's Protection Units (YPG).

Most recently, Syrian Kurds with Russian air support have made significant advances north of Aleppo, changing the power balance in Syria against Turkey. The YPG has also raised the hackles of the Turkish government by capturing the strategic Menagh air base from opposition elements, triggering intense Turkish shelling of the Syrian town of Azaz.

Turkey’s shelling of YPG targets was so effective that the UN Security Council felt obliged to express concern about Turkey’s actions. Also, the US State Department, France and European Union foreign affairs chief Federica Mogherini have all called on Turkey to stop.

Turkish Prime Minister Ahmet Davutoglu was startlingly quick to blame the YPG. Less than half a day after the blast, Davutoglu announced the alleged assailant's name as Saleh Najjar, a Syrian Kurd and alleged YPG member who had been in Turkey since July 2014, when he entered as a refugee.

The revelation was somewhat bizarre. Turkey’s security establishment, while unable to prevent the massive terrorist attack, was able to identify the suspect with stunning speed.

Some intelligence sources in Ankara believe the bombing could be an act by Syrian military intelligence, perhaps backed by Russia. After all, the explosion took place very close to the air force command, which could be taken as a message of retribution for Turkey's Nov. 24 downing of a Russian fighter jet.

The rhetoric Davutoglu used while announcing the identity of the alleged bomber and blaming the YPG without question gave the impression that the Turkish government was trying to use the terrorist attack to legitimize its actions against the PYD/YPG in Syria.

On the morning of the blast, Turkish President Recep Tayyip Erdogan of the Justice and Development Party (AKP) again lashed out at the US administration, calling on it to decide who its ally is in this conflict, Turkey or the “terrorist” PYD/YPG.

Immediately after blaming the YPG for the attack, Davutoglu said, “After this, we hope our allies will see the YPG as the extension of the terrorist organization PKK. ... Those who see an organization that is the enemy of Turkey as friendly will lose Turkey’s friendship."

It took less than an hour for PYD leader Salih Muslim to reject Davutoglu’s claims. Muslim told international news agencies that his organization has no member by that name.

The YPG also denied the allegation, issuing a communiqué the same day. The group reiterated that it has never engaged in any military operation in any neighboring country or against anyone except terrorist groups that have attacked it, referring to IS and Jabhat al-Nusra, al-Qaeda’s affiliate in Syria. The YPG also accused the Turkish authorities of distorting the facts.

These objections did not seem to impress Erdogan. According to him, everything was crystal clear: The YPG was behind the attack.

Erdogan's persistent rhetoric aims to pressure the United States to make a clear choice between Ankara and Washington's Syrian Kurdish allies. Yet, much to Ankara’s annoyance, Washington did not cave.

All this controversy fueled talk of conspiracy among Turkey’s Islamists. Passionate backers of Erdogan and people close to Davutoglu increasingly believe that the Islamist political power in Turkey faces an international struggle in which the United States and the West stand with Russia. They see the Syrian and Turkish Kurdish insurgency as evidence of a conspiracy. According to this mindset, to foil this plot, Turkey should militarily intervene in Syria and draw a line of defense around Aleppo.

One of the most prominent advocates of this train of thought is Ibrahim Karagul, editor-in-chief of the pro-AKP Yeni Safak. On the day of the Ankara explosion, his column was headlined, “Let us be frank, we are already at war.”

“If we do not confront the war in Aleppo, if we prefer to meet the aggression coming from Kobani at Cizre … tomorrow the war will be waged hundreds of kilometers inside Turkey,” Karagul wrote. “Thus, Turkey should repel the threats emanating from the PKK/PYD — which has been transformed into an instrument of direct intervention and is no longer related to any sort of ethnic identity — back into Syria itself and prevent that frontier from becoming a front line. It should give priority to those moves in the territories of Syria that would eradicate the threats from there.”

Erdogan’s son-in-law, Energy Minister Berat Albayrak, said the war is not only a “defensive" one waged by Turkey’s Islamist power-holders against the alleged international conspiracy. This fight also has a missionary connotation on behalf of all Muslims — on behalf of the "ummah," or community.

“Today, Turkey is waging an existential war, a war for the future. And this war is not only for this country and this region; it is a war for the independence of the ummah,” Albayrak said in a recent speech in Trabzon province.

Given the mindset of Turkey's ideologically committed neophytes in power, it might not be surprising that a formidable NATO ally in that part of the world has become a free zone for terrorism that is striking not only the hearts of Turkey’s cities, but also the souls of its citizens.