Following his failure in Aleppo, President Recep Tayyip Erdogan’s eagerness for a military intervention in Syria is stronger than ever, but will the Turkish military acquiesce to his plans? 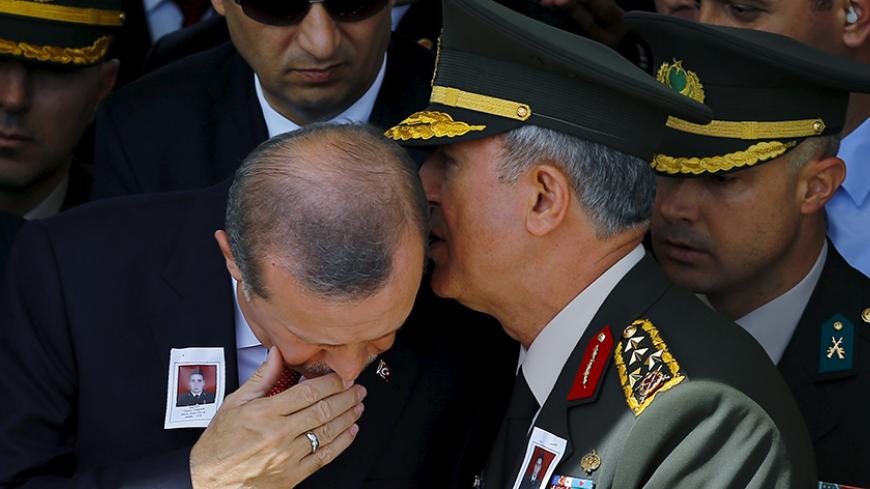 Turkey's Chief of Staff Gen. Hulusi Akar whispers in President Recep Tayyip Erdogan's ear during the funeral of Sgt. Okan Tasan, one of the soldiers killed during an attack on a military convoy and clashes in the mountainous Daglica area of Hakkari province, at Kocatepe Mosque in Ankara, Sept. 10, 2015. - REUTERS/Umit Bektas

On Feb. 3, the Syrian army and its allies dealt a strategic blow to Ankara when they cut the land route between Aleppo and the Bab al-Salameh border crossing with Turkey in the Turkish province of Kilis. Keeping this route to Aleppo open had been of vital importance for President Recep Tayyip Erdogan and Prime Minister Ahmet Davutoglu who, keen to topple the Damascus regime since 2011, have used every means at their disposal short of sending troops to Syria.

The route was crucial to Turkey for two related reasons. First, the fighters, weapons, munitions and various supplies that flowed via this route to Aleppo allowed the rebels to sustain their military presence in Syria’s most populous city and therefore preserve their political ambitions in the conflict. With the route now cut, the Syrian regime’s expected siege of Aleppo means the opposition forces' likely defeat.

Second, the ground the opposition holds on the battlefield and in any political solution process — thanks to its presence in Aleppo — would have given Ankara a foothold in Syria despite its aspiration of toppling the regime. Thus, with the fall of Aleppo, Ankara would find itself largely sidelined from the Syrian process.

So, the question now is: What will Erdogan do to preserve his foothold in Syria after his strategic loss in Aleppo? Will he concede defeat or will he use his means of last resort — in other words, will he send Turkish troops to Syria?

Speaking at a press conference during a visit to Senegal the following day, Erdogan said, “This attitude on the part of Russia is something I greet with a smile. Russia should first answer for the people it kills on Syrian territory.”

Bashing Russia on moral grounds, Erdogan’s statement neither denied nor confirmed the alleged preparations for an invasion. No confirmation was expected anyway, but a categorical denial had been possible. Instead, Erdogan expressed — in indirect but clear enough language, his desire to send Turkish forces to Syria, stressing that the "mistake" of 2003 should not be repeated. He was referring to the Turkish parliament’s rejection of a government motion that would have authorized the US military’s use of Turkish territory to invade Iraq and also the deployment of Turkish troops in northern Iraq.

“We don’t want to repeat the Iraq mistake in Syria,” Erdogan said. “The situation in Iraq would have been different [today] if … Turkey had been present in Iraq. Turkey would have been at the table if the motion had been approved. Being forward-looking is very important.” Referring to the Russian intervention in Syria and the regime’s ensuing gains, he added, “Things in Syria can go on like this only for a certain period of time, but not after a certain point. Turkey has to protect its sensitivities.”

By implying that a military intervention is the only way left for him to have a say on Syria’s future, Erdogan is in fact conceding that his Syria policy has failed. The true meaning of his words is that Turkey will have no place at the Syrian negotiating table unless it sends ground forces to Syria in a war of unpredictable length and consequences.

Since the Turkish military cannot go to Syria to take Aleppo from the regime and hand it over to the jihadis, legitimate grounds for a unilateral intervention could be based on the pretext of battling the Islamic State (IS). In that case, the Syrian territory up for invasion is the IS-controlled border area stretching over some 90 kilometers (56 miles) from Jarablus west to the Harjalah-Marea line. One could safely assume that some adjacent territories deeper into Syria would also be occupied to secure control of the area.

It’s obvious, however, that the real target of such an intervention would be not IS, but the Syrian Kurds’ Democratic Union Party (PYD) and its armed wing, the People’s Protection Units (YPG), which Ankara sees as an offshoot of the Kurdistan Workers Party (PKK) and therefore as a threat. Judging by its attitude so far, the United States will almost certainly oppose any Turkish action that turns into an operation targeting the YPG, which it sees as its most reliable local ally against IS.

Erdogan is now calling on the United States to choose between Turkey and the PYD/YPG, which he brands as terrorists. These calls, however, make no sense in the Syrian context because the Turkish military, as a foreign force, cannot serve as an alternative to the PYD, the primary local force in the battle against IS. Going along with Turkey, on the other hand, would amount to tacit approval of a lasting invasion that also affects the Kurdish regions. Hence, a Turkish invasion is bound to drive a wedge between Ankara and its Western allies, who would object to such a move.

Furthermore, the direct and indirect responses the Turkish troops would face from the Kurds, the Damascus regime, Russia, Iran and even IS are very likely to go far beyond “objections” and would be of a military nature. Ankara might eventually find itself fighting more than one enemy at the same time. Turkey’s NATO membership cannot serve as deterrence in this war because Syria is not part of the Western alliance’s defense zone. NATO’s activation of Articles 4 and 5 on collective defense is out of the question for any Turkish troops that come under attack in Syria.

So, all this boils down to whether the Turkish Armed Forces (TSK) will put up enough resistance to Erdogan’s intention to drag Turkey into the war. The ultimate answer remains to be seen, but all indications so far suggest the army has been reluctant to participate in a military intervention since the Syrian conflict began. The latest reports indicate the military leadership is standing its ground. A front-page story Feb. 10 in Hurriyet conveyed the military’s hesitance about an intervention, referring to a “senior official” who was discernible as a military officer.

“The General Staff has two important decisions concerning a military deployment by the international community in Syria. First, the United States is aware it cannot pass a [UN] resolution because of Russia’s attitude, and therefore it is not making any preparations to that effect. Second, the TSK is not going to set foot in Syria without a UN Security Council resolution,” the report read.

Over the years, Erdogan has proved to be a leader who occasionally steps back but tends to never compromise, always playing a zero-sum game. In response to any loss of power, he reflexively resorts to using power again. His sense of grandeur and the cult of personality he has built around himself have only reinforced this political persona.

Having cornered himself in Syria, Erdogan again wants to use force to break free. And the only force he has at his disposal is the TSK, which seems reluctant to be exploited for that purpose. In short, the resistance the TSK puts up to Erdogan is the only mainstay that Turkey presently has to avoid an adventure doomed to drag it into a catastrophe.