Will he, won't he? Turks ponder whether Erdogan will invade Syria

The unhappy Turkish president has many factors to consider if he is contemplating military intervention in Syria. 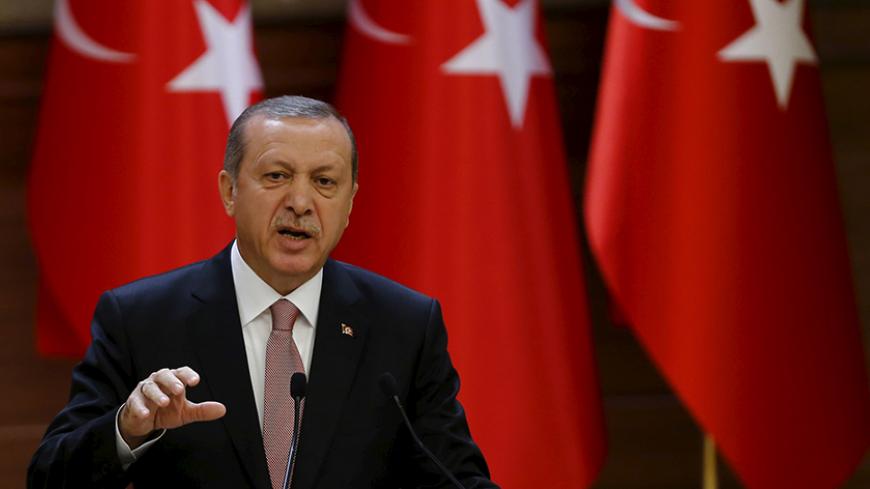 Turkish President Recep Tayyip Erdogan makes a speech during his meeting with mukhtars at the Presidential Palace in Ankara, Nov. 26, 2015. - REUTERS/Umit Bektas

Nowadays, when two or more Turks come together, the conversation inevitably moves into questioning the motives of President Recep Tayyip Erdogan and his plans for Turkey's role in the ever-worsening situation in Syria. The question is: Is he going to push the army into Syrian territory?

Turkey's link with the Syrian rebels has been severely weakened by the seeming collapse of the Geneva III talks and the advances of Syrian regime forces from the north to Aleppo with the support of Russian air power. Dramatic developments are taking place in the Azaz-Jarablus corridor, which served as a lifeline for Syrian rebels backed by Turkey, Saudi Arabia and Qatar, and also, more or less, for those endorsed by the United States. The fighting there is not only depriving Turkey of its most important leverage in Syria, but also triggering a massive exodus of Syrians to Turkey. Turkey, already strained due to some 2.5 million refugees, is now faced with tens of thousands of potential newcomers.

Moreover, as this strategically vital corridor for Turkey is depopulated because of the intense Russian airstrikes, the Kurdish People’s Protection Units (YPG) is moving into the region. As a result of this, Kurds can connect the Kurdish cantons stretching from Syria’s eastern frontier with Iraq and its western frontier with Turkey. Ankara has repeatedly declared any YPG move to the west of the Euphrates River as a red line violation, and Erdogan has said that Turkey is determined to act against such violations.

Yet that “red line” has been breached and perhaps effectively erased, as was the case with previous Turkish lines drawn to obstruct Kurdish ambitions in the region.

There are sufficient reasons for Erdogan to send Turkish ground troops into Syria, particularly to Aleppo, through which Ankara can hold some ground around the Azaz-Jarablus corridor. Also, this could be some kind of test, both of Russia’s commitment to the Syrian regime and NATO’s determination to support its ally.

Last weekend, Erdogan lashed out at several parties, including the United States and Russia, as he returned to Turkey from a controversial trip to a number of Latin American countries. It has become routine for him to make his most important policy speeches and threats on board the presidential jet, addressing the journalists he handpicks to accompany him.

In an interesting move, he signaled his intent to take the initiative in Syria. Recalling the pre-Iraq invasion days, Erdogan said he does not want to “commit the mistake in Syria that had been committed in Iraq.” He was apparently referring to the decree allowing Turkish troops into Iraqi Kurdistan along with the Americans — a decree that had not been approved by the Turkish parliament.

If Turkey had not missed its opportunity to send troops into Iraqi territory then, in 2003, the situation in Iraq today would be much different, according to Erdogan.

“Now, in Syria, the way things are developing, they cannot go beyond a certain limit. We have to act according to our [security] sensitivities. Our airspace is also NATO’s airspace. They [NATO] should also take the necessary steps. All this is a test for everybody.”

However, with any kind of direct Turkish involvement in Syria, there is a danger of confrontation with Russia. The danger is even more likely since the relations between the countries deteriorated following Turkey's downing of a Russian fighter jet Nov. 24.

Also on his return trip, Erdogan responded to Russia’s allegations that Turkish armed forces were preparing for an intervention in Syria: “Russia should be asked: What is your preoccupation with Syria? At the moment, you are like an invader. You are the one cooperating with the murderer of 400,000 people. … Turkey's [566-mile-long frontier with Syria] is under threat. Definitely, Turkey will take precautions. They are only precautions, while Russia is on the offensive. Russia has no right to make allegations on these issues. Moreover, we have compatriots in Syria. Oh Russia, do you have a common frontier here with Syria? Do you have compatriots?”

Washington was not immune to his wrath either. It was apparent that he was angered by America's gestures to its Kurdish ally in Syria, the YPG, which he considers a terrorist organization along with the Kurdistan Workers Party (PKK) and the US-supported, Kurdish nationalist Democratic Union Party (PYD).

“The PYD, YPG are terrorist organizations. What the PKK is, the PYD is exactly the same. We will take this position to all the international bodies," Erdogan said.

He criticized Brett McGurk, US President Barack Obama's special representative to the Global Coalition to Counter ISIL (Islamic State), for visiting Kobani, Syria, after Turkey refused to go along with having the PYD participate in the Geneva III talks.

“The PYD was not able to come to Geneva, so [McGurk] goes to Kobani and receives a commemorative plaque from a so-called general there," Erdogan said. The Turkish president asked the United States, "How can we trust you? Who is your partner — the terrorists in Kobani or me?”

The brief and very clear response came Feb. 8 from US State Department spokesman John Kirby. Washington understands Turkey’s concerns about the YPG, Kirby told reporters in his daily briefing, but the YPG is one of the most successful forces in the fight against IS.

“We do not see them as a terrorist organization and will continue supporting them,” he said.

This was one of the most powerful rebuffs American authorities have ever unleashed at a Turkish president.

If Russian air power and the YPG’s presence on the ground don't deter Erdogan from sending Turkish troops into Syria, perhaps the remarks of the US State Department spokesman will.

Or perhaps those words will drive Erdogan to act more decisively about a possible military intervention in Syria in order to break the military link between the United States and the Syrian Kurds, as this has become the most fearsome development in the eyes of Turkey’s military establishment, which is phobic about Kurds.

So speculation about a possible Turkish military intervention in Syria is likely to grow louder and more intense among Turkey's citizens in the days to come.