Has Turkey’s regional power grab come to an end?

Turkey is forfeiting its claims for regional supremacy by joining the Saudi-led Sunni alliance and making friendly overtures toward Israel. 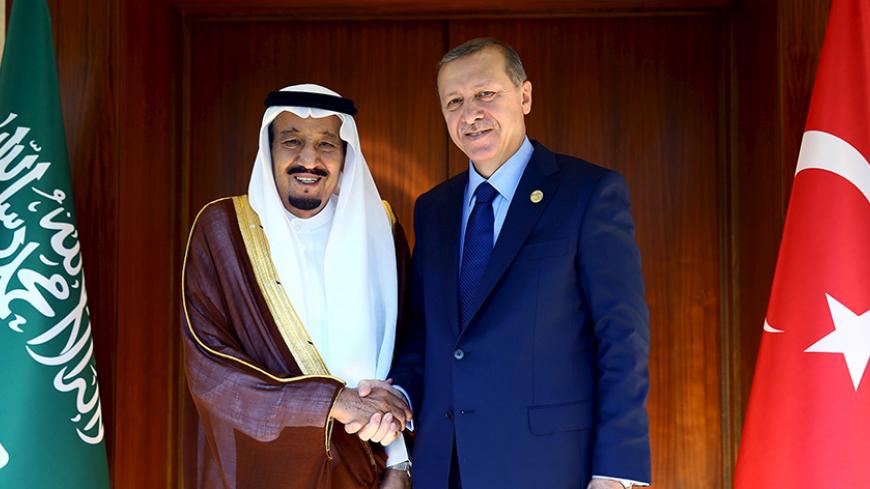 Turkey’s fervent aspiration for regional power in the Middle East is over after it made itself a party to the raging sectarian conflict rather than providing a meaningful contribution to a possible solution to the Syrian imbroglio.

If there were any doubts, the ruling Justice and Development Party's latest desperate moves to escape its increasingly international isolation should remove them: In mid-December, Ankara plunged into the Saudi-led 34-nation military alliance of Sunni nations. Parallel to this ill-conceived decision, Turkey's rapprochement with Israel is said to be underway.

The Saudi-led alliance, which even Pakistan and Malaysia have declared they were not joining, is justifiably seen by many analysts as a Sunni coalition through which Saudi Arabia aims to check and reduce Iran’s regional influence. By agreeing to be among the likes of Comoros, Mali and Niger and led by Saudi Arabia, Turkey forfeited its claim to being the historical Sunni counterweight to Iran, going back to the 16th-century rivalry between the Ottoman Empire and the Safavids. That is not a role suited to a country with an imperial legacy whose glory is revisited frequently by the current power holders in Turkey.

President Recep Tayyip Erdogan's rule had already made Turkey a part of a subregional axis competing with Saudi influence over the Sunni world.

Since January 2015, with the change of leadership in Saudi Arabia, the Sunni configuration of power in the region has changed. Since then, Erdogan has visited the kingdom three times and announced his support for the Saudi military campaign in Yemen. By the end of the year, the two countries decided to establish a “strategic cooperation council.”

Saudi Arabia and Qatar have cash and hydrocarbons; Turkey has military muscle. It looks as if the Gulf monarchies are allowing Turkey to benefit from their treasuries while making use of Turkey’s geopolitical weight. The Saudis seem emboldened by having Turkish muscle on board in their confrontational attitude toward Tehran.

The other undeclared forfeiture of Turkey’s claim to regional leadership came in its last overtures with Israel for reconciliation. Erdogan, on his way back from Saudi Arabia Jan. 2, told the journalist accompanying him, “Turkey and Israel need each other.”

A statement so worded may sound like Erdogan’s assessment of the changing geopolitics of the Middle East and reflect Turkey’s stepping back from contesting Israel’s posturing in the region.

It should never be forgotten that the real cause of the ever-deteriorating relationship with Israel since January 2009, in the wake of Israel’s Gaza war, had its roots in who would be calling the shots as the regional power. The Mavi Marmara incident in May 2010 that took the lives of nine Turkish nationals who were killed by Israeli commandos had been the symbolic turning point for the power struggle in the eastern Mediterranean.

Turkey, after following the Saudi lead against Iran and trying to soften its relationship with Israel, the most anti-Iran power center in the region, is not only forfeiting its claims for regional power status but also taking part in the anti-Iran regional coalition in a way that has never been done before.

For Ankara, all these latest moves are no doubt the natural consequences of its ever-weakening position in Syria in the wake of the crisis with Russia after the downing of a Russian fighter jet on Nov. 24. Moreover, a broader coalition connecting Turkey to Saudi Arabia and also with Israel is thought to have a favorable impact on Washington, its most powerful ally and one with which it has had uneasy relations over Syria.

The visit of Gen. Joseph Dunford — the new chairman of the US Joint Chiefs of Staff — to Turkey exposed the main source of uneasiness: the US connection to the Syrian Kurds.

The visit followed the breaching of Turkey’s most outspoken “red line” in Syria: the Kurdish Democratic Union Party (PYD) crossing the Euphrates.

With US support and coordination, the Syrian Kurdish armed forces, the People's Protection Units, are fighting the Islamic State (IS) — and if it moves to the west of the Euphrates, in the Azaz-Jarablus corridor as well. This area is mainly controlled by Syrian groups that Turkey supports and constitutes the main link between Turkey and besieged Aleppo that would end up in linking Rojava (the Syrian Kurdish areas) as a single geographic entity under PYD rule from the Iraqi border all the way to the west, covering hundreds of miles of Turkey's border with Syria.

This has been the main issue raised to Dunford in his talks in Ankara. The Turkish military has shared its concerns with the US military leader over Syrian Kurdish groups’ attempts to create a “Kurdish corridor” in northern Syria and change the demographic structure of the region to the advantage of the Kurds.

These messages were delivered to Dunford, who held talks with Turkish Chief of General Staff Gen. Hulusi Akar and Prime Minister Ahmet Davutoglu on Jan. 6.

“We are aware of their desires and attempts to establish a Kurdish corridor along the Turkish border by entering the Azaz-Jarablus line. We have declared so many times that Turkey will never accept this,” a security source told Al-Monitor on condition of anonymity.

The Syrian Democratic Forces, a coalition composed of Kurds, Turkmens, Christians and Arabs, succeeded in seizing control of the strategically important Teshrin Dam on the Euphrates River, but Ankara has complained that 85% of that coalition consists of PYD members.

The Syrian Democratic Forces, essentially a Kurdish force, succeeded in seizing the Teshrin Dam on Dec. 26 and moved to the vicinity of the town of Manbij only 12 kilometers (some 7 miles) away. If Manbij falls, IS fighters in the Aleppo area could be left without land access to their capital in Raqqa.

Although that town is out of Turkish artillery range, Ankara could hit the PYD forces there with other weapons. But doing so might be politically difficult at a time when the Kurds are fighting IS on the southern frontier. Short of a cease-fire with Ankara, Turkey will likely act to undermine any Kurdish gains in Syria.

Meanwhile, the PYD offensive has been supported by coalition airstrikes, indicating that the move was at least partly coordinated with the United States and was not a unilateral PYD decision.

This begs the question: What would Washington’s position vis-a-vis Ankara be under these circumstances, particularly after Dunford’s visit, considering the contradictions that threaten to rip apart the US’ Syrian alliance network?

For the foremost American expert on Syria, Joshua Landis, “Resolving them is probably impossible; ignoring or transcending them won’t be much easier … because the Kurds have offered something that actually works on the ground, because Erdogan has been such a singularly unhelpful ally in Syria. … Unless Turkey’s behavior changes radically and other current trends continue, the unlikely alliance between the Pentagon and the [Kurdistan Workers Party] looks like it might just defy the odds and survive for the long term.”

Difficult times lie ahead for all those involved in the Syrian conflict and especially for Turkey and its internationally weakening strongman, Erdogan.