Is it time for Israel to revisit its relationship with Sunni bloc?

With Iran fighting against IS forces, and in view of IS’ latest terrorism attacks in Egypt, Lebanon and France, the Israeli security establishment is questioning its regional security doctrine. 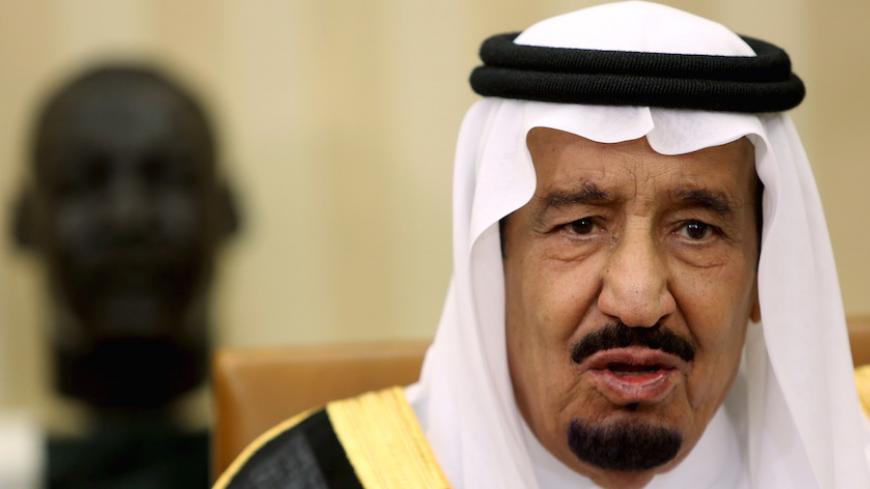 Saudi King Salman bin Abdul-Aziz Al Saud delivers his remarks to US President Barack Obama (not pictured) in the Oval Office of the White House in Washington, Sept. 4, 2015. - REUTERS/Gary Cameron

Hezbollah Secretary-General Hassan Nasrallah gave yet another of his regular speeches on Nov. 14. This time, however, the timing was especially dramatic. It was just two days after the Islamic State’s (IS) deadly suicide attack in the Dahiyeh Quarter, a Hezbollah stronghold in Beirut, and just a few hours after IS’ killing spree in Paris. After watching a live broadcast of the speech, a senior Israeli intelligence official made a remarkable comment, speaking on condition of anonymity: “[Nasrallah] sounds like he just joined [Israeli nongovernmental organization] Peace Now. How could we possibly have reached a point in which Nasrallah has become the responsible adult in the Middle East?”

This question is heard more and more in the corridors of Israel’s defense establishment. Nasrallah’s speech lasted several minutes, but this time it did not include attacks on Israel (even though Israel was mentioned more than once as the source of all troubles in the region). In contrast, it contained numerous attacks on IS. Nasrallah employed the same jargon used by the West to describe IS’ atrocities.

“The Islamic State’s attacks in Paris were intended to intimidate,” he said. “People of the region, of the Arab and Islamic countries, who are living under the brutality of [IS], including Lebanon which suffered a few days ago from it, are the most aware of and sympathetic to what hit the French nation last night. We offer our deep condolences, solidarity, sympathy [and] our moral and humanitarian stand to those innocents who are invaded by the barbaric criminal management of [IS].”

Referring to the car bomb in Dahiyeh, Nasrallah said, “We must find the people responsible for these car bombs and destroy those networks. … The Islamic State has a system. This system was implemented in Paris. They use cars and trucks because they want as many casualties and as much destruction as possible. They also want to sow fear, so they use suicide bombers. We must fight against this new wave of attacks by employing the same strategy that we used against the car bombs. We must get to the people in charge of these networks, the leadership that sends these suicide bombers. … I want to tell everyone who is following events in Lebanon and the region that the Islamic State has no future. The Islamic State has a short life ahead of it. It is a project of death and destruction. They have no plans for a state or life or recognition of the other. Their very thoughts are saturated with elements of self-destruction. The Islamic State has no future. Anyone who once supported the Islamic State is beginning to see how vicious they really are. There is no room for the Islamic State in any political arrangement anywhere, not in Iraq or Syria, not in Libya or Yemen. There is no room for anyone who bears the name of the Islamic State.”

Almost all world leaders whose countries have been horrified by IS’ atrocities could sign on to Nasrallah’s remarks. “It proves that everything in life is relative,” said a senior Israeli defense official to Al-Monitor, speaking on condition of anonymity. “Compared to what we are seeing now, Nasrallah is practically a ‘righteous gentile’ [term describing non-Jews who saved Jews during the Holocaust]. I almost forgot,” he went on to admit, “that Hezbollah basically invented the car bomb and suicide bombers.” The Israeli defense official was referring to the car bomb attack on the headquarters of the Multinational Force in Beirut in 1983, which left 305 people dead, including 241 US Marines, and the car bomb that exploded beside the gate of the Israel Defense Forces command in Tyre, which killed 28 Israeli soldiers and border police and 31 Lebanese prisoners, etc.

In Israel, it is often said that recent developments on the international terrorism front prove that everything is relative. Given IS, people already miss al-Qaeda. When all of this is taken into consideration, the Shiite axis, based in Iran and including Damascus and Beirut, has for quite a while now not represented the problem, but the solution. Israel is well aware that the Europeans and Americans have long reached this conclusion. The nuclear deal with Iran confirmed that it is a major power. According to political sources in Israel, the deal effectively gave Iran a “license to kill.” Recent events create a situation in which this license actually offers a glimmer of hope to the free world. As of now, at least, the only ground forces fighting IS are made up of the Shiite axis: Iran, Hezbollah and what is left of the Syrian army, in collaboration with the Kurds.

This brings us back to the old argument about the war between Sunni and Shiite Islam echoing through the corridors of the Israeli security establishment. Which is better, the Sunnis or the Shiites? That’s what people are asking in Israel.

The official position sides with the Sunnis, at least for now. Israel has been maintaining clandestine and intelligence collaborations with the pragmatic Sunni states, headed by Saudi Arabia, the Gulf states, Egypt and Jordan. It has no reason to give up on them. After all, Israel also regards Iran’s domination of the region and the growing strength of the Tehran-Beirut axis as a significant existential threat.

A few weeks ago, I spoke with a high-ranking Israeli defense official who explained in great detail why Israel prefers this particular alignment. He also provided a lengthy account of the strategic dangers posed by the Shiite axis. He saw renewed Russian involvement in the region as a very serious problem, noting that it could indicate the beginning of a Shiite victory, resulting in its domination of the strategic space. According to that same source, Israel prefers the Sunni chaos.

IS’ recent outrages, culminating in the striking series of attacks over the last few days (the Russian airliner that was downed over the Sinai Peninsula, the Dahiyeh bombing in Beirut and the Paris attack) dangles a question mark over these assumptions. There is also a minority opinion in Israel, which is getting stronger given current developments.

As I was told by one proponent of the minority position on condition of anonymity, “Imagine that the Islamic State manages to get its hand on a nuclear bomb, even the kind of primitive device that we call a dirty bomb. Does anyone doubt that they would use it? You can’t say that about the Shiites. Regardless of what we say about Iran, and rightfully so at that, the ayatollahs have no deep desire or joy for suicide and murder. They think systematically and logically. They have a rationale, which is familiar to us. The Sunni demon now emerging from its bottle is capable of anything. It has no red lines whatsoever. This should not only terrify us here in Israel. It should terrify the entire world.”

For now, however, IS’ terrorist achievements do not match its operational failures in the field. It lost assets to the Kurds in northern Iraq, and it is suffering blow after blow in Syria. The ideal of an IS caliphate, which has distinguished the movement from al-Qaeda and turned it into the current threat, is now at risk.

In a radio interview on Nov. 15, Shabtai Shavit, the former head of Israel’s Mossad, said that IS should be ravaged like Dresden during World War II. It should be annihilated, even if it costs numerous lives. Shavit got carried away, of course, but his statement reflects the way some defense officials regard IS. They see it as a different kind of threat: unpredictable, illogical and inhuman. It is not the kind of threat over which we can debate whether to destroy it or engage it in dialogue. It must be uprooted, plain and simple.