As Oman practices diplomacy in the Middle East, it also is strengthening ties with China as a potential long-term partner. 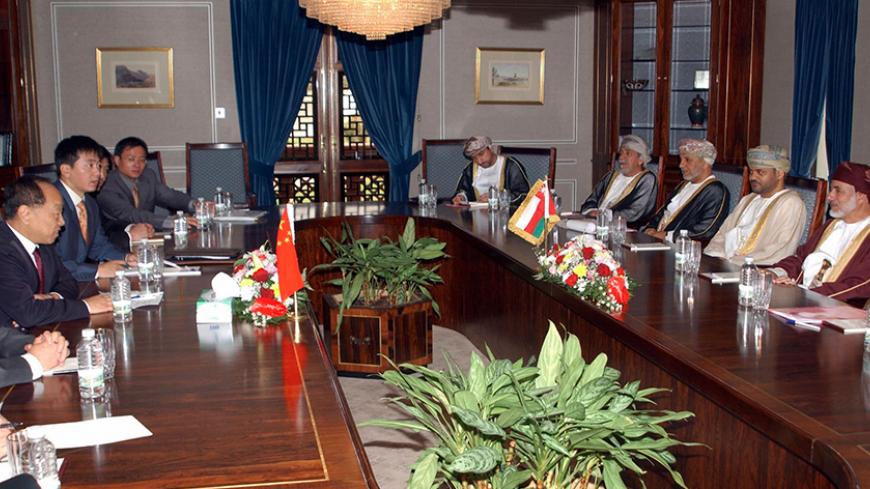 Oman’s foreign policy has recently been the center of considerable analysis. As a country that harbors no hostility toward any government in the world and as the organizer and host of diplomatic talks between global adversaries, Oman has been called the Switzerland of the Middle East. As the Gulf Cooperation Council (GCC) member on the best terms with Iran, Muscat has for decades served as a diplomatic bridge between the Islamic Republic and the Gulf Arab states and their Western allies.

Indeed, Muscat’s diplomatic maneuvers have recently shaped world history. In July 2012, Oman hosted secret talks between US and Iranian officials, which culminated in the landmark Iran nuclear deal signed earlier this year in Austria. Most recently, Oman’s flurry of diplomatic activities aimed at peacefully resolving the crises in Syria and Yemen have also made headlines in the international press.

While Oman continues to play its unique diplomatic cards in the region, the sultanate is also following other GCC states in shifting attention east toward China. Since Oman and China established official diplomatic relations in 1978, China’s thirst for oil has been the most influential factor shaping Sino-Omani relations. In recent years, however, Muscat and Beijing’s relationship has expanded into non-oil sectors, paving the way for the two nations to form a stronger long-term partnership.

Ties between the two countries date back to pre-Islamic history. Oman sent trade missions to China as early as the fourth century. By the eighth century, the Omanis reportedly introduced eastern China to Islam, according to former US Ambassador to Oman Gary Grappo.

In 1983, Oman became the first Arab country to export its oil to China. Beijing recognized the sultanate as a potentially important player in China’s quest to secure Middle Eastern energy supplies. Over the years, China’s consumption of Oman’s oil has become crucial for both nations’ economies. China is Oman’s top export partner, last year accounting for 43% of the nation's exports (the United Arab Emirates and South Korea ranked second and third at 10% and 8%, respectively), and Oman is China’s fourth-largest trading partner in the Middle East and North Africa region.

Although oil continues to dominate Sino-Omani trade, the nature of their bilateral relations has expanded. Since 2005, both governments have held annual strategic consultations to address piracy in the Gulf of Aden and other international security threats. In 2010, Muscat and Beijing launched the Oman-China Friendship Association to strengthen ties in economic, social, cultural and scientific sectors.

According to Muhammad Zulfikar Rakhmat, an expert on Sino-GCC relations, Omani and Chinese firms have signed construction deals for a power plant as well as for infrastructure projects, including a port and facilities for shipbuilding and water management. There are more than 40 Chinese companies doing business in Oman. Rakhmat also notes that Oman and China’s growing ties have taken on a cultural and humanitarian nature. For example, in 2007, Muscat and Beijing agreed to establish the chair of Arabic studies at China’s Peking University, and more than 3 million Chinese visited Oman’s pavilion at the 2010 Shanghai Expo. Furthermore, Oman responded to the Sichuan earthquake of 2008 by providing the country with 350 residential housing units, along with medical and education facilities.

It appears Muscat also is leveraging its deepening relationship with China to spread Omani influence in east Africa. Last month, construction began on a $10 billion port in Bagamoyo, Tanzania (about 50 miles north of Dar es Salaam), a special economic zone in the east African nation. The port is a joint project among China Merchants Holdings International Co. Ltd., a Hong Kong-based conglomerate; Oman’s State General Reserve Fund, a sovereign wealth fund in Oman; and the government of Tanzania. Tanzanian President Jakaya Kikwete welcomed the project, hailing it as a means to achieve an “industrial revolution in Tanzania.”

Oman’s free-trade zones offer China a politically stable entry point into the Arab and African worlds to sell cheap consumer goods and make investments. In turn, a strong relationship with China gives Muscat the means to gain greater autonomy from the West. The political risks of appearing too closely aligned with the United States and United Kingdom are mitigated by strengthening relations with China. (The same can be said of Oman’s growing relationship with Iran.) After the United States launched wars in Afghanistan in 2001 and Iraq in 2003, Omani police forcefully quelled demonstrators protesting US foreign policy. According to experts, these demonstrations also signaled disapproval of Oman’s alliance with Washington and London. In fact, prior to 2004, the US military used Oman’s facilities for its operations in Afghanistan and Iraq.

Looking forward, Oman’s relationship with China — the world’s largest economy — has great potential to grow. Beijing has not played an aggressive role in the Mideast since the Dhofar Rebellion, which ended in 1976. Although human rights issues in Xinjiang and China’s support for the Syrian regime have led conservative Gulf Arabs to criticize Beijing, China ultimately does not carry the same baggage on the “Arab Street” as does the United States. Thus, the ruling monarchy faces fewer political risks by reinforcing its ties with Beijing. Economically, the energy demands from China’s middle class will ensure that the world’s most populous country remains Oman’s top destination for oil exports, especially as the United States becomes progressively less reliant on Middle Eastern oil.

At this juncture, unknown variables surrounding Oman’s succession issue — the ailing, 74-year-old Sultan Qaboos bin Said Al Said has not named an heir — have left many analysts speculating about the Gulf Arab nation’s future, both domestically and on the international stage. Although unpredictable factors will shape Oman’s future, it is difficult to imagine China not playing an increasingly important role as a vital strategic partner of the sultanate, regardless of who succeeds Qaboos.