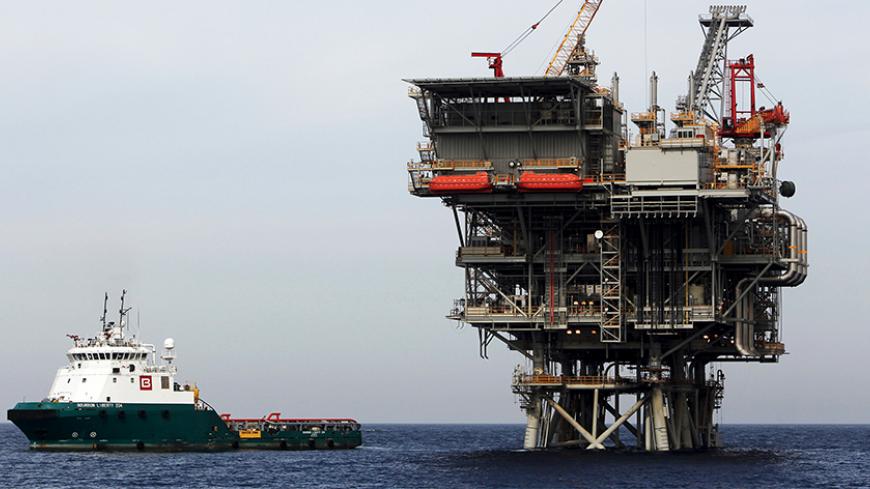 An Israeli gas platform, controlled by a US-Israeli energy group, is seen in the Mediterranean Sea, some 15 miles west of Israel's port city of Ashdod, Feb. 25, 2013. - REUTERS/Amir Cohen

The giant American Noble Energy US oil and gas producer has been inside the eye of a formidable public storm in Israel this year. This storm has recently shown threatening signs of mutating into an extensive social-justice protest movement, similar to the one that swept the streets of Tel Aviv in the summer of 2011.

Noble is the main partner in the large discoveries of natural gas found off Israel’s shores in recent years, in the form of the massive gas fields called Leviathan (2010) and Tamar (2009). Together with its Israeli Delek Drilling partner, Noble has a monopoly on the natural gas domain and the supply of energy to the Israeli market; this angers many social-justice organizations and important media and public personages. The government, headed by Prime Minister Benjamin Netanyahu, has been trying for a long time to launch the ''natural gas outline'' with these two companies included. This outline agreement would determine the export quota that the state would allow from these reservoirs, the framework of future prices and a time schedule for the development of the reservoirs.

The protesters argue that heavy US pressure and foreign interests cause the government to “give in” to Noble and Delek. In other words, they claim that the government is agreeing to prices that are much higher than the going market prices and allowing an outline that will harm the rights of the Israeli public and its ownership of Israel’s natural resources. The protests have been growing in recent weeks as reflected in a television series on the topic that is currently being aired ("The Silver Tray") and in demonstrations taking place every week that attract thousands of people.

On the other side of the street, Noble has been trying to steamroll an agreement with the assistance of the US administration and US ambassador to Israel Dan Shapiro who, naturally, are trying to help the company promote US interests and its business affairs in Israel. Noble’s more important ally in this struggle is Netanyahu, who is working hard to get the gas-outline agreement authorized and jump-started. As of Nov. 23, Netanyahu’s efforts — which included the resignation of Economics Minister Aryeh Deri, who refused to sign the outline — have borne fruit. It looks like the agreement will soon be ratified; then it would hit the road.

The strategic problem involved in the gas conundrum is that in spite of the discoveries of very large Israeli natural gas reservoirs in recent years, the state is still dependent on one submarine gas pipeline and one gas reception facility. This constitutes a serious security and safety problem and negatively affects Israel’s “energy security,” which operates in a very troublesome neighborhood. In this neighborhood, the only thing we can be certain about is that nothing’s certain.

On this background, a revolutionary concept has been floated recently regarding the establishment of artificial islands opposite Israel’s coast; these would host the state’s main infrastructure facilities. The idea was proposed by two close Netanyahu associates. One is Shaul Chorev, who until recently headed Israel’s Atomic Energy Committee and was a former brigadier general in the navy, and the other is Zvi Marom, founder and chief executive of the Israeli technology firm BATM Advanced Communications. Netanyahu worked under Marom after Netanyahu lost the 1999 elections; since then, the two are considered to be close associates.

The artificial-island proposal contains an additional, even touchier idea: the option for civil nuclear energy in Israel. Since Israel is not a signatory to the international Treaty on the Nonproliferation of Nuclear Weapons (according to foreign sources, Israel is a military nuclear power), it is not allowed to establish a nuclear power station on its territory. The idea envisioned is that of an artificial island, constructed off Israel’s coast by a foreign power and declared “extraterritorial,” or alternatively, under the sovereignty and ownership of that same power. Then the foreign power could construct a nuclear power station on the island to provide energy to Israel. Under certain circumstances, such an enterprise could pass global regulation and become a reality. This is dependent on US support, and the odds for pulling it off would be much higher if the Americans would be the ones to carry off the project, if they would own and manage it. Of course, we’re not there yet; at the moment, this is only an idea.

Chorev and Marom’s idea is simple: Israel would propose an international tender for constructing the islands using the build-operate-transfer method. The first island would serve as an infrastructure-installation to coordinate the entire natural gas issue: a storage, liquefaction (if necessary), stocking and reception facility. The international company winning the tender would build the island at its own expense, then would operate it and receive royalties for many years until handing it over to the Israeli government. This is the way the cross-Israel highway (Highway 6), viewed as a tremendous success, was built more than a decade ago. Israel would be the signatory on a gas-supply contract vis-a-vis the foreign company, and the project might even be carried out by a foreign government. “Just imagine that the Russian government executes the gas project,” Marom told Al-Monitor last week. “Now just think what would happen if Hezbollah would consider attacking this project with the Russian missiles it owns. They’d get into trouble with [Russian President Vladimir] Putin, which would be preferable, from our point of view.”

At a later stage, additional islands could be built for hosting additional infrastructures. Israel is a crowded, dense country in which dangerous installations exist very close to population centers. This is a factor in the nuclear energy issue as well. Israel has always wanted nuclear energy for peaceful purposes, but is unable to build civil nuclear reactors due to the restrictions noted earlier in this article. At one time attempts were made to convince the United States to make an exception for Israel and back such a reactor, but the Americans refused. Afterward, ideas were raised for having the Americans construct a nuclear reactor in a certain area in the Negev in Israel's south; the area was allocated for the project and remains set aside until this very day. This nuclear reactor was supposed to have been under American sovereignty, the territory on which it was to be built was to be declared “extraterritorial,” akin to a foreign embassy. But this idea was also shelved.

Chorev told Al-Monitor last week that once upon a time, the Russians had offered Israel a transportable, floating nuclear power plant. This plant was to float off the country’s coasts in Russian nuclear vessels, of the type that the Russians decommissioned in large numbers after the dismantling of the Soviet Union. Such sea vessels that would dock permanently near Israel’s coasts could create nuclear energy for use by the Israeli economy. But this initiative was also stillborn.

The artificial-island project is up again for discussion. Years ago, Netanyahu backed the concept and created a planning-focused think tank that worked on the idea. Netanyahu even passed a government resolution in 2012 to issue an RFQ, or request for quotation public bidding process. However, nothing has moved since then. The government froze the entire project and an RFQ was never issued.

Now Chorev, who just retired from chairmanship of Israel’s Atomic Energy Committee, and Marom, who continues to dream about the project as an enterprise of great strategic importance, are trying to pull the wagon out of the mud. “You’ll become another Ben-Gurion [Israel's first prime minister],” they tell Netanyahu. Currently, the prime minister has more urgent problems on his agenda, but the two entrepreneurs — who are not asking for any part in the project or payment for their labors — have no intentions of giving up so fast.

Israel is a tiny country without land reserves and without options for expansion to the east, north or south. All it has is a large ocean to its west. The time has come, say Chorev and Marom, to expand into the sea. It is waiting for us.