Prime Minister Benjamin Netanyahu's adamance in pursuing a deal for exploiting Israel's natural gas, despite it being roundly criticized by regulators, appears to have tentacles to casino mogul Sheldon Adelson and the US-Israel Business Initiative. 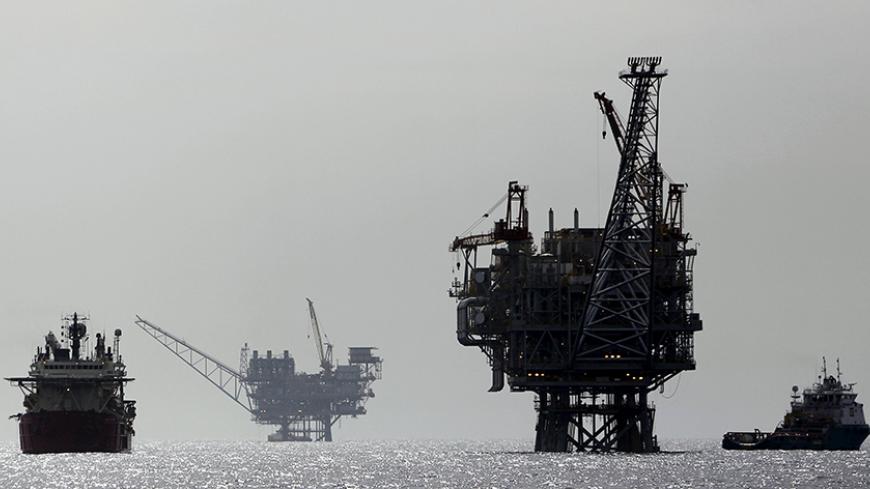 An Israeli gas platform, controlled by a US-Israeli energy group, is seen in the Mediterranean Sea, some 15 miles (24 kilometers) west of Israel's port city of Ashdod, Feb. 25, 2013. - REUTERS/Amir Cohen

“You can quote me: I don’t give a damn.” It would seem that this succinct phrase directed toward participants at the Electricity Authority session (Aug. 6), convened to depose Chairwoman Orit Farkash-HaCohen, sums up Prime Minister Benjamin Netanyahu’s conduct concerning the natural gas issue — an issue that is worth hundreds of billions of dollars.

Netanyahu’s disdain was immediately directed at Deputy Attorney General Avi Licht, who warned against the legal implications of deposing Farkash-HaCohen and appointing a replacement without tender. Her sins were in warning that Netanyahu’s natural gas plan would result in a steep rise in domestic utility bills and her refusal to approve the natural gas contracts with the Tamar gas field cartel. Now, it turns out that Netanyahu’s contempt had also been directed at Licht’s boss, Attorney General Yehuda Weinstein. In a letter to the state comptroller, Weinstein remarked that Energy Minister Yuval Steinitz, the prime minister’s yes man, had promised him that the incumbent regulators' status would not be hurt by the planned Electricity Authority reforms.

Farkash-HaCohen was not the first regulator to pay with her or his job for refusing to ignore what she thought was the public’s best interests. Before her, there was the antitrust commissioner, David Gilo, who warned in a May resignation letter against the disastrous implications of the gas plan on Israel’s defense and foreign affairs and on its energy independence. Gilo, pushed aside by Netanyahu, expressed his hope that government ministries would change their position vis-à-vis the plan. In an Aug. 16 Cabinet vote, however, 17 of the ministers voted in favor of the plan. Finance Minister Moshe Kahlon, Housing and Construction Minister Yoav Galant and Welfare Minister Chaim Katz abstained due to conflicts of interest. Environmental Protection Minister Avi Gabai returned from an overseas trip for 24 hours to vote against it. Gabai joined critics of the plan who argue that exporting gas before other reservoirs are developed could create a shortage of domestic energy sources and result in a cost of living spike.

The natural gas cartel affair is accompanied by more than just grating verbal contempt. Suspicious flair requires a thorough investigation. In an article in the Israeli financial daily The Marker, analyst Avi Bar-Eli wondered what had happened to the Netanyahu of 2005, who as finance minister compared the government’s electricity cartel to the Nazi destroyer “Bismarck” and two years earlier likened the market cartels to a Bermuda Triangle threatening the country’s future. What, Bar-Eli wondered, is making the prime minister push forward on a gas cartel that controls public assets to the tune of a trillion shekels ($250 billion). Is this another case in which the explanation for Netanyahu’s behavior lies in the casino and freebie newspaper Yisrael Hayom owned by his patron, the casino mogul Sheldon Adelson?

A hint of Adelson’s link to the gas cartel can be found on the website of the US-Israel Business Initiative, a lobbying group whose stated goal is to increase American companies’ access to the Israeli market. Adelson, CEO of the Las Vegas Sands Corporation, tops the list of executive board members. Also on the list is Keith Elliott, senior vice president of Noble Energy’s Eastern Mediterranean operations. Noble, together with the Delek Corporation, has a controlling interest in the Tamar natural gas reservoir. Two months ago in Haaretz, the investigative journalist Uri Blau published a photocopy of a letter Adelson sent last summer to Netanyahu in his capacity as head of the initiative. In it, Adelson suggests that the prime minister streamline regulation of Israel’s natural gas assets and update the free trade agreement between Israel and the United States.

Adelson’s letter was the only document appended to an invitation sent a month later from the Alternative Fuels Administration, attached to the prime minister's office, to representatives of most government ministries to attend a discussion on “promoting economic relations with the US.” Afterward, one of the participants reportedly told Haaretz, “It was an attempt to build a platform that would allow business interests to be part of the official decision-making mechanism.” The prime minister’s office and Adelson’s office said in response that their relationship was in no way related to business issues.

Adelson was not the only American to stir this steaming pot. Last December, it was US Secretary of State John Kerry who turned to Netanyahu asking him to remove an obstacle that Gilo had placed in Noble Energy’s way. Kerry’s office explained that his involvement on the part of the company stemmed from concern about the natural gas deal between Noble Energy and Egypt and Jordan and the importance he attributes to all countries in the region having “a strong investment climate, including a consistent and predictable regulatory framework.”

Concern over supplying gas to neighboring Arab states and the Palestinians was also the explanation provided for the unusual appeal by the US Embassy in Israel to the Arab members of the Knesset from the Joint List to drop their opposition to the gas plan. In normal times, interference with such an issue at the heart of a major political controversy would have provoked a strong reaction. But in days when Israeli politicians are deeply involved in internal American politics, no one dares to say a word or protest. When the prime minister thumbs his nose at the US president and at the UN Security Council for approving the nuclear agreement with Iran, claiming it’s a “bad deal,” no wonder the Israeli public lets him thumb his nose at regulators who object to the natural gas distribution and benefits plan, because it perpetuates a “bad cartel.”

During the Aug. 6 meeting at which the prime minister thumbed his nose at Licht and Weinstein, Netanyahu said, “A minister has to make decisions. A government has to rule.” A report issued July 20 by the state comptroller directed sharp criticism at the decision-making process and the quality of governance of Israel’s natural gas. The gas portfolio is too important and too expensive for it to be put away in the dusty drawers of the comptroller’s offices. It would behoove all the subjects of Netanyahu’s disdain to take seriously the demand by Yaron Zelekha, former accountant general of the Finance Ministry, to launch a criminal investigation into the “clandestine allocation” of the greatest treasure that nature has bestowed on the citizens of Israel.