The scandalous audiotape of Yair Netanyahu must be examined by the legal authorities to see if Prime Minister Benjamin Netanyahu acted wrongfully when authorizing the 2015 natural gas deal. 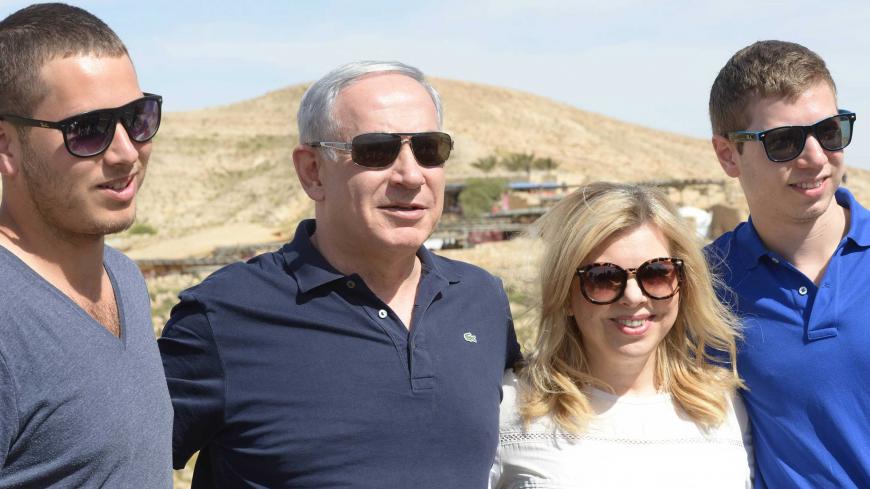 On Jan. 8, Israeli Channel 2 news published an audio recording of Yair Netanyahu, Prime Minister Benjamin Netanyahu’s son, speaking with Nir Maimon, the son of Israeli tycoon Kobi Maimon. The conversation took place in 2015 during a night of excess in Tel Aviv. The language used, as much of the content of the conversation, captured news headlines.

Now, imagine one of the major news outlets in the United States airing a recorded conversation in which President Donald Trump’s son is heard telling the son of an American gas tycoon, “My father cut a great deal for your father, bro. You should be thanking me. My dad fought Congress to push this through, bro. … My dad just arranged for yours to make $20 billion. True, my father shafted you with the committee that debated the US gas regulation initiative, but later he made it right. … My dad arranged $20 billion for your dad, and you’re whining with me about 400 shekels?” How many hours would it take the Justice Department to appoint a special counsel or for the FBI to launch an investigation into suspected bribery of major proportions and to summon all those involved?

It’s hard to believe that US investigators would have been taken in by claims that the recording featured nothing more than meaningless chatter by a couple of frivolous youths who had imbibed one too many. On the contrary. George Papadopoulos, who served as a Trump foreign affairs adviser, recently affirmed the Talmudic saying that “when wine goes in, secrets come out” (Sanhedrin 38a). In an alcohol-induced confession to an Australian diplomat in a London bar, Papadopoulos confided that Moscow was in possession of incriminating information about then-presidential candidate Hillary Clinton. Attempts by Trump adviser Michael Caputo to portray Papadopoulos as a clueless errand boy with no access to significant information on Trump’s campaign failed to stop the snowball that is now nearing the Oval Office.

Even if Yair Netanyahu’s father did not exactly “arrange” for gas mogul Maimon to make $20 billion, an investigation is in order to find out whether Netanyahu Junior did not lift the lid off a Pandora’s box of corruption.

This could turn out to be bigger than all the current suspicions against Netanyahu and his associates put together — the 1000 case (Netanyahu allegedly receiving benefits from businesspeople), the 2000 case (Netanyahu and Yedioth Ahronoth publisher Arnon Mozes plotting a deal for positive coverage), and the 3000 case (the German submarine deal). In 2015, the time of the conversation between Yair Netanyahu and Nir Maimon, their parents were knee deep in efforts to advance the controversial natural gas outline. Yair Netanyahu did not come up with the $20 billion figure out of thin air. As journalist Avi Bar-Eli wrote in The Marker financial daily after the recording was aired, the natural gas plan “gave the owners of the Tamar gas field, allegedly including Kobi Maimon, one of the biggest gifts ever approved for any business entity.”

According to Bar-Eli, Netanyahu authorized the owners of the gas monopoly to continue charging power companies and industrial manufacturers inflated prices for gas. The prime minister rejected the demand by the Electricity Authority regulator to amend the contract, and at the same time he refused to impose any supervision on gas prices. The State Comptroller estimated the damage to the economy at 7.5 billion to 8.5 billion shekels ($2.2 billion to $2.5 billion). These, claimed Bar-Eli, were conservative estimations only. In fact, additional costs of the gas outline could double the utility bills of Israeli consumers. It’s hard to fathom why Israeli enforcement authorities have ignored the stench wafting from the gas plan, a multibillion shekel deal for which Netanyahu put up a mighty fight. If the attorney general and Israel police chief continue to hold their noses, the Supreme Court may force them to let go and order an investigation.

But what would happen if in the future evidence reveals that Netanyahu received something in exchange for what he offered Maimon? What would happen if Netanyahu is indicted for receiving a bribe? Not of accepting pricey cigars and pink champagne, as currently suspected in case 1000, nor of an attempt to shift an influential tabloid to his side as in case 2000, but for taking money directly into his own pocket? What then? In any case, the law in Israel does not require a prime minister indicted on criminal charges to step down. Netanyahu and his Likud yes men have already announced that he plans to conduct his legal defense and the affairs of state at the same time. There’s also nothing holding him back from running for a fourth consecutive term as prime minister. A prime minister can only be removed from office if he cannot fulfill his duties. Interior Minister Aryeh Deri holds a senior government post even though he did jail time. Why unseat a fully functioning prime minister who is only under suspicion?

Twenty-two years ago, in his first stint at prime minister, Netanyahu was asked how long he would like to serve in office. “Four years? Eight years? Twelve years, or till the end of time?” popular talk show host Dan Shilon asked. “I have an answer engraved in stone,” Netanyahu answered. “I was one of those who initiated and pushed through the legislation mandating direct election of the prime minister and I said he would be limited to two terms.” He added, “If we don’t do something in the first term, perhaps we will do what needs to be done in the second term, but you don’t need more than that. Do what you have to do, and go home, politically speaking.” Still, Netanyahu refuses to go. He even waged all-out war against proposed legislation limiting a prime minister to two terms — proposals that were based on the same arguments he himself put forth at the time. After all, kings are crowned for life.

From the day he was born, Yair Netanyahu was weaned by his mother and father on the mannerisms of royalty. The rotten apple has not fallen far from the tree. From morning to night he heard his father and his associates attacking police investigators and legal authorities, with the mantra of “Nothing will be found because there is nothing.” He learned that his parents were immune to public criticism. He watched his mother taking leisurely jaunts around the world, holding his father’s hand with one of hers and the other gripping a judicial ruling that she had abused staff at the prime minister’s official residence. He has come to realize that he can spit in the face of his fellow citizens and still be hailed as a rainmaker. The prime minister and his family could even come out of this whole disgusting affair as the downtrodden victims of fake news. They will continue to abuse the democratic system and rule Israel all the way into an abyss.