How dominant is Netanyahu’s son in his father’s campaign?

Prime Minister Benjamin Netanyahu’s son Yair seems to be extremely involved in his father’s election campaign, stirring it in his aggressive and insulting style. 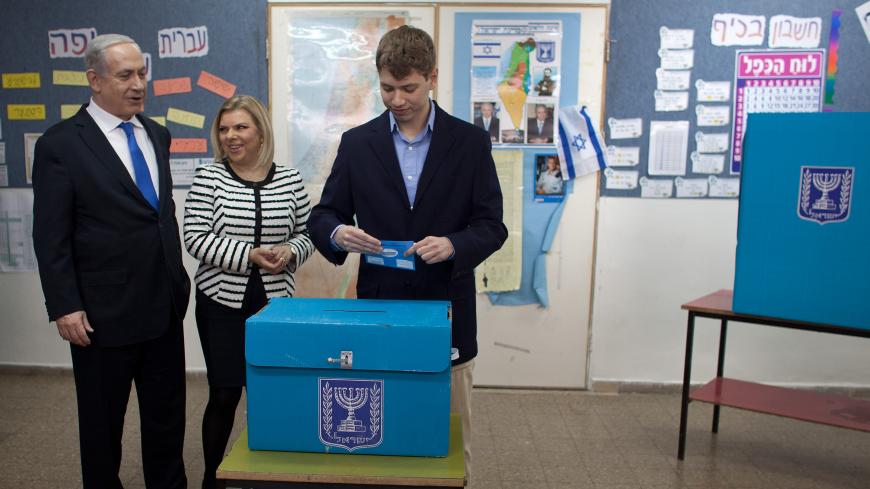 The name of Yair Netanyahu, the prime minister’s son, has been associated in recent years with countless scandals. We don’t have room to enumerate them all here, but in order to get to know the personality in question, the following are some of the headlines for Yair — the son who is firing in every direction and drawing fire in return.

In January 2018, the News Corporation revealed recordings of conversations Yair held with his friends as they returned from a strip club. He spoke derisively toward women, including a young woman he had been in a relationship with, and even boasted that his prime minister father granted a favor to his friend’s father, the gas tycoon Koby Maimon, totaling 20,000 billion NIS ($5.5 billion). By the way, the trip to the strip club was in a Shin Bet vehicle and with its security.

His wild, arrogant and dissolute behavior, and his venomous disparagement of politicians and security personnel by cyberbullying would remain in the gossip columns if Yair didn’t have an active and even a central role in the election campaign conducted by his father. While neither Yair nor the prime minister’s close circles nor senior Likud officials have ever admitted that Yair has an active role in the inciteful campaign of the elder Netanyahu, this week we received proof of it. The right-wing organization Shurat Din, where Yair has worked as a new media coordinator for the past six months, let him go on an extended vacation until after the April 9 elections in light of the vitriolic remarks he posts on social networks on March 12. Haaretz quoted a source from the organization, who said that Yair requested to go on vacation because “he’s a significant partner in shaping the messages of the Likud’s campaign.’’ That is, the dagger is out of the bag. Yair isn’t acting as a rebellious son his parents can’t control but is a key part of the Likud’s negative, hate-filled campaign.

Here we should note that in the past Yair brought several of the friends who served with him in the Israel Defense Forces spokesman’s unit into the prime minister’s hive. They work in public information, media and new media, and they all, it seems, have adopted his callous style.

One final and prominent example of his behavior is his unrestrained disparagement of Israeli President Reuven Rivlin. It’s no secret that the Netanyahu family is not fond of the popular president. Prime Minister Netanyahu tried to prevent his election to the extent that he tried but didn’t succeed to bring about the elimination of the institution of the presidency. On March 11 — the day the president’s wife, Nehama Rivlin, had a lung transplant at Beilinson Hospital — Yair attacked President Rivlin for his support of Rotem Sela’s remarks. “It’s all because some of your people chose terrorism; why are you surprised?” Yair rudely tweeted, paraphrasing Rivlin’s words after the murder of the Palestinian Dawabsha family by Israeli assailants in July 2015. At the time, Rivlin wrote that he was embarrassed over the path taken by his own people who were choosing terrorism.

In 2017, after President Rivlin rejected the pardon request of Elor Azariah (the shooting soldier from Hebron), radical right-wing elements distributed a photo of the president wearing a Palestinian keffiyeh. Prime Minister Netanyahu didn’t respond to the incitement at the time, even when Knesset members asked him to defend the president and defend the institution of the presidency from the right-wing bullies. Even now, when his son feels free to address the president of the State of Israel in such a manner on a day when his wife is undergoing a dangerous and complicated surgery, the elder Netanyahu remained silent. Even after the Blue and White party and the Labor party defended the president and demanded the prime minister rein in his rebellious son, he didn’t respond. “Control the mouth and keyboard of your son,” read a Blue and White statement. It continued, “Your incitement against the president of all of us has crossed every line.”

The next day, Yair attacked again. This time, the target was former head of the Mossad Shabtai Shavit. “I encountered a heated argument between Yair Netanyahu and Dr. Yoaz Hendel [a candidate with Blue and White] — the son shows outrageous ignorance,” tweeted Shavit. "He doesn’t understand that his father erased [Palestinian President Mahmoud Abbas] Abu Mazen in order to fatally kill the idea of separation [from the Palestinians] and is conducting an intensive negotiation with Hamas,” read the tweet. Yair tweeted in response, “What an idiot, scary to think that you had a security role.”

It could likewise be said how scary it is to discover that these are the messages Yair learned in the prime minister’s home: hatred of Arabs, hatred of the left and disparagement of anyone who thinks differently from him — even if he’s a former senior security figure.

In the past, Yair has attacked journalist Amnon Abramovich, who received an honorable citation from the chief of staff for heroism he showed in the Yom Kippur War. Yair called Abramovich — who was burned all over his body in the war — “a Soviet propagandist.” What my colleague Ben Caspit, author of a biography on Prime Minister Netanyahu, wrote in response is all the more applicable today: “This parasite, who has never worked for his living, who did his army service at the army spokesman’s unit … boorishly disparages a war hero. But then I remember where this ne’er-do-well grew up, and I understand that he’s not really to blame.”