Israeli far-right activist betrayed by his own

Last year, far-right activist, journalist and former Knesset member Sharon Gal launched hate campaigns against those defending democracy and freedom of expression, only to become a victim of the monster he created. 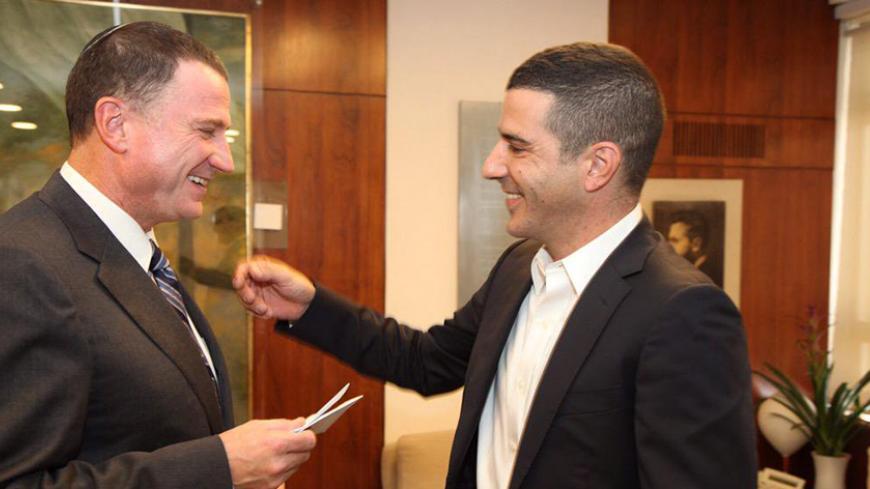 Sharon Gal (R) with the speaker of the Knesset Yuli-Yoel Edelstein in this undated photo. - Twitter/@sharongal

A few weeks after the current Knesset was sworn in in March 2015, Meretz Party members recited at the plenum a selection of testimonies by soldiers, collected by the group Breaking the Silence, which was documenting testimonies from soldiers on Israel Defense Forces' (IDF) conduct in the West Bank and the Gaza Strip. In these testimonies, the soldiers described several wrongdoings committed against the Palestinian population in Gaza during the 2014 Operation Protective Edge. The atmosphere heated up quickly. A group of Knesset members from the right, headed by Oren Hazan of Likud and Sharon Gal of Yisrael Beitenu, lashed out with a fury, using incendiary language against their fellow Knesset members from Meretz.

Gal, a journalist, was recruited by Defense Minister Avigdor Liberman right before the election, and deemed his party’s rising new star. During that particular session, however, Gal disparaged the left relentlessly, as if he was possessed. He called the Meretz Knesset members “collaborators” and chastised them with comments like, “You’re criminals and should be ashamed of yourselves!” After three calls to order, he was removed from the chamber. He was still fuming.

In his brief political career, which ended with his resignation from the Knesset after about half a year, Gal was responsible in no small way for nudging the discourse between right and left to new extremes when that discourse was already on a collision course.

Gal provided his “statement of intent,” indicating what lies ahead in his Knesset career, when he used the first day of the session to submit a law calling for a death sentence for terrorists. Until his resignation from the Knesset in September 2015, Gal lashed out at the left whenever he had a chance — in Knesset committees, social networks and news shows. Sharp and eloquent, he had no reservations about saying exactly what he felt. Using that, he fostered his own image as a celebrity among the right, including the far right.

His sudden resignation came as a surprise, though he explained that he was not having the kind of impact he anticipated. Yet — although he may have left the Knesset — Gal did not abandon his commitment to the political right wing. He landed a cushy job as senior anchor on Channel 20, which is considered the home channel of the right. He also became an activist of sorts when he launched and managed the campaign in favor of indicted IDF soldier Elor Azaria, who killed a wounded Palestinian assailant. Gal is a man of many talents who multitasks on behalf of the right.

Gal’s endeavors couldn’t protect him the week of Oct. 23, when he dared to disavow Ofer Golan, the head of a radical right-wing organization named Fighting the Palestinian Lie. Golan made headlines when he appeared in the film “And One for All,” which aired on Channel 2. In it, he can be seen wishing for the death of senior news commentator Amnon Abramovich because of his “left-wing views.”

As a soldier, Abramovich was severely wounded in the 1973 Yom Kippur War. He suffered burns over most of his body when he tried to pull the members of his crew out of the burning tank that he was driving. He was later awarded a medal for his heroism.

The aforementioned film shows Golan chasing after Abramovich, screaming, “You are a traitor to your people, you piece of garbage! It’s too bad you didn’t burn to death in your tank. … He’s the reason that the soldier [Azaria] is in jail.”

Gal was shocked, and rightly so. It is quite possible that his well-honed senses warned him that Golan had caused enormous damage to the right’s public image and the struggle to obtain the release of Azaria, who is now on trial. As Gal wrote on his Facebook page, “There is a vast chasm separating Amnon Abramovich and me, a C-H-A-S-M. Nevertheless, it disgusts me to see one Jew say to another Jew, ‘It’s too bad that you were only injured in your tank during the Yom Kippur War, and that you weren’t killed.’ There is no place for that. It is inappropriate.”

Suddenly the roles were reversed. From that very moment, Gal himself became a “leftist” and punching bag for the right. A thick shadow was cast over his reliability. He was pummeled on his Facebook page in a campaign led by Golan and his friends. While the online discussion shows that Gal tried to explain why Golan and his friends are actually harming the right-wing cause, no one paid him any attention.

Journalist Guy Lerer later instigated a television debate between Gal and Golan on his show, “The Tube,” on Channel 10. It is an important debate, well worth watching, especially for right-wing opinion shapers, since it shows how the sword has been turned all of a sudden against Gal. Until very recently, Gal himself was behind verbal violence against the left as both a journalist and a member of the Knesset. Now he is forced to defend himself from attacks by people from his own camp.

There were many offensive, disturbing and even grotesque moments in the TV debate, which were reflected in Gal’s uncomfortable body language. How ridiculous was that debate? Here is an example:

Gal challenged Golan, saying, “You handed the left the fuel they need to say, ‘This is what the right is like.’ … I want to tell them right here, right now, that you are not the right. In my opinion, you do not represent the right in this particular discussion about someone who is an IDF disabled veteran. There must be some red line in the discourse.”

Golan responded, “I represent 80% of the people of Israel. … I will continue to take action against the extreme left, because they are a poison to our society and our country.”

It went on and on. Golan refused to apologize either to Abramovich, whom he called a “fifth columnist within the media who is collaborating with the enemy,” or to Gal, whom he accused, among other things, of abusing the funds raised for Azaria’s campaign. He used the opportunity to slander Gal and impugn his reputation.

The overall impression after watching this debate is that Gal came out of it battered and bruised, a victim of the shallowness and verbal bullying of the far right, which is growing in influence and expanding in the age of social networks.

Returning to the beginning of this piece, it seems clear that until rather recently, Sharon Gal himself played the role of Ofer Golan. He called Knesset members from Meretz “criminals” and participated in Channel 20’s incitement campaign against President Reuven Rivlin — himself a supporter of the right — simply because Rivlin participated in a conference organized by daily Haaretz and Breaking the Silence in December 2015. At the time, Gal used the media to offer a fearless defense of Channel 20 when it published a manifesto stating, among other things, that Rivlin’s presence at the conference disgraced the institution of the presidency, and that the president of Israel must never spit in the faces of IDF soldiers.

This time it is Gal who should be taking account of his actions. He was also one of the people who let the genie out of its bottle. As such, an apology from him wouldn’t hurt.