Egyptian politicians and public figures have created dozens of initiatives to bring tourism back to Sharm el-Sheikh after Western countries decided to suspend their flights to Sinai in response to the Russian plane crash there. 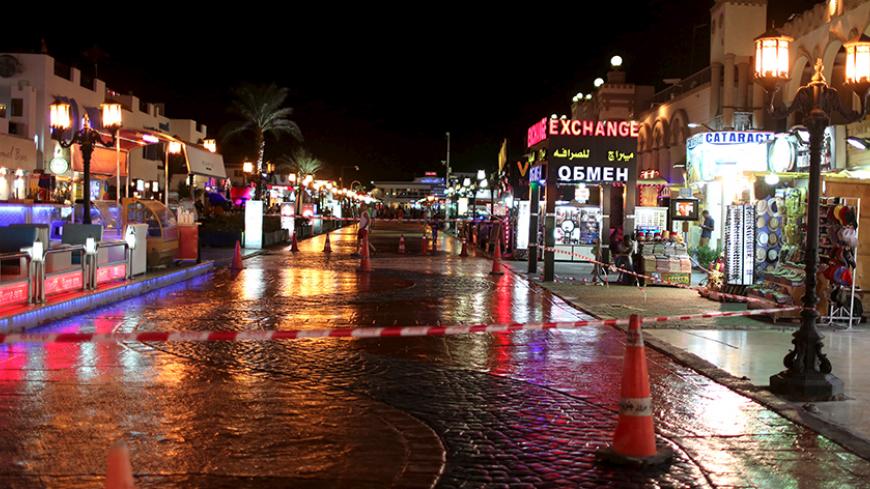 CAIRO — Dozens of initiatives have been introduced by the Egyptian Interior Ministry, politicians, public figures, artists and media outlets to breathe life back into the tourism sector of Sharm el-Sheikh, which relies largely on Russian tourism. The efforts come after Russia, Britain and France decided to suspend their flights to the city and call back their citizens in the wake of the Russian plane crash in the Sinai Peninsula on Oct. 31.

El-Watan newspaper described in its “I’m going to Sharm” campaign that the decision by Russia and Britain to ban flights to Sharm el-Sheikh is a conspiracy against Egypt. Egyptian Foreign Minister Sameh Shoukry lashed out at the Western countries, mainly the United States and Britain, which had announced that the plane was likely brought down by an act of sabotage before the results of the Egyptian and Russian investigations were published.

Egypt’s El-Watan newspaper had started the “I’m going to Sharm” initiative on Nov. 6, a few hours after Britain called on its citizens to return home. Britain was the first country to send airplanes to fly its citizens back from Sharm el-Sheikh without waiting for the results of the investigation. Eight flights were scheduled to transport the 20,000 British tourists from Sharm el-Sheikh, according to the statements of the Egyptian Minister of Civil Aviation Hussam Kamel.

On Nov. 7, Russia followed suit and sent 44 planes to transport its citizens from the city. On Nov. 7, the Russian Foreign Ministry's Federal Agency for Tourism told Russia Today that there are currently 79,000 Russian tourists in Egyptian resorts, and they will return to their country in several stages.

El-Watan newspaper called on Egyptians to visit Sharm el-Sheikh to support tourism and show solidarity with those employed in this sector. The newspaper stated that Egypt is facing an economic war and blockade and encouraged Egyptians to visit Sharm el-Sheikh during the Christmas holidays and asked them to send photos to be published in the newspaper to support tourism.

El-Watan’s move inspired similar efforts by dozens of public figures and politicians, including the president of the Committee of 50 for the Amendment of the Constitution, Amr Moussa; head of the Democratic Egyptian Party Mohamed Abou el-Ghar; and head of Cairo University Jaber Nassar, among other political parties, athletes and artists.

On Nov. 11, the Egyptian Cabinet consecrated a special budget of at least $5 million to implement an intensive international public relations campaign to stimulate tourism in Sharm el-Sheikh.

Board member of the Chamber of Tourism Federation Naji Aryan told Al-Monitor that the efforts will boost the morale of workers in the tourism sector and will positively affect the business sector by improving local tourism. Still, the efforts remain morale oriented rather than financial, he said, adding that these activities will not play a major economic role because Egypt needs US dollars, which it will not receive from stimulation of local tourism.

“The initiatives mainly aim to decrease the transportation and accommodation expenses in Sharm el-Sheikh to encourage Egyptians to visit, which means that the financial effect will be weak. Besides, the general environment in Sharm el-Sheikh is [directed at foreign tourists] and differs from what many Egyptians are accustomed to,” he added.

Aryan noted that recovery will depend on the results of the investigations. Aryan said that tourism in Sharm el-Sheikh will get back on track quickly because of pressure from all the foreign companies that contract with hotels there. He added that the suspension of flights by foreign governments is burdening these companies with massive losses daily. Therefore, they will pressure their governments to end the travel ban.

Hamdi asserted that the authority held several sessions to organize parties in Sharm el-Sheikh and plans to throw the first party on Dec. 20. An unidentified Egyptian star is supposed to sing, and the head of the Musicians Syndicate, Hani Shaker, will prepare an artistic program to be followed in cooperation with the authority to organize parties and shows in Sharm el-Sheikh.

Hamdi said he wished that all initiatives supporting tourism in Sharm el-Sheikh would be organized under the umbrella of the Egyptian Ministry of Tourism’s campaign, “Sharm el-Sheikh is in our hearts,” which will create a program to facilitate Egyptians traveling to Sharm el-Sheikh.

Hamdi noted that this initiative will begin on Nov. 15 in Sharm el-Sheikh and will last until the end of the tourism season on April 30, 2016. It will work to repair the image of tourism and to encourage the Russian and British governments to lift their travel bans.

Hamdi stated that the authority is also preparing a program to stimulate Arab tourism. He noted that the market for Arab tourism aligns more closely with general norms and traditions of Egyptians. The foreign countries that did not ban travel to the city, such as Ukraine, Italy, the Czech Republic and Hungary, will also be addressed. He said, “We will launch campaigns and head to new markets like Latin America, and we will try to learn from our mistakes. We should not focus on one market only, but rather aim at being present in various markets.”

Mo’taz al-Sayed, head of Tour Guides in Egypt, told Al-Monitor that while these efforts look good on paper, he doesn't expect results. He described them as attempts at reassurance that will not bear fruit. Local tourism will not compensate for the losses that the sector will suffer from limited foreign tourism.

Sayed said that the efforts promise to benefit Egypt's image, especially following the plunge in foreign tourism to Sharm el-Sheikh. Local tourism will also prove useful in that sense, even if not immediately profitable.