Residents of south Sinai are outraged over leaked reports about the government building a fence that would separate the resort city of Sharm el-Sheikh from the rest of the province. 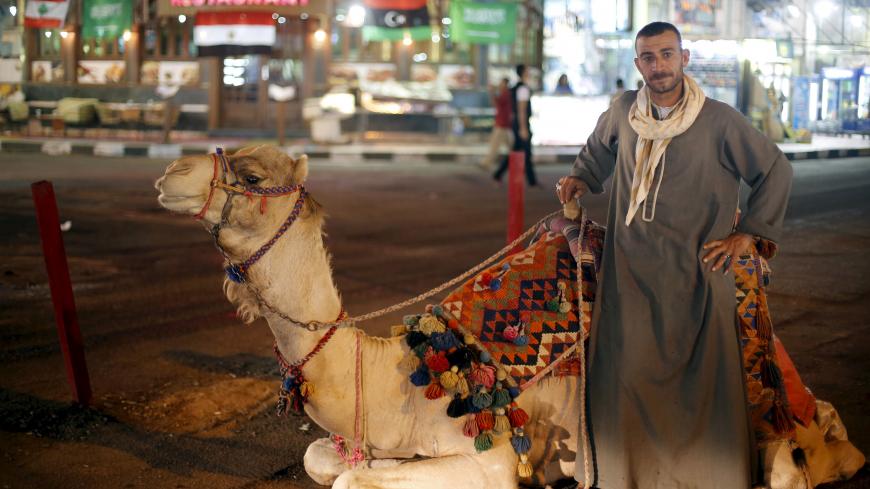 A Bedouin waits for tourists to take a camel ride in the Red Sea resort of Sharm el-Sheikh, in the south Sinai governorate, Egypt, March 27, 2015. - REUTERS/Amr Abdallah Dalsh

CAIRO — The south Sinai governorate has started building a 37-kilometer (23-mile) concrete barrier around the resort city of Sharm el-Sheikh on the Red Sea, stretching from east to west, from Nabq National Park to Ras Mohamed Nature Reserve.

This step coincides with the government’s efforts to revive its tourism sector that has been affected by a Russian plane crash in the area in 2015, in what was classified as a terrorist attack that killed 224 people.

Maj. Gen. Khaled Fouda, President Abdel Fattah al-Sisi’s son-in-law and governor of the south Sinai Peninsula, told Al-Monitor that construction of new gates and a fence began Feb. 1 as part of a 20 million Egyptian pound ($1.15 million) project carried out by the south Sinai governorate to beautify the tourist city.

On Feb. 18, photos began circulating in the media, showing a 6-meter (roughly 20-feet) cement wall, sparking citizens’ fears of encircling the city, according to Fouda.

The Egyptian government was planning to build a fence or concrete wall in 2005 during the days of deposed President Hosni Mubarak, to prevent Sinai Bedouins from infiltrating into the city of Sharm el-Sheikh and to curb terrorist operations.

The Wafd Party objected to this step at the time, claiming that “[a wall] would widen the gap between the government and south Sinai citizens. A wall would not ensure security or prevent terrorism. The amount of 20 million pounds to build the wall would be better invested in providing employment for Sinai citizens and building hospitals and schools, instead of squandering money on isolating them. The wall will fuel terrorism instead of curbing it.”

The fence raised the ire of citizens and tourists alike, claiming that it would prevent passersby from seeing the natural scenery. It also isolates Bedouins living and working in the city from tourist sites.

The government neither denied nor commented on the construction of the wall.

Fouda said, “The aim [of the fence] is to beautify and secure Sharm el-Sheikh. We are doing this for the future [of the city]. The project will help Sharm el-Sheikh recoup lost tourism revenues, as it will reassure tourists to be surrounded by high walls that will prevent terrorist attacks from outside.”

He added that the project is composed of several high concrete barriers and at least 37 kilometers of a barbed wire fence, in addition to four gates to access the city.

Sharm el-Sheikh is located on the southeastern Sinai coast. The area had been uninhabited throughout history until it gained international attention in modern times given its strategic location near the Gulf of Aqaba. Sharm el-Sheikh thus became one of the most popular tourist spots with many resorts that have access to the Red Sea. It also hosts several high-level meetings between local and international officials.

The leaked photos and videos show that the fence, which will be monitored by cameras, will mostly be made of cement and stones. Areas adjacent to the mountains will only have barbed wire and army patrols to maintain a civilized appearance.

Since the June 30 Revolution, terrorist attacks have escalated, killing hundreds of policemen, army officers and civilians. But these attacks never occured in south Sinai; they took place in northern Sinai instead, where most recently on Feb. 16, clashes with militants killed 15 Egyptian officers.

The ban on direct flights from the United Kingdom to Sharm el-Sheikh has been in place since November 2015 following the attack on a Russian plane. Since then, the Egyptian authorities have stepped up security measures in Sharm el-Sheikh, setting up checkpoints on the borders of the city, in the hope that flights from the United Kingdom and Russia would resume.

Head of the city council in Sharm el-Sheikh, Mahmoud al-Sawli, addressed the criticism and told Al-Masry Al-Youm Feb. 18 that the fence is “a net that aims at blocking garbage flying in the direction of the sea, preventing the entry of cattle through Naama Bay and deterring plastics and papers from blowing toward the Gulf of Aqaba and the sea.”

Naama Bay is one of the most famous tourist areas in the city.

Sawli added, “The passage of cattle and camels into Hay El Nour and Naama Bay leads to accidents and creates an uncivilized view.” He said that Saudi Arabia built a net from Mecca to Medina “to prevent camels from causing road accidents.”

Mohammad Hakim, owner of a chalet in Sharm el-Sheikh, told Al-Monitor, “I didn't know about the wall, and nobody told us about fences around the city until photos were posted on social media. When I asked around, I realized it was true but that it was still in the initial stages. I think the wall will hide Sharm el-Sheikh’s beauty with its mountains and deserts and it will not make any difference at the security level. It will only annoy people more.”

Al-Sayed al-Sharif, a regular visitor to Sharm el-Sheikh who owns a shop in one of the resorts, told Al-Monitor, “The fence constitutes an environmental, tourist and aesthetic crisis. It is turning our beautiful city into an ugly prison. Such a wall would cost millions while our country suffers from serious debts; the money could be invested in other projects.”

He said, “The project will not stop terrorism. I think it is money squandering. Even foreign tourists criticized the wall, which they dubbed as racist.”

Sharif added, “The wall gives tourists the impression that anywhere outside the city is unsafe, thus impacting tourism. It would also be sending a message to the Bedouins that they are outcasts who do not deserve protection from terrorism, or that they are terrorists themselves.”