South Sinai governorate announced that Sharm el-Sheikh, the most popular resort in the Sinai Peninsula and on the Red Sea, has been completely enclosed with wire fencing. 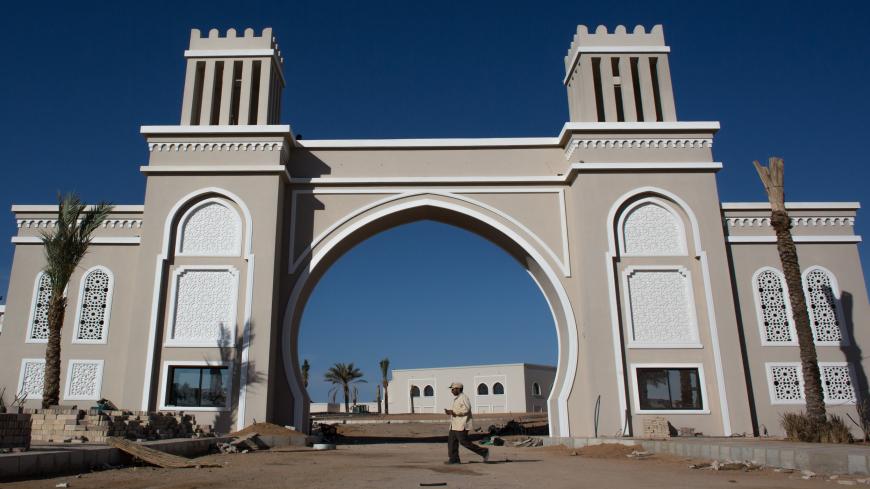 CAIRO — Social media activists passed around a rumor in November 2019 that the Egyptian government was planning to build a 7-meter-high (23-feet-high) steel wall around the new administrative capital, which the state is building in eastern Cairo, but the government quickly denied this rumor. However, the state did end up setting up another barrier, around the resort of Sharm el-Sheikh, in the south Sinai governorate, made up of a concrete wall and wire fencing.

On Feb. 9, Gov. of the south Sinai Peninsula Khaled Fouda released a press statement announcing that Sharm el-Sheikh, the most important and most famous tourist resort in south Sinai and on the Red Sea, has been completely surrounded by a wire fence, extending over some concrete columns, 36 kilometers (22 miles) long and 6 meters (20 feet) high, pointing out that the wall aims to ensure the security and protection of tourists and residents in Sharm el-Sheikh.

News about the wall being finished sparked angry reactions among some citizens, residents and workers in Sharm el-Sheikh, as well as social media activists.

Mohammed Fakhry, a journalist for Al-Gomhuria newspaper, posted on Facebook on Feb. 11, “With the wall around Sharm al-Sheikh, Egypt has become the first country in the world to build an internal separation wall between the cities of one state, without war, occupation or division. European countries have torn down all walls and barriers on the borders between countries and we are building them within the same state between cities and governorates.”

Many posts and TV reports by channels affiliated with the Muslim Brotherhood, which considered that the wall consecrates the racial separation between the people of Sinai, especially the poor, and the tourist resort, say that the state is seeking to use the wall for the advantage of certain groups of Egyptian society and foreigners.

Ahmed al-Sharqawi, former vice president of the Workers in Tourism and Hotels Union, told Al-Monitor that the wall does not aim to isolate or create any racial segregation, as some claim, because it provides an element of freedom of movement to and from the city since it has four gates that allow people to enter or leave with moderate and uncomplicated security measures, just as the measures taken before entering any mall.

He said that what Fouda meant — when he said the wall aims to strengthen security and protection for tourists in Sharm el-Sheikh — was that it would enhance privacy that concerns all tourists.

“Whether you are an Egyptian or foreign tourist, rich and residing in a luxury hotel, a resident of a modest apartment or hotel, a worker or a senior employee, you will have the right to enter Sharm el-Sheikh. The fence is only there to prevent intruders from harassing tourists and residents, regardless of their social status,” Sharqawi noted.

Despite the coronavirus pandemic and the decline in tourism around the world, Sharm el-Sheikh hotels have managed to attract tourists, with an occupancy rate of about 35% of their total tourist capacity, according to the South of Sinai Investors Association.

Kelly Walmsley, director of the Rixos resort in Sharm el-Sheikh, had told the press in February 2019 that the security and privacy of tourists were already maintained through checkpoints along the roads leading to Sharm el-Sheikh, not to mention the surveillance cameras on all the city's roads, which means that the city never needed the fence to provide more security and privacy for tourists or residents.

The south Sinai governorate has tightened security measures in Sharm el-Sheikh, especially after Russian Metrojet Flight 9268 was destroyed in the sky over Sinai in October 2015, resulting in the deaths of 217 tourists and seven crew members. The Russian authorities insist that it was a terrorist attack, while the Egyptian investigations into the incident remain ongoing.

Since the Russian authorities believe that the accident occurred as a result of a terrorist act, Moscow still prohibits flights to and from Sharm el-Sheikh airport, until it makes sure that the airport follows all required security measures.

As controversy began over the Sinai wall since constructions started in February 2019, Mahmoud al-Soulia, president of Sharm el-Sheikh, told the press that the wall does not only serve as a means to maintain security, but rather to prevent camels and sheep from roaming in the city, especially on the road leading to Naama Bay, where they cause many accidents and exhibit an “uncivilized appearance.”

Soulia had also noted that the fence works to repel plastic debris and papers that fly toward the beaches due to the heavy winds in Sinai, explaining that such debris can harm tourists and pollutes the beaches as well.

Although the wire fence project began in 2019, the idea dates back to 2005, when some Egyptian and Arab newspapers had quoted anonymous security sources as saying that Egypt was considering building a security wall to protect Sharm el-Sheikh from terrorist attacks, especially after the series of bomb attacks on July 23, 2005, that resulted in the death of 88 people.

However, it seems that the state had backed away from the wall project with the decline of terrorist operations and the increasing fears of residents and tourists that a wall would deform the city. Many social media activists have voiced these same concerns after Fouda announced that the wire fencing was completed.

Meanwhile, a worker who has been employed at a hotel in Sharm el-Sheikh since 2004, told Al-Monitor that the wall the state intended to build in 2005 would have blocked the view of mountains and landscapes surrounding Sharm el-Sheikh resorts, but the current wall is completely different because it is a wire fence that does not block or ruin anything. “The gates that were designed for this fence took into account the standards of disciplined design to add an artistic glimpse of the city other than the splendor of the mountains and deserts that clearly appear from behind the wall," he noted.