As Egypt officially inaugurates an imposing mosque in the resort town of Sharm el-Sheikh in the southern Sinai, officials are hoping it can lure tourists back to the region. 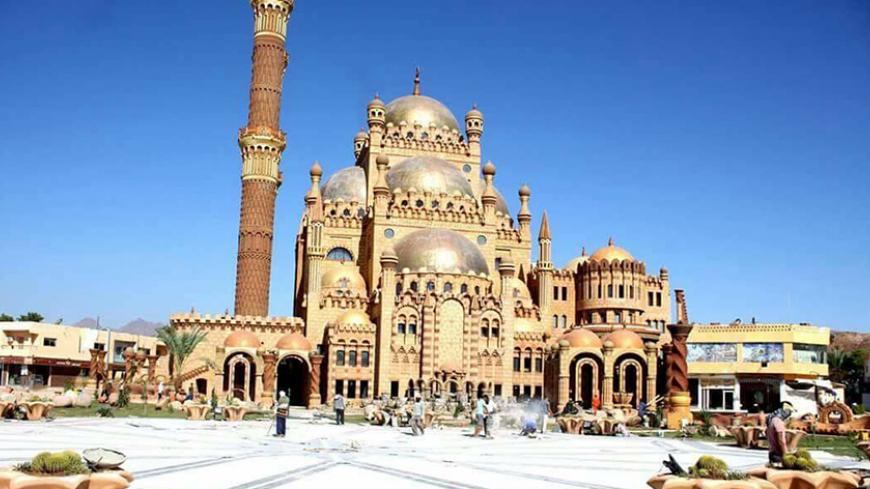 The new Al-Sahaba Mosque in the Red Sea resort city of Sharm el-Sheikh has now been completed and is open to the public. Posted Nov. 2, 2016. - Facebook/Sameh Al-hendawy

The day of March 24, 2017, is etched into Egyptian architectural history with the inauguration of Al-Sahaba Mosque in the Red Sea resort city of Sharm el-Sheikh. The mosque, whose name refers to the companions of the Prophet Muhammad, is one of the most important Islamic structures built in the country in the 21st century.

Al-Sahaba Mosque was built combining a pattern of different styles — Fatimid, Mamluk, Ottoman and canonical — to send a message that the Sinai Peninsula, which was once the cradle of religions, is still a place of tolerance and love.

"The aim of mixing different cultures and styles in one structure is to create a kind of interreligious harmony," architect Fouad Tawfik, who designed the mosque, told Al-Monitor.

The first stage in the construction of the mosque was based on donations collected by a charity nongovernmental organization in Sharm el-Sheikh called Al-Moustafa. The foundation stone was laid in October 2010, but work stopped during the January 25 Revolution. The work resumed in April 2011 and was suspended in 2015 due to a lack of donations. Chance played a role in expediting the completion of this magnificent structure when President Abdel Fattah al-Sisi was in Sharm el-Sheikh to preside over the Egypt Economic Development Conference that was attended by over 2,000 delegates from 112 different countries.

The president admired the building and ordered the armed forces engineering body to handle the last phase of associated costs, which amounted to around 15 million Egyptian pounds ($833,000 at the current exchange rate).

Al-Sahaba Mosque is located in the Old Market, a tourist area in Sharm el-Sheikh.

The main dome of the mosque, which is roughly 35 meters (114 feet) high, is bordered by two minarets, each 70 meters (229 feet) in height. The mosque occupies an area of 3,000 square meters (32,291 square feet) and consists of two floors — the first floor for men, and the upper floor for female worshipers with a separate entrance.

"The upper floor also contains a library that houses dozens of books on Islamic teachings, translated into many foreign languages. Annexed to the mosque is a culture center where conferences and debates can be held," Tawfik added.

The mosque is surrounded by vast grounds with a large fountain in front. As the mosque was being built, the nearby Old Market underwent a renovation; its floors were polished, and several new shops and cafes were added.

Visitors can spend sunset strolling the winding paths of the Old Market, also known as Old Town. The air fills with the smell of traditional shisha pipes, musky perfume and grilled meat coming from cheap, lively restaurants. There are also souvenirs, jewelry and engraved woodwork available in the market shops.

Sharm el-Sheikh has suffered from a decline in tourists over the past year after a Russian passenger plane was downed in October 2015.

The Russian passenger plane incident was followed by the banning of a number of countries' flights to the resort town due to security concerns.

Britain, a major source of tourists for the country, has yet to lift its ban. However, the UK travel company Thomas Cook announced in March it has a number of flights planned to the Red Sea resort for November 2017.

Furthermore, Hesham el-Demeiry, the head of Egypt’s Tourism Promotion Authority, recently announced that one of the largest Italian travel companies is organizing four weekly flights from the cities of Naples and Bari to Sharm el-Sheikh. He said that these trips, organized by Italian travel companies, will include around 180 tourists per flight, amounting to a total of 2,800 Italian tourists per month.

In a bid to catch the world's eyes regarding the safety of Sharm el-Sheikh, the government held a number of international events there. In February 2016, for example, the International Conference on Renewable Energy, where experts from all over the world disseminated the latest cutting-edge technologies in the renewable energy field, took place in the resort town.

Also, the first ever Sharm el-Sheikh Arab and European Film Festival was held in March and was attended by a number of foreign and Arab actors and directors.

In the same month, an international tourism and physiotherapy conference was held in this resort town, with the participation of dozens of travel agents and renowned physiotherapists from the Arab world, Western Europe, the United States and Canada.

The completion of the structure of Al-Sahaba Mosque is yet another milestone event in the town.

Parliament member Amr Sedky, a tycoon in the tourism industry, said that this newly opened mosque has another mission rather than being only a well-designed structure added to the touristic sites of Sharm el-Sheikh.

"The imams of this mosque interpret the Friday sermons in English and French if there are foreigners near the mosque. This is a unique experience in the Egyptian mosques," Sedky told Al-Monitor.

He said that the imams, who are appointed by the Ministry of Endowments, answer the tourists' questions about Islamic teachings and "they correct the wrong perceptions that IS [the Islamic State] leaves in people's minds about Islam."

"This is a great importance of the mosque. It is a real method in fighting Islamophobia."