The Egyptian Ministry of Awqaf is teaching imams and preachers foreign languages in order for them to deliver Friday sermons in French and English and spread moderate teachings of Islam in tourist areas. 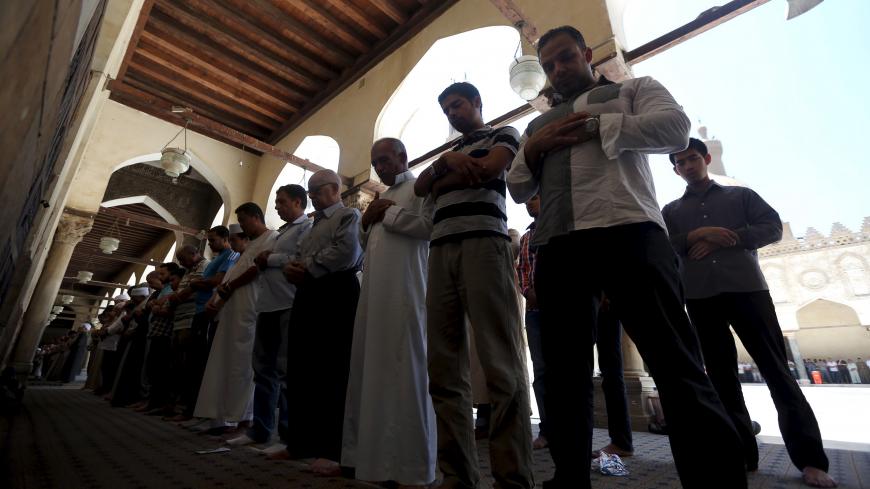 CAIRO — Egypt’s Minister of Awqaf Mohamed Mokhtar Jumaa announced June 24 a reward of 60,000 Egyptian pounds ($3,355) for those who pass the foreign-language program exam organized by the Egyptian Ministry of Awqaf. This comes in the framework of the ministry’s efforts to expand French and English teaching programs targeting mosque preachers.

Under the ministry’s language program, imams and preachers attend as many sessions as their assessment exam results require. These sessions range between two weeks and a year depending on the preachers’ level. And the courses are given by language and translation professors from Al-Azhar University. Once the sessions are over, the ministry selects those with the highest grades and sends them to deliver sermons in French and English in tourist areas such as South Sinai governorate, where the city of Sharm el-Sheikh is located, and the Red Sea governorate, where the city of Hurghada is located.

The Ministry of Awqaf said June 9 that 22 imams had been selected to deliver sermons in English and French in cities and governorates that have major tourism.

In order for tourists to attend the Friday sermon and learn about the moderate and tolerant teachings of Islam, the South Sinai Awqaf Department has allocated a changing room for tourists in the Sahaba Mosque, the largest mosque in Sharm el-Sheikh.

Egyptian newspapers such as Albawabh News and Sada El Balad praised the ministry’s plan, as it allows tourists who listen to such sermons to learn about and spread moderate Islamic teachings in their own countries.

The newspapers that praised the experiment said attempts aimed at spreading such Islamic thought and teachings through foreign languages help bolster the image of Islam and confront what is known in Western societies as “Islamophobia” due to the spread of terrorism across the world by extremist Islamic organizations such as the Islamic State (IS) and al-Qaeda.

The appointment of foreign-language-speaking preachers in governorates that get a lot of tourists is an extension of the Ministry of Awqaf's policy to spread a unified foreign-language Friday sermon in Egyptian mosques through the official website of the ministry. Imams currently deliver unified sermons in Arabic, English and French across Egypt.

Sermons have been condensed so as to be delivered in the three languages in one hour only.

Momen Sobhi, the imam of the Sahaba mosque in Sharm el-Sheikh, told Al-Monitor, “We started delivering the Friday sermon in English and French in March 2017, just as the Ministry of Awqaf inaugurated the Sahaba Mosque. The sermon is now initially preached in Arabic, then in English and French. We gradually started to implement the system and sent more preachers who are fluent in foreign languages to several mosques around Sharm el-Sheikh. The imams of the Sharm el-Sheikh and Hurghada mosques speak English, and some of them speak French as well.”

He stressed that the experiment will gradually help change the Western perception of Islam and Muslims and show Westerners that Muslims are people of peace, not war and terrorism. This is especially true because the plan coincided with the efforts of tourism companies and the Ministry of Tourism to turn the Sahaba mosque, which has a distinguished architecture characterized by a number of decorated domes and minarets, into an attraction where tourists can take pictures.

Sobhi added that the efforts of the Ministry of Awqaf have not been limited to foreign-language sermons alone. During the celebration of the birth of the Prophet Muhammad in November 2017, the ministry organized around mosques several artistic events that included religious songs, Sufi whirling and the distribution of sweets. Many newspapers, he said, reported the influx of tourists who came to attend this celebration proves Islam’s respect for the arts.

Abdel Motleb Abdel Hamid, a professor of public relations at the Sadat Academy for Administrative Sciences, praised the Ministry of Awqaf’s plan in an interview with Al-Monitor. “The most sincere activities that can change Western societies’ perception of Islamic societies are the activities that are naturally and spontaneously practiced by Muslims,” he said.

While these, he added, reflect Muslim refinement, the Friday sermons affirm the tolerance of Islam and come to respond to extremist fatwas and acts.

“Allowing tourists to put on decent clothes and enter the mosque during the Friday sermons also conveys a positive image of Islam. It shows tourists that had Islam been really calling for the killing of non-Muslims, then tourists would not have been allowed in mosques. This also allows tourists to convey a positive image of Islam and Muslims to their families and society as a whole. What’s more, the artistic activities organized around mosques convey the true spirit of Islam and help tourists associate Islam with the arts,” Abdel Hamid added.

In contrast, Mohamed El-Sakhawy, a marketing consultant who worked for some of the largest tourism agencies in Egypt such as Travco Travel Company of Egypt, dismissed the efforts of the Ministry of Awqaf as useless.

He told Al-Monitor, “Tourists do not care about whether or not Muslims are people of peace. Tourists look for secure, clean and regulated countries. And Egypt lags behind in this area. This has nothing to do with Islam. The evidence is the booming tourism sector in Turkey, Malaysia, Indonesia and Morocco, all of which are Muslim countries.”

Sakhawy continued, “The efforts of the Ministry of Awqaf will not be of any benefit to the Egyptian tourism sector, even if their mere purpose was to improve the image of Islam. This is not an effort that the Egyptian state should bear alone but jointly with all the countries of the Organization of Islamic Cooperation and all the Muslims residing in Western societies. The state should not focus on activities that improve the image of Islam but on ones that promote tourism and establish security.”