Egypt is now publishing Friday sermons in English, but is anyone reading them?

The Egyptian Ministry of Awqaf has recently launched an English version of its official Friday sermon, although accessing it might be impossible for those who don’t read Arabic. 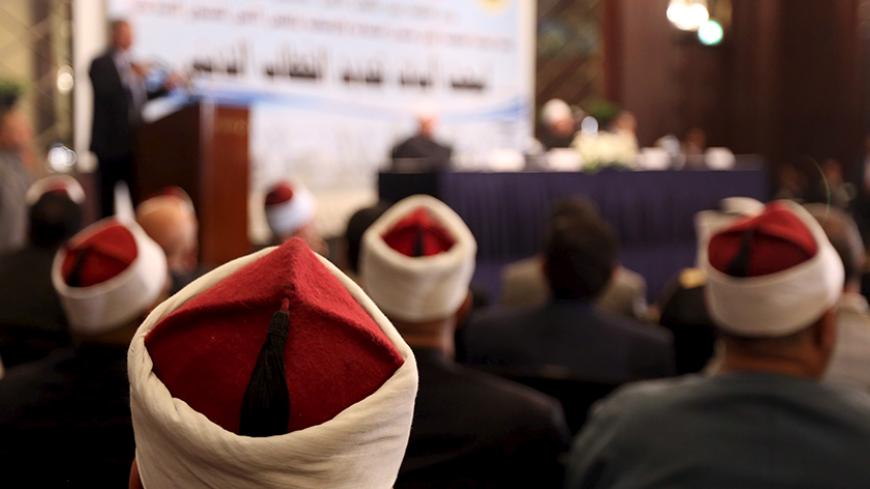 Muslim scholars attend a conference held by the Ministry of Awqaf at the headquarters in Cairo, May 25, 2015. - REUTERS/Mohamed Abd El Ghany

CAIRO — The Egyptian Ministry of Awqaf (Religious Endowments) announced Nov. 2 its intention to publish the unified Friday sermon it prepares each week on the ministry’s website, in a bid to “convey moderate Islamic discourse to the whole world in various languages.” While the ministry has hinted at future plans to translate into languages other than English, the exact details have yet to be announced.

The Ministry of Awqaf decided in January 2014 to unify the Friday sermon in all Egyptian mosques, vowing to take over the administration of any mosque that violated the decision and strayed from the set sermon.

The ministry published its first English sermon on Nov. 6, followed by subsequent translations for Nov. 13 and Nov. 20. However, the declared goal behind the publication of the sermon in English — making it accessible to “the whole world” — isn't being accomplished due to some flaws in how the English version is published.

The Ministry of Awqaf itself is responsible for some those flaws, as its website is designed in Arabic and has no English version. This makes it nearly impossible for those who do not read Arabic to find the published sermon, since all instructions leading to the English version are in Arabic.

Mohammad Aziz, one of the founders of 3rd i Studios, a website design and e-marketing company, spoke to Al-Monitor about the importance of proper website design when marketing content to audiences in multiple languages. He said that when non-Arabic speakers are trying to navigate an Arabic website, Google Translate may be the only option available to them. However, this “turns out to be useless” in the case of the ministry’s website, given the poor quality of Google's translation and the fact that one must navigate through several pages to arrive at the English copy of the sermon.

“Having an English version of the website is not enough," Aziz said. "The page must also be publicized [to English speakers], similarly to the English page of the Egyptian Dar al-Iftaa.” The latter has nearly 150,000 followers on its Facebook page.

Another flaw in publicizing the English version lies in the content of the sermon itself, which often fails to address current events that would be of interest to a global audience. On Nov. 6, when the first English sermon was published, the downing of the Russian airplane that took place on Oct. 31 was recent, and Wilayat Sinai (the Islamic State’s branch in the Sinai peninsula) had claimed responsibility for the attack. The sermon, however, made no mention of the incident despite its serious implications for Egyptian national security and Egyptian-Russian relations.

What’s more, the Ministry of Awqaf’s later sermons made no mention of the terrorist attacks that took place in Paris on Nov. 13, despite the fact that French mosques delivered a unified sermon on Nov. 20 to highlight Islam's rejection of terrorism and crimes committed by IS. This unified anti-terrorism sermon was set to be delivered in “most American and European mosques after Islamic leaders on the three continents signed a religious work agreement to unify the Friday sermon of Nov. 20,” as per a statement issued on Nov. 19 by Mohamed Bechari, secretary-general of the Islamic European Conference (IEC) and chairman of the National Federation of Muslims in France.

For his part, Abdel Fattah Idris, head of the Comparative Jurisprudence Department at Al-Azhar University, told Al-Monitor, “The Friday sermon must deal with the problems that people are grappling with, as the Prophet Muhammad did, and the biggest problem currently facing Muslims is terrorism. Just like other religions, Muslims are threatened and frightened by terrorism, which is distorting their image and tarnishing the image of Islam in the world as all of the [terrorist] organizations are using slogans of religion and Jihad [in an attempt to justify their actions].”

Until the Ministry of Awqaf focuses the unified sermon on issues that concern a wider audience — in addition to making the website accessible to English speakers — its goal of presenting moderate Islamic discourse to the world is not likely to be achieved. The ministry should work to publicize its English content and coordinate with Islamic leaders and institutions abroad to make translating the sermon a worthwhile venture.