Israelis are reacting with hatred and racism to the current spate of violence, ignoring the destructive ramifications of the endless cycle of occupation, humiliation, hatred and violence on their own security. 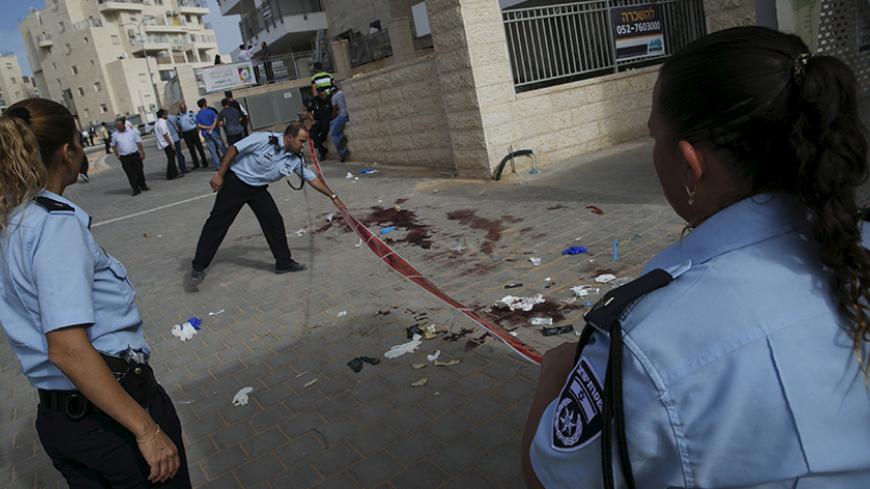 Israeli police cordon off the area of a stabbing in the town of Beit Shemesh after Israeli police shot two Palestinians who stabbed a resident of the town near Jerusalem, Oct. 22, 2015. - REUTERS/Baz Ratner

There are those who describe the events of the past few weeks as a “wave of violence” sweeping Israel. Channel 10 prefers “wave of terror.” Some consider the terror attacks throughout October a third intifada. No one knows how long it will continue, how many names will be added to the list of those killed in the Israeli-Palestinian conflict and how it will end. But one thing is already clear: The forces of darkness have overcome the forces of good. Everyone is losing in the war being waged these days on Israeli city streets, except those who love land and hate people, false prophets and mindless small-time politicos.

The smallest loss is the damage to the Israeli economy. In an interview with Al-Monitor's Mazal Mualem, the president of the Israel Manufacturers Association, Shraga Brosh, described the impact of terrorism on the economy as "very significant." Economists foresee a significant drop in growth and GNP and an increase in unemployment. The price is being paid by Jewish merchants left without an income now that the stabbing attacks have emptied the malls of shoppers. The price is being paid by Palestinian citizens of Israel who are being asked to stay away from their work at schools, where they are suddenly perceived as a threat. The price is being paid by Palestinian laborers who are staying away from their places of employment at the hotels and construction sites of west Jerusalem for fear of being targeted by Jewish thugs.

Another loss is that of security. Absent diplomatic tools to douse the flames and restore a sense of personal safety to the Jewish public, the government has to resort to the usual measures: more police, more soldiers, more roadblocks, more speeches. Aside from the last, all require the allocation of additional funding and cuts in training by the various defense forces. That, in turn, means a decline in the combat capability and readiness of the Israel Defense Forces, burnout for the border and national police forces, increased criminal activity and less law enforcement in general. By the way, anyone still remember the Iranian threat?

The third loser is the rule of law in Israel. The current wave of violence is characterized by a new phenomenon: shooting to kill at Palestinian assailants or at people suspected of being terrorists, even when there’s no need for the sake of self-defense. On the other hand, in all the incidents involving suspected Jewish perpetrators, not a single shot was fired. While trigger-happy conduct should be avoided under all circumstances, the number of Jewish assailants who were arrested is negligible.

“No one disputes the serious nature of the events of recent days, nor the need to protect the public against stabbing and other attacks,” nine human rights organizations wrote in an Oct. 14 statement. “But it seems that in too many cases, instead of acting in a manner fitting the nature of the event, policemen and soldiers are quick to shoot to kill.” To this should be added "Arabs."

The statement went on to say that backing by public figures essentially “endorses the killing [of] Palestinians in the territories and in Israel.” These words refer to Internal Security Minister Gilad Erdan, who said, “Every terrorist should know he will not survive the attack he is about to carry out,” and to Knesset member Yair Lapid, who said, “Anyone taking out a knife or screwdriver — should be shot with intent to kill.” They, of course, joined the chorus of those condemning the Oct. 18 killing of an Eritrean asylum seeker at the central bus station in Beersheba.

The chief rabbi of the town of Safed, Rabbi Shmuel Eliyahu, was especially impressive when he told followers at his weekly lesson last week, “I heard that in cases like this, and in other cases, policemen were afraid to shoot the male or female terrorist out of compassion and pity. I don’t understand this. What’s the meaning of not shooting a terrorist? Empty your magazine at her! That’s what needs to be done. … A policeman who kills a terrorist should get a bouquet of flowers, gifts and money.” This public servant, who also serves as the head of the rabbinical council of the national emergency medical service Magen David Adom, claimed that Jewish law permits medical staff to kill wounded terrorists. “If they cannot be killed,” he added, “make it so that in the end they will die. Feed them spoiled food, so that they get a stomach upset and end up dying. That’s what one should learn at MDA.”

This is where the greatest loss lies for the two peoples who have each other by the throat. On the 20th anniversary of the assassination of Prime Minister Yitzhak Rabin, the blood pact between the Palestinian and the Israeli zealots, the ones responsible for the suicide attacks and for raising Rabin's assassin, Yigal Amir, is emerging again. The roller coaster is once again speeding insanely along the path of occupation and terror. When a girl from Tel Aviv hears on the news about a 13-year-old boy who stabbed an Israeli boy his same age, it is hard to explain to her that not everyone is like that, that the Palestinians are human beings just like her, and that the vast majority of them want freedom and respect — that Palestinian parents also want for their little girl to be a good student and dream of taking her one day on a trip abroad.

Professor Sami Adwan of Bethlehem University, who has for years studied the issue of incitement in Palestinian textbooks, told me once that the humiliation of a mother at an Israeli checkpoint impacts a Palestinian child more than thousands of words and pictures. According to him, the injustice of the occupation, and not incitement, is what turns children into terrorists. When Prime Minister Benjamin Netanyahu senses that his “Abbas' incitement” ammunition is running out and he might lose in his favorite game — the zero-sum game — he pulls out the doomsday weapon: the Holocaust.

This time, he placed Palestinian leader Haj Amin al-Husseini one step above Hitler. In an Oct. 20 speech before the World Zionist Congress, the son of historian Benzion Netanyahu claimed that Husseini was the one who convinced Hitler to send the Jews to the crematoria. Even Defense Minister Moshe Ya'alon found it appropriate to publicly distance himself from this nonsense, from words that should make every Jew shudder. But for now, Netanyahu is celebrating the victory of hatred, fear, lies and despair over humanity, courage, truth and hope. Evidence of this can be found in the 20,000 likes for the message a female soldier named Eden Levi scrawled on her palm and posted on Facebook, saying, “Hating Arabs is not racism, it’s values,” and her mother’s reaction: “Proud of you, my girl.” And maybe this is the bad place one must reach before things can start to get better, so that more young men and women write on their palms in reaction, as some already have, that “Hatred is not a value, racism is not the way.”