US to arm Syrian Kurds, rebel groups fighting IS

The Pentagon will pause its beleaguered Syria train and equip program to instead provide arms and air support to Syrian Kurdish and Arab rebel groups already fighting the Islamic State. 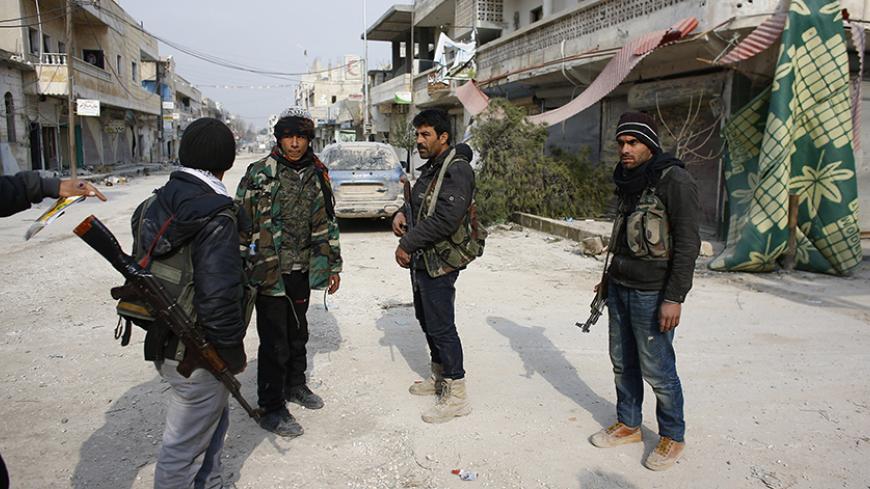 Fighters of the Kurdish People's Protection Units patrol in the streets of the northern Syrian town of Kobani, Jan. 28, 2015. - REUTERS/Osman Orsal

The United States will supply arms, equipment and air support to Syrian Arab and Kurdish groups already fighting the so-called Islamic State (IS) on the ground in Syria, the White House and Pentagon announced Oct. 9.

The decision to refocus the beleaguered, $500 million Pentagon program from training and equipping a new force to fight IS in Syria to “equip and enable” rebel groups already fighting on the ground came after an interagency review of the train and equip program, US officials said.

“A key part of our strategy is to try to work with capable, indigenous forces on the ground … to provide them with equipment to make them more effective, in combination with our air strikes,” Undersecretary of Defense for Policy Christine Wormuth told journalists on a call on the new strategy Oct. 9.

The redesigned program is modeled in part on the successful experience supporting Syrian Kurdish forces that were able to retake the Syrian Kurdish-Turkish border town of Kobani back from IS last year, US officials said.

“We supported the counter-[IS] fighters in Kobani, allowing them to take back a key border crossing and press deeper into Syrian territory controlled by [IS],” Pentagon spokesman Peter Cook said in a statement Oct. 9.

“Building on that progress, Secretary of Defense Ash Carter is now directing the Department of Defense to provide equipment packages and weapons to a select group of vetted leaders and their units so that over time they can make a concerted push into territory still controlled by [IS],” Cook said. “We will monitor the progress these groups make and provide them with air support as they take the fight to [IS].”

“We have worked with some of these groups, we know who they are, we have been talking with their leaders, [we will] put them through rigorous vetting process … and give them basic equipment packages to distribute to their fighting force to enable their offensive operations,” Wormuth said.

“As we start doing that … we will also look for other groups fighting [IS] where we can use this same kind of approach,” Wormuth said. “That is the heart of it. We have seen some of these groups be very effective particularly in the northeast [of Syria]. We want to help them be more effective.”

The new “equip and enable” strategy will vet commanders of the Syrian rebel groups the Pentagon will equip, but not the fighters, and will not require taking fighters off the battlefield and inserting them into Syria, seen as a major deficiency of the old program.

It may also be more attractive to rebel groups seeking both to fight IS and challenge Syrian President Bashar al-Assad. The congressional authorization for the train and equip program required that the US-trained rebels pledge only to fight IS and was unpopular with many rebels for that reason, Syrian opposition sources say.

The new program “is very positive, because the old program was inefficient,” Bassam Barabandi, a former Syrian diplomat who now opposes the Assad regime, told Al-Monitor Oct. 9. “This program is very clear: The training is only for leaders, not for all the group, so it is much easier for including more people in the program.”

“It sounds that they will move very fast on it,” Barabandi said.

White House officials denounced the week-old Russian military intervention in Syria for targeting moderate opponents of the Assad regime who have been battling IS, and they warned that Russia’s actions risk pushing further away a potential political resolution of the four-year-old Syrian conflict. They also said US President Barack Obama has not changed his position on whether Assad could ever lead a united Syria.

The Russian military action is “extraordinarily counterproductive insofar as Russia is targeting opponents of the Assad regime who are not extremists,” the National Security Council’s Ben Rhodes told journalists on the Oct. 9 Syria call. It is “undermining a political resolution and risks getting themselves into a quagmire.”

“One reason to provide support to a variety of opposition groups is clearly to fight [IS],” Rhodes said. “Another reason is to ensure that there are credible opposition factions in the country that can be part of a transition that brings together different constituencies.”

Obama “is not in any way looking at revisiting Assad’s position in Syria,” Rhodes said. “Because frankly the people who rejected Assad are the Syrian people. … [Assad’s staying is] a recipe for more conflict. I don’t think it will work.”

Speaking in an interview with CBS’s 60 Minutes to air Oct. 11, Obama said he saw Russian President Vladimir Putin’s decision to intervene in Syria as a sign of weakness.

“Mr. Putin now is devoting his own troops, his own military, just to barely hold together by a thread his sole ally [Assad]” in the Middle East, Obama said, according to a partial transcript provided by 60 Minutes. “If you think that running your economy into the ground and having to send troops in, in order to prop up your only ally is leadership, then we've got a different definition of leadership.”

Barabandi said a new dynamic had emerged in recent days since the Russian intervention in support of the Syrian army began, in which moderate Free Syrian Army forces were seen having more demonstrated success over Islamist rebel factions setting back Russian-backed Syrian army forces.

“Something very important has been happening in Syria the last three days,” Barabandi said, saying Free Syrian Army-affiliated rebels had taken out over 20 Syrian army tanks and some four or five regime helicopters.

“For now, the momentum in Syria is that the FSA is representing the Syrians, not the Islamists,” Barabandi said. “The new [Pentagon] program, the new shape … can reverse the situation very quickly and let the moderates take the lead” over Islamist rebel factions.