Who are the real targets of Russia’s Syria strikes? 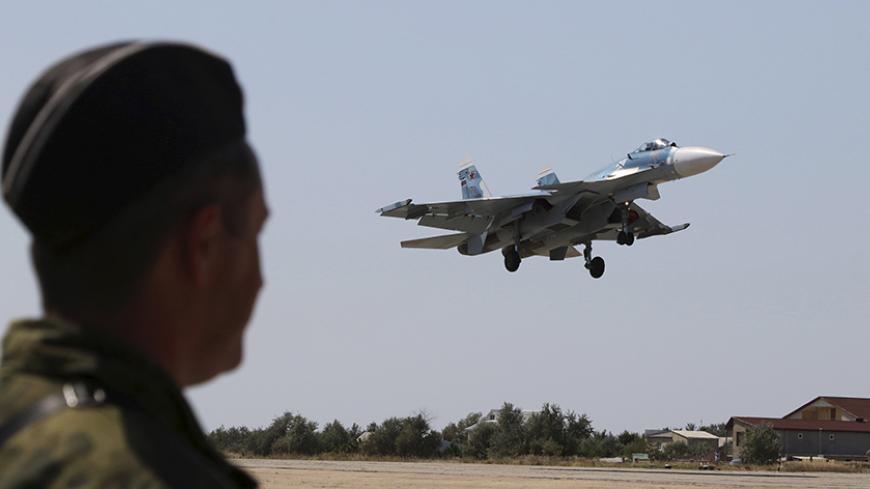 A Russian Su-33 naval fighter plane flies during a drill at the Nitka training complex in the village of Novofedorovka, west of the Crimean city of Simferopol, Aug. 27, 2015. - REUTERS/Pavel Rebrov

ALEPPO, Syria — Russian troops launched military operations in Syria a few hours after the Federation Council gave approval to President Vladimir Putin Sept. 30 to use the Armed Forces of the Russian Federation outside Russian territory. Although Moscow claims these operations are to provide the Syrian regime with air support against the Islamic State (IS), their primary targets in fact have been Syrian opposition forces, in particular the Free Syrian Army (FSA). Russia's actions thus far appear to confirm Western concerns about whether Russian forces were dispatched to fight IS or the armed opposition.

On Sept. 30, the Russian Defense Ministry claimed through its spokesperson, Maj. Gen. Igor Konashenkov, that Russian warplanes had carried out some 20 strikes against eight IS targets, but failed to provide details of the target locations. On the ground, however, it was evident that the Russians had hit regions controlled by the opposition in Talbiseh and Rastan in the Homs countryside and al-Lataminah in the Hama countryside, and other areas.

Majid Shaaban, a media activist living in Talbiseh, stressed to Al-Monitor via Skype that Russian aircraft had bombed the town Sept. 30, killing 18 civilians. He stated, “Reconnaissance aircraft flew first, and soon after that, two fighter aircraft simultaneously bombed the town from a high altitude, launching several missiles at once. … Fighter aircraft had never launched such a strike. Their sound and the extent of destruction they created were unusual and different from the strikes of the regime.”

The United States charged that the Sept. 30 strikes had not targeted IS. On the same day, French Defense Minister Jean-Yves Le Drian asserted that while Russian troops had hit Syria, "curiously, they didn't hit [IS].”

Any observer of the Syrian situation knows that with the exception of the towns of Kefraya and al-Foua, which are held by the regime, Idlib province is under the control of opposition forces. They expelled IS from the province in January 2014.

Regardless, the Russian Defense Ministry insisted on Oct. 1 that its aircraft had bombed sites affiliated with IS in Idlib. Meanwhile, online video shows that the Russian strikes had targeted the Suqour al-Jabel Brigade, affiliated with the FSA. This was also confirmed by an Oct. 1 statement issued by the Suqour al-Jabel Brigade clarifying that the Russian attacks had targeted its headquarters near the village of Has in Jabal al-Zawiya in the Idlib countryside.

Russian aircraft also hit other factions of the FSA, including the Asefat al-Hazm Squad and the 1st Coastal Squad in the Latakia countryside. Moreover, on Sept. 30, the Homs Liberation Movement announced the death of one of its leaders, 1st Lt. Iyad al-Dik, from a Russian strike in the northern countryside of Homs. In addition, Aladdin Saleh, media spokesperson for Tajammu al-Ezza, an FSA affiliate, told Al-Monitor, “The Russian aircraft bombed the headquarters of the al-Ezza Gathering Sept. 30 near al-Lataminah in Hama. The Russian strike caused extensive material damage and led to numerous casualties from among our fighters.”

Moscow is apparently trying to use IS to gain international support for its intervention in Syria while actually targeting IS’ main enemies, that is, the opposition forces, including the FSA, described as “moderates” and backed by the United States. Why is Moscow targeting the opposition instead of IS?

The Russian forces were sent to Syria to support Bashar al-Assad's regime, and that requires fighting the opposition forces, which are supported by several countries, including Qatar, Saudi Arabia and the United States, among others. Meanwhile, the US-led international coalition continues to assume the mission of fighting IS, the Assad regime's other enemy.

For the moment, the Syrian regime appears to prefer to fight the opposition forces growing in strength rather than IS. Moreover, the regime has proven itself willing to provide support to IS when the extremist group has faced attack by opposition forces. This was the case in the northern countryside of Aleppo in June 2015, when the regime provided IS air support by bombing rebel-held villages and sparing those under the control of IS. The battle ended with IS gaining control of the town of Soran and five other villages.

The Assad regime is extremely concerned by the opposition's progress in Idlib, which has put them at the doorstep of the regime’s stronghold on the Syrian coast. In addition, the opposition, represented by Jaish al-Islam (Army of Islam), launched an attack on the outskirts of Damascus Sept. 9 and took control of the strategic Tel Kurdi area and the Homs-Damascus highway.

The Kremlin asserted on Oct. 1 that the Russian strikes are to help regime forces at their weak points. Most of the strikes so far have been concentrated in the countryside of Homs, Hama, Latakia and Idlib, near the Syrian coast where Russian military bases are located. Despite its claims of confronting IS, Moscow is securing the Syrian coast from attack by opposition forces, which are almost there.