Will Saudi Arabia give up hajj management?

The harsh criticism by various Muslim countries and other parties of Saudi Arabia over the most recent hajj tragedy may prompt the kingdom to take drastic steps to protect its reputation. 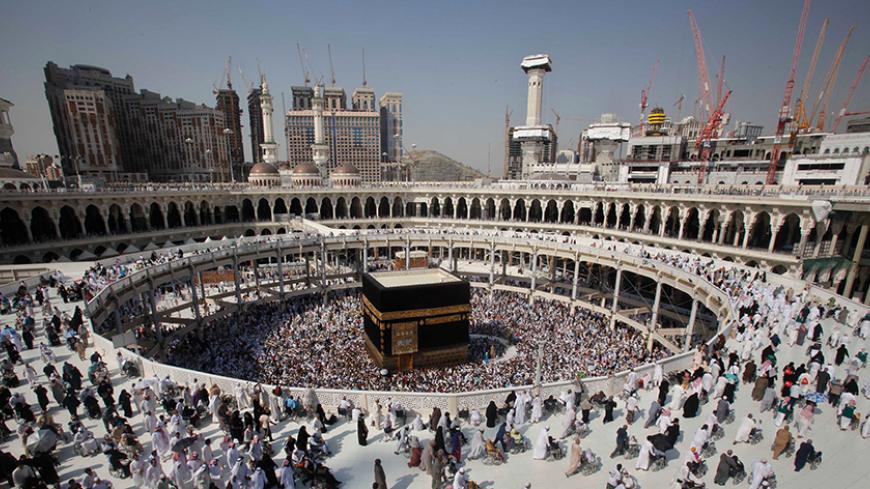 Muslim pilgrims circle the Kaaba at the Grand Mosque during the annual hajj pilgrimage, in the holy city of Mecca, Oct. 17, 2013. - REUTERS/Ibraheem Abu Mustafa

The recent incidents in Mecca have revived, in the various parts of the Muslim world, previous demands that management of the hajj be transferred from the Saudi government to a joint Muslim administration. The issue has added a new dimension to the sectarian conflict between Saudi Arabia and its opponents, led by Iran.

The storms that hit Mecca on Sept. 12 caused a crane to collapse on the Grand Mosque, killing 107 people and leaving 230 injured of various nationalities. On Sept. 17, a major fire broke out at a hotel for pilgrims in Mecca, injuring two people and leading to the evacuation of 1,028 others. Most recently, a stampede killed 717 pilgrims and injured 863 others, according to the Saudi version of the story. Some countries whose nationals were among the victims, such as Indonesia and Pakistan, have said that the death toll from the stampede reached 1,036 people.

Many other deaths have occurred during hajj rituals.

Different countries have leveled various criticisms against Saudi Arabia for the mismanagement of the hajj rituals. Among them, Indonesia harshly criticized Saudi Arabia's treatment of the incident, lack of preparations and failure to take the measures needed to control the situation and reduce losses.

Yet the harshest criticism was leveled by Iran, Turkey and other Muslim parties. They focused on what they saw as Saudi Arabia’s incompetence in managing the hajj in general.

On Sept. 27, Iranian Supreme Leader Ayatollah Ali Khamenei described the incident as a tragedy that cannot be forgotten and said that the Muslim people should come up with serious solutions to resolve the hajj issues.

In a speech before the UN General Assembly on Sept. 28, Iranian President Hassan Rouhani focused on Saudi Arabia’s mismanagement of the hajj rituals, calling it the main reason behind the repeated bloody incidents.

Official Saudi statements on the incident have added fuel to fire. On Sept. 24, Hatem Hassan Qazi, spokesperson for the Ministry of Hajj Affairs, declared the stampede at Mina an act of God.

The criticism against Saudi Arabia has focused on the mismanagement of the hajj at two different levels. The first is poor overall management of the rituals, in terms of providing services (such as transportation), facilitating hajj events and ensuring the safety of pilgrims. The second is the imposition of the Wahhabi program on all Muslim sects, restricting them as they visit the holy places and shrines.

During its rule over the Muslim holy land and particularly since 1927, Saudi Arabia has continued to neglect hundreds of ancient and religious sites in various parts of Mecca, Medina and other Saudi cities. Some writers and journalists have described the Saudis as taking a "bulldozer to Islam’s history."

The Saudi police and Wahhabi clerics impose strict rules on visitors and pilgrims coming from different parts of the Muslim world, whose religious orientations are different from Wahhabism. For instance, visitors and pilgrims are not allowed to obtain blessings by kissing or touching the holy sites, including the Prophet Muhammad's tomb.

Under such circumstances, it is only natural that various political and religious parties are demanding that the management of the hajj be transferred from Saudi Arabia to a joint Muslim administration. Although such demands seem radical and unrealistic on the surface, they are putting genuine pressure on the Saudi government that could affect its management of the hajj rituals and Muslim holy sites.

If such incidents are repeated in the coming years, demands that hajj management be transferred to a joint Muslim body will grow even louder, making it hard for Saudi Arabia to oppose them. The Muslim countries taking part in the hajj have different ways of influencing and pressuring Saudi Arabia, including prohibiting travel for the hajj, which could have devastating consequences on the Saudi economy and its reputation in the international and Muslim arenas.