Since the deadly Mina incident, Iranian officials have been criticizing Saudi Arabia for its mismanagement of hajj affairs and its approach that seems focused on containing Muslim anger and avoiding a direct confrontation with Iran. 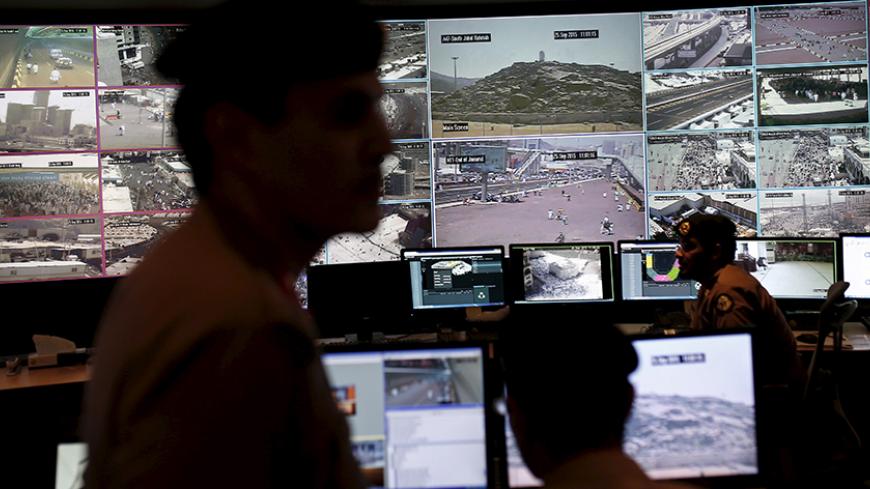 Saudi policemen look at security monitors showing footage from cameras set up around the holy places on the second day of Eid al-Adha in Mina near the holy city of Mecca, Sept. 25, 2015. - REUTERS/Ahmad Masood

Accusations of negligence and rumors of sabotage abound over who is responsible for the hajj stampede Sept. 23 that killed hundreds and injured nearly 1,000 in the Mina district of Mecca.

Iranian Supreme Leader Ali Khamenei promised a harsh and violent response to Saudi Arabia in the event that Iranian pilgrims were subjected to any abuse or disrespect during the hajj, or if the bodies of Iranian victims of the Mina disaster are not returned. He spoke Sept. 30 at the Naval Academy graduation ceremony in Noshahr.

Iranian President Hassan Rouhani also said he holds the Saudi government accountable. In his Sept. 27 speech before a gathering of Iranians residing in New York, he demanded Saudi officials provide answers to all the questions surrounding the Mina incident. The stampede claimed the lives of more than 700 pilgrims and injured more than 900 others of various nationalities on the first day of Eid al-Adha, as pilgrims headed to the Jamarat area to throw pebbles.

Ibrahim Raisi, Iran's prosecutor general, said in a Sept. 27 interview with Lebanese TV station Al-Mayadeen, “We will prosecute the house of Saud in international forums for the crime they committed against the pilgrims.”

Iran's escalating anger may seem justified at first glance, especially as the death toll of Iranians rises well above 400 as more victims succumb to their wounds.

However, senior Iranian officials also seem keen to involve the issue of Yemen in their speeches criticizing the Mina incident. Tehran is upset that Riyadh continues to target the Yemen Houthis, Iran's allies in the Arabian Peninsula. Hashemi Rafsanjani, chairman of the Expediency Discernment Council, said during the council’s Sept. 26 meeting, “In conjunction with the Mina disaster, we are witnessing the Saudi aircraft bombing of the oppressed Yemeni people.”

Ali Shamkhani, Iran's secretary-general of the Supreme National Security Council, said at a Sept. 29 special meeting about the Mina incident, “The Saudi regime had allocated all its capacities in terms of logistics and resources to [the war] in Yemen, which was a main reason behind the human tragedy in Mina.”

Had the Mina incident occurred during the reign of King Abdullah bin Abdul-Aziz Al Saud, Iran's anger would have been less intense and critical of the Saudi management and more keen to contain the crisis. Abdullah's royal court under Khaled Al-Tuwaijri’s leadership held policies that suited the Iranians and did not conflict with their interests in the region.

Tuwaijri exploited all of Riyadh’s financial, political and security capabilities to confront political Islam movements such as the Muslim Brotherhood and jihadists like the Sunni Islamic State (IS). Meanwhile, Hezbollah groups in the Gulf were busy smuggling and storing weapons in Gulf countries, and the Houthis were getting stronger and expanding in Yemen without constraints.

But currently, fiery statements and provocative threats are flying from political and religious figures in Tehran against the Saudi government, and rumors spread on social networking sites about Tehran’s alleged role in the events. For his part, former Iranian diplomat Farzad Farhnkian tweeted Oct. 2 that leaders from the Iranian Revolutionary Guard Corps were involved in a scheme to sabotage the holy sites.

Despite all these statements, Riyadh, which formed a committee Sept. 24 to investigate the causes of the incident, has not officially commented on the accusations.

Asked about rumors circulating on social media about the involvement of Iranian pilgrims in the Mina incident, a Saudi hajj affairs official told Al-Monitor on condition of anonymity that the Iranians do not pass up chances to sabotage during their pilgrimage, recalling the terror attempts during pilgrimage seasons in the mid-1980s. He added that the authorities are investigating members of the Iranian Hajj Mission to find out whether they were directly involved in the incident.

The Saudis seem to be trying to calm and absorb the Muslim anger and avoid direct confrontation with Tehran. During a Sept. 26 news conference on the sidelines of the 70th session of the UN General Assembly in New York, Saudi Foreign Minister Adel al-Jubeir commented on the Iranians holding Saudi authorities responsible for pilgrims' deaths, saying, “I assure you that this issue is not to be used in political games, and I hope that the Iranian officials will be more rational and sympathize with the victims of this tragedy.”

If the accusations against Iran are confirmed, some expect Saudi authorities to reveal details about the investigations and the scheme, as happened after the pilgrimage season of 1986-87, when Saudi security forces clashed with Iranian pilgrims. After those incidents, both countries withdrew their diplomatic ambassadors.

However, if these charges against Iran are not confirmed, then Riyadh, which is engaged in multiple confrontations — including an internal and external one against IS, and a military one in Yemen — will have to provide answers. It will need to provide convincing explanations for the Mina disaster, particularly to the Islamic world, and especially since this is not the first time this type of thing has happened.

Despite the methodological and personal differences among the Saudi opposition in London — between the Sunni wing (represented by Saad al-Faqih and Mohammad al-Massari) and the Shiite wing (represented by Fuad Ibrahim and Hamza al-Hassan) — the opposition has found themselves fighting from the same trench. Both opposition wings exploited the Mecca and Mina incidents to wage a harsh offensive against the regime in Saudi Arabia, calling into question its ability to manage the holy sites.

When Faqih said Sept. 28 that a security failure was the direct cause of the Mina incident, he suggested a new program to manage the hajj affairs.

Massari, a former physics professor at King Saud University in Riyadh, tweeted Sept. 25 that the Mina stampede was sparked by the presence of the princes’ convoys, based on a video of the hajj.

The Shiite wing of the Saudi opposition also held the Saudi government responsible for both incidents. Hassan tweeted Oct. 1 that he believes the Saudi authorities used gas and closed the exits. He also expressed his enthusiasm for the idea of ​placing the management of the Two Holy Mosques under the Organization of Islamic Cooperation, as promoted by the Iranians.