Rather than functioning as a platform for cooperation, the deadly stampede in Mina has only worsened the war of words between Iran and Saudi Arabia. 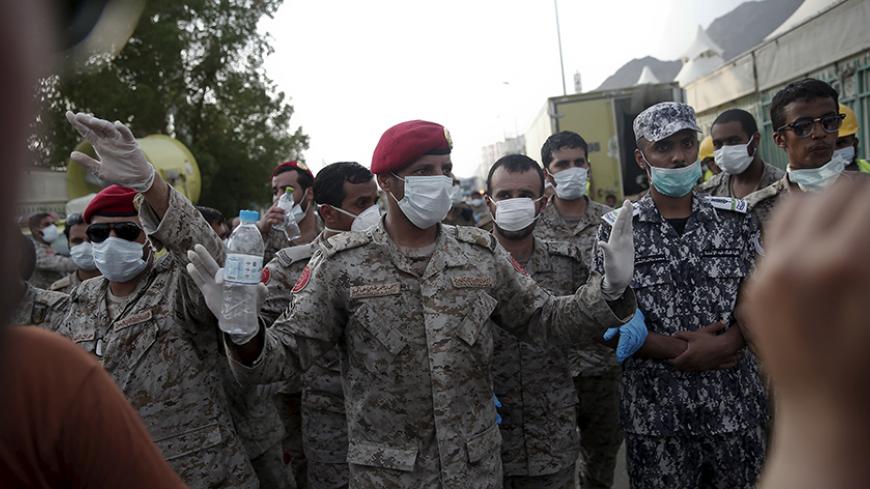 Saudi security forces block the way to an area where a stampede occurred at the camp city at Mina, near the holy city of Mecca, Sept. 24, 2015. - REUTERS/Ahmad Masood

The hajj season of 2015 will always be remembered — not just in Saudi Arabia, but in each and every country that lost pilgrims in one of the deadliest stampedes in the history of the annual pilgrimage to Islam’s holiest sites. There are images of the dead piled up under the sun in Mina and horrific footage of the worst moments where people are seen stuck in the middle of a sea of bodies, some suffocating and others making what appears to be an impossible effort to run for their lives.

These scenes bear a close resemblance to what the region is going through — the same struggle for life that can be seen from Iraq to Syria, Yemen, Bahrain, Egypt and many other countries. To make things more real, this latest tragedy took place in Saudi Arabia, and the most afflicted nation was Iran. These two countries are already fighting each other directly or via proxy in one of the deadliest wars in the history of the Middle East — a war that has taken the lives of tens of thousands of people.

Many have seen Iran’s reaction to the catastrophe in Mina as politicized. This occurred mainly after Tehran seized the opportunity to call for broader Islamic management of the hajj, accusing the Saudis of failure, and later when Iran’s supreme leader demanded an Islamic probe into what actually happened. The Saudi government’s death toll for the stampede has stopped at 769, while the Iranians alone say the number of dead among their ranks has climbed to 464. Separately, Nigeria has announced that 244 of its pilgrims are still missing, while 64 are confirmed dead. Egypt and Indonesia together have more than 132 killed, with many more missing. Pilgrims from several other nations also lost their lives in the stampede.

Some of these countries have issued official statements. Indonesia and Nigeria stressed the need for better action by the Saudis, while others, including Pakistan, have tried to keep their voices low, even as people’s voices grew louder.

In Pakistan, the government on Sept. 30 asked the Pakistan Electronic Media Regulatory Authority (PEMRA) to take notice of talk shows and broadcasts discussing the “Mina tragedy” and criticizing Saudi Arabia’s handling of the stampede and its aftermath. In a statement issued directly to senior managers of news outlets, PEMRA said, “Some channels are airing programs on the Mina accident and indirectly [accusing] Saudi Arabia of mismanagement. They need to be reminded that Article 19 of the Constitution restricts comments that may affect relations with friendly countries.”

In contrast, Nigeria’s hajj commission has asked the Saudi authorities to ensure that countries affected by the stampede play a role in investigating the incident, with the request echoed by many other clerics in the country.

Indonesia has sought to convey a message of discontent but steered clear of direct criticism. Indonesia’s religious affairs minister said in a statement Sept. 28 that Indonesians did not have free access to hospitals to search for injured Indonesians. Lukman Hakim Saifudin, Indonesia’s religious affairs minister, added, “The Saudi Arabian government has its own regulations, tradition, culture and procedures in dealing with such cases. This has not allowed us enough freedom in our effort to identify” the victims.

Algeria and Egypt, both Arab countries, have dealt with the issue in a less harsh manner, and so have other affected Arab states. “No party would seek to take advantage of the pilgrimage and pilgrims … in a controversial context that would divide rather than unite,” reads a statement issued by a group of Arab foreign ministers who met on the sidelines of the UN General Assembly in New York. It is clear that Arab countries as well as Islamic states that enjoy good ties with Saudi Arabia have sought to rid themselves from any connection with Iran’s outcry, which has been slammed by Riyadh as being politicized.

Indeed, Saudi media have highlighted tempered stances by organizations and clerics from around the Islamic world. London-based Asharq Al-Awsat reported that “Al-Azhar University, the world’s leading Sunni Muslim seat of learning, strongly denounced on Monday Iran’s ‘rash accusations’ of negligence on the part of Riyadh, arguing that jumping to conclusions before the findings of investigations were even released is completely ‘unacceptable’ and aims only to distort reality. ‘Claims of negligence are unacceptable and contradict the reality as seen by millions of people during the Hajj season every year,’ Abbas Shuman, Al-Azhar deputy head, told Asharq Al-Awsat.”

All in all, once again, what is unfolding before the world is yet another Saudi-Iranian confrontation. And once again, respective allies and friends are used to help make parallel messages clearer and stronger. The fact is that both the Iranians and the Saudis could on this occasion have used the tragedy of the stampede to change the course of their war. The blood splattered on Islam’s holiest sites was certainly worthy of a try. No such effort has been made.