Abbas promised a 'bombshell' but instead delivered a dud

Palestinian President Mahmoud Abbas promised that his UN General Assembly address would include a "bombshell," but eventually only declared that the Palestinian Authority is not committed to the Oslo Accord since Israel isn't either. 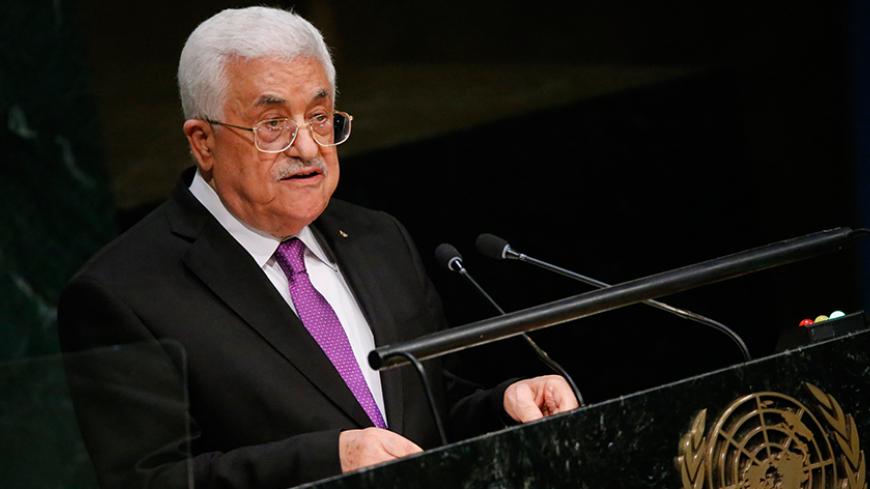 One of the more amusing yet accurate descriptions of the Sep. 30 General Assembly address by Palestinian President Mahmoud Abbas was written by my colleague, Mahmoud Daher, a former reporter for a Palestinian TV station and currently a human rights activist in the Gaza Strip. “The rocket of Mohammed Assaf, the singer from Arab Idol, was more powerful than Abbas’ bombshell,” he quipped on his Facebook page. This was, by and large, the sentiment of the Palestinians who eagerly awaited their president’s speech. Two weeks ago, in an interview with Al-Quds al-Arabi, Abbas promised to drop a bombshell during his UN address.

The term “bombshell” cannot be dismissed offhandedly, particularly when it comes to the highly-charged relationships between Israelis and Palestinians. That promise elicited a frenzy of rumors among the Palestinians and intrigued the Israelis. Palestinian Authority (PA) position holders, journalists, commentators and “mavens” with whom Al-Monitor talked after the Al-Quds al-Arabi interview were inclined to think that in his UN address Abbas would declare that he was stepping down. Others opined that given his frustration, he would announce the dismantling of the PA.

In the end, Abbas announced at the UN podium that since Israel, according to him, was not abiding by the Oslo Accord, he could not guarantee that the Palestinians would unilaterally uphold the agreement. Without setting a specific date or action plan, Abbas said, “We declare that as long as Israel refuses to commit to the agreements signed with us, which render us an authority without real powers, and as long as Israel refuses to cease settlement activities and to release the fourth group of Palestinian prisoners in accordance with our agreements, they leave us no choice but to insist that we will not remain the only ones committed to the implementation of these agreements.”

For those who may have forgotten the facts, here is a brief reminder. The Oslo accords were interim agreements that stipulated a precise schedule for the start of the talks about a permanent status arrangement (three years after the withdrawal) and the establishment of a Palestinian state.

What are Abbas’ options by not upholding the agreements? What is left of the Oslo Accord, whose violation could change world order? In connection with the Oslo Accord, the only issue that the president of the PA can wield and threaten Israel with is the discontinuation of the Israeli-Palestinian security coordination. Much has been written in Al-Monitor and elsewhere about the effectiveness and importance of Israeli-Palestinian security coordination, and its mutual benefits to both parties.

Criticism of that security coordination is prevalent among all Palestinian factions. Even senior PA officials contend that this issue makes it difficult for them to cope with the Palestinian public, which is very disappointed with the PA’s so-called conciliatory conduct. In October 2014, when the PA sought to be recognized as a state by the UN Security Council, and following Israel’s threats to take sanctions against it, Saeb Erekat, who headed the negotiation team with Israel, submitted a document to the president that proposed to sever security coordination with Israel.

Abbas did not embrace the proposal and even today he is disinclined to stop this cooperation. To him, not only is it sacred but it is also a paramount Palestinian interest. In the setting of this security cooperation, which is primarily intelligence oriented, Israel — which has a vast, state-of-the-art intelligence array — provides the Palestinians with valuable information that helps the latter to foil threats to the president’s regime. Naturally, most of the information remains confidential. However, one such example of cooperation and exchange of information between the two parties was published in the past.

In August 2014, during Operation Protective Edge in Gaza, Shin Bet Director Yoram Cohen arrived at the office of the Palestinian president in Ramallah, putting on his desk a detailed dossier about Hamas activists, operated by Salah al-Arouri, who plotted to stage a coup against the PA. After reviewing the information, Abbas was convinced of its authenticity. He later slapped it on Khaled Meshaal, the head of Hamas’ political bureau, at a meeting in Qatar that was attended by Emir Tamim bin Hamad Al Thani.

This is only one example of the effective cooperation and shared interest that both Israelis and Palestinians would like to continue pursuing. At a time when all the other agreements appear to be irrelevant, this is the last remaining significant remnant of the Oslo Accord.

Abbas, therefore, has no effective tool or weapon up his sleeve to threaten Israel with, barring security coordination, which he has no intention of stopping. So why did he promise to drop a bombshell? How could a seasoned statesman, who has been through a lot in his relationships with Israel and the international community, make a declaration he had no intention of following through? The explanation is fairly simple: All Abbas wanted was to again raise awareness of the Israeli-Palestinian conflict, in which the world has stopped showing interest. Having tried to bridge a compromise between the parties, all the countries — including the United States — have long given up on the possibility of a peace arrangement in the Middle East as long as both incumbent leaderships remain in power.

Those senior PA officials who want to jumpstart a move realize that without bringing the conflict back to the fore, the PA will simply fade away. In other words, given the current state of affairs, when the world is focused on other pressing matters such as Syria, the Islamic State, Iran and Ukraine, there is no chance of applying pressure on Israel. That assessment was remarkably dead on.

Proof of that was the address by US President Barack Obama who at the start of the General Assembly listed all the dangers threatening the free world, but did not devote a single word to the Israelis and Palestinians.

This is why Abbas wanted to draw attention. This is why he promised to drop a bombshell. This is the only way — he and his senior officials had hoped — the world would listen. The “bombshell,” even if only a dud, might reinstate the conflict back on the global agenda, arouse interest and maybe even receive adequate media coverage.

But the mountain turned out to be a molehill. Most of the Palestinians who watched Abbas' address in New York with bated breath felt deceived. Once again, Abbas was perceived as having failed to deliver on his promise.

At the end of his address, a modest yet historically significant ceremony took place at the UN Rose Garden. For the first time, the Palestinian flag was flown at the United Nations building, heralding the induction of the Palestinians into the organization’s institutions, another important step toward statehood. The bombshell that wasn’t dropped spoiled their party.