What 'bombshell' will Abbas drop at upcoming UN speech?

Palestinian President Mahmoud Abbas has promised a dramatic declaration at the coming UN General Assembly that some believe will include an ultimatum to Israel: Freeze settlement building or assume responsibility for security throughout the West Bank. 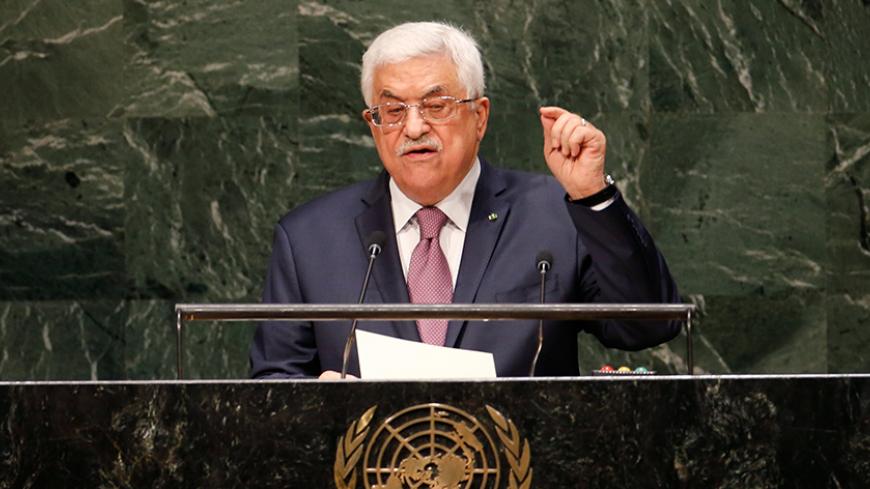 All eyes will be on the podium of the United Nations General Assembly for the Sept. 30 speech by Palestinian President Mahmoud Abbas. In an interview published Sept. 17 by the London-based Al-Quds Al-Arabi, Abbas promised to drop a "bombshell" in his address but did not elaborate. He would only say that it will relate to the diplomatic process and to Israeli violations of the 22-year-old Oslo Accord. On Sept. 22, Haaretz reported that at a Paris meeting with retired Israeli diplomats, the Palestinian president said, “The speech will be severe because the situation is severe.”

Abbas denied rumors that he planned to announce the dismantling of the Palestinian Authority. He also denied reports about his intention to abrogate the Oslo Accord. An Israeli source close to the Palestinian leadership told Al-Monitor on condition of anonymity that Abbas’ associates are vehemently opposed to such moves. The PA, established and operating by virtue of the Oslo Accord, is the mainstay of the economy in the territories. The donor countries (via the European Commission's Ad Hoc Liaison Committee) funnel millions of dollars every month (more than one billion annually) to the PA’s bank account. Dismantling the PA would cut its 160,000 employees from the budgets of the international community.

If not an abrogation of the Oslo Accord, including a dismantling of the PA established by the agreements, what could this “bombshell” be? Two years ago, official Israeli sources announced that the Palestinian UN membership application, following which the PA was recognized as a nonmember observer state at the organization, constitutes a violation of the Oslo agreements.

And what has happened since? Not a thing. In September of 2014, Abbas waxed poetic at the UN General Assembly, saying, “The hour of independence of the state of Palestine has arrived,” and announced that the PA had decided to apply to UN bodies to bring about an end to the occupation and "push forward the efforts to achieve peace.” Although the PA was accepted into several UN organizations over the past year, Palestine’s liberty bell did not ring. In January, the PA submitted an official request to join the International Criminal Court in The Hague. Prosecutor Fatou Bensouda launched a preliminary investigation into suspicions that Israel had committed war crimes in the Palestinian territories. But this move did not bring about the end of the occupation, nor did it hasten the advent of peace.

So what is going to make the UN speech — possibly the last Abbas will deliver to that forum — worthy of the descriptors “severe” or “bombshell”? Why should anyone get excited over this speech? According to a poll published last week by the Palestinian Policy and Research Center headed by Khalil Shikaki, the Palestinian president no longer represents his people. Satisfaction with the president’s performance has plummeted since the previous survey conducted in June to 44%. If presidential elections were held now in the territories, former Hamas Prime Minister Ismail Haniyeh, who objects to the two-state solution, would come out ahead of Abbas by five percentage points (49% to 44% in the territories, and in the West Bank by 49% to 42%).

For the first time, those opposed to the two-state solution outnumbered its supporters (51% compared to 48%). This figure is obviously linked to the finding that two-thirds of those surveyed think the expansion of the settlements has quashed this option. People usually think that absent progress toward a two-state arrangement, most of the Palestinian public would support a one-state solution with equal rights for Jews and Arabs. In response to a question about the next step, with the two-state solution off the table, the survey showed that the one-state solution is not popular (30% support it compared to 69% who are opposed). On the other hand, 57% said that under such circumstances, they would support a renewal of an armed intifada.

Violent opposition to the occupation does not scare Prime Minister Benjamin Netanyahu. It provides him with an excellent opportunity to enlist the word “terror” — the horse on which he rode all the way to the top. From his high perch he buttresses himself behind the walls of the settlements, the Iranian nuclear threat and the diplomatic stalemate. What costs Netanyahu sleep is the possibility that the “bombshell” that Abbas and his advisers are sitting on will rob him of his security-related argument. He would no longer be able to place the responsibility for terror attacks on the Palestinian Authority.

According to information obtained by Al-Monitor, Abbas may give Netanyahu an ultimatum: If Israel does not freeze its settlement building within a set period and recognize the 2002 Arab Initiative and the 1967 borders as a basis for negotiations, the PA will hand back to Israel the responsibility for security in the whole of the West Bank. As it is, Israeli security forces go in and out of West Bank towns whenever they feel like it. The Supreme Court even ruled this month that Israeli authorities are authorized to demolish Palestinian buildings in Area B and apparently also in Area A, where civilian matters are supposed to be under the sole control of the PA. The next step would be to renounce an independent Palestinian state and demand equal rights for all the Palestinians living under Israeli rule. According to data published by the CIA, the number of Jews living between the Mediterranean and the Jordan River is almost equal to the number of Palestinians (some 6.2 million).

Back in August 2008, the president of Al-Quds University, Sari Nusseibeh, told me in an interview for Haaretz that if there was no breakthrough in diplomatic negotiations within a year, “There will be no choice but to demand one state. What we have today is the worst of both worlds.” Seven years of walking in place and even moving backward have gone by. The Palestinian intellectual who tried to advance the two-state solution (without a Palestinian right of return to Israel) together with the former head of the Shin Bet security agency and former Knesset member Ami Ayalon added, “Sooner or later, in another 50, 100 or 200 years, we will live in peace, within the framework of one state, two states, a confederation or some other arrangement."

"The only question,” Nusseibeh said in summary, “is the amount of pain we will inflict on one another until we get there.” This very difficult question with which we have been grappling for decades will continue to resonate even after the “bombshell” is dropped at the UN next week.