Palestinian President Mahmoud Abbas said to Israeli peace activists that he would approve the establishment of a demilitarized Palestinian state, which his close associates saw as a message to Israel that Palestinians want peace. 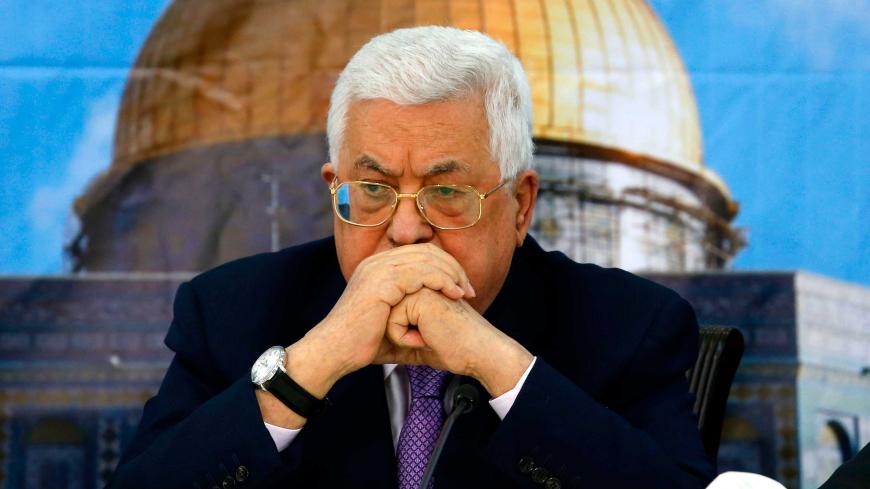 RAMALLAH, West Bank — Palestinian President Mahmoud Abbas met with Israeli academics and intellectuals Aug. 28 at the presidential palace in Ramallah in the West Bank, where he made unfamiliar statements about accepting a demilitarized Palestinian state.

Israeli press cited Israeli figures that attended the meeting, confirming that Abbas said, “I support a state along the 1967 borders, without an army. I want an unarmed police force with batons, not guns.”

According to the Israeli media report, Abbas added, “Instead of military aircraft and tanks, I prefer building hospitals and schools and allocating money and resources to social organizations.”

Abbas reiterated this stance during his meeting with a delegation from the Israeli Peace Now Movement Sept. 2 and declared that he agrees to NATO forces’ presence to control the borders.

Abbas’ declaration is considered an acceptance of one of the main demands that the Israeli government has always called for to ratify a peace agreement with Palestinians.

Abbas’ statements sparked official Israeli reactions. Israeli Knesset member and former head of the Israeli negotiation team Tzipi Livni tweeted Aug. 28, “Abu Mazen has agreed to demilitarizing the Palestinian state in our negotiations with him.” Israeli Minister of Intelligence and Transportation Yisrael Katz described Aug. 28 the statements of the president as “Arabic propaganda for the Hebrew-speaking interlocutors,” meaning that his announcement was addressed to Israelis.

Meanwhile, member of the Executive Committee of the Palestine Liberation Organization (PLO) Ahmad Majdalani, who is close to Abbas, told Al-Monitor, “Agreeing to a demilitarized state is not new. The president’s words aimed at getting the message through to Israeli society to dissipate its fears regarding a Palestinian state. The national and religious right-wing parties in Israel are pitting against Palestinians and the peace process and describing them as a threat to Israel’s security and existence, thus stirring these fears.”

Majdalani said, “There is internal consensus on Abbas’ statements. We are talking about a state abiding by international agreements and treaties. We will not establish a state with military ambitions. We want to ensure the required level of security for citizens and stable relations with our neighbors in the region. A newly formed Palestinian state will allocate its resources to development.”

The Palestinian Authority (PA) established several security bodies armed with light weapons upon its formation as per the 1993 Oslo Accord, and the PA and its security bodies received US and European support. But these bodies collapsed during the second intifada in 2000.

After that, the United States in 2005 started working on rehabilitating and developing the Palestinian security institution in the West Bank and providing it with light arms, training and coordination with the Israeli side. This happened through Gen. Keith Dayton, who is now the director of Marshall Center for Security Studies. He was appointed by the United States as security coordinator between Israel and the PA in Jerusalem and resigned in 2010. However, US support for the Palestinian security service did not stop.

For his part, Fatah leader and head of the political committee of the Palestinian Legislative Council Abdullah Abdullah told Al-Monitor, “Palestinians have long accepted a demilitarized state because, in the presence of peace, there would be no need for war. Police forces are enough to ensure order and protect citizens.”

Abdullah said that the political messages behind Abbas’ statements aim at “pressuring the Israeli government and getting the message through to Israelis that peace is in the interest of both parties, especially since most of the participants in the meeting with Abbas were Israeli peace activists. Abbas also wanted to underline the Palestinian stance that is committed to the peace cause.”

Abdul Majid Sweilem, a political science professor at Al-Quds University in Abu Dis and executive director of the pro-Fatah Awdeh, told Al-Monitor, “Abbas’ statements constitute a message he wanted to get through to Israeli society that we do not want heavy weapons.”

Sweilem added, “The Palestinian stance is clear because Israel would not possibly concede to us holding heavy weapons under any peace agreement. This might seem like a compromise, but in reality, we cannot own these weapons because the possibility of using them is out of the question if we are to have political relations with Israel.”

He said, “Weapons do not seem necessary in the Palestinian situation. These statements are an attempt to convince the Israeli people that, when we have an independent state, we will not have any intentions for military acts against Israel. We want real peace based on justice, and building this state is a natural right for Palestinians. We do not care about arms but are preoccupied instead with peaceful coexistence between Palestinians and Israelis.”

Sweilem noted that the timing of Abbas’ statements was key. He said, “The Israeli right and the US administration are trying to overstep the two-state solution and work against it. For that reason, Abbas is focusing on this solution as the only one that could ensure real security for both Palestinians and Israelis.”

Although the proposition allegedly got unanimous agreement from the Palestinian leadership, it seems only Fatah and some PLO factions approve of it while other major Palestinian factions oppose it. Hamas official spokesman Sami Abu Zuhri tweeted Aug. 29, “Abbas’ statements about his desire to establish a demilitarized Palestinian state are personal and do not reflect the Palestinian people. They reflect the culture of Fatah that is based on coexistence and normalization with Israel.”