Abbas at UN: Palestinian flag outside, warning flag inside

The Palestinian flag has been raised at the United Nations, but the address by Palestinian President Mahmoud Abbas failed to rally concern about the desperate and volatile current situation. 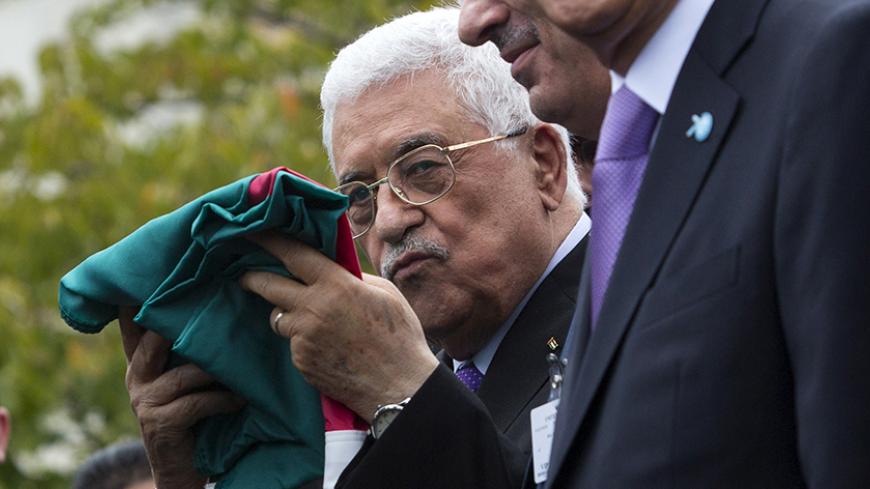 Palestinian President Mahmoud Abbas holds a Palestinian flag before raising it during the UN General Assembly at the United Nations in New York, Sept. 30, 2015. - REUTERS/Andrew Kelly

Israel heaved a collective sigh of relief after listening to the speech delivered by Palestinian President Mahmoud Abbas on Sept. 30 at the UN General Assembly. Almost nothing emerged of the expectations raised in recent months regarding the address, which was anticipated as being constitutive and extremely important. In the end, it was mainly confusing. Abbas did not resign; he did not expressly annul the Oslo Accord; and the bombshell he promised to drop (and did) failed to explode because it was equipped with a time-delay mechanism. The speech that was supposed to be a historic leap turned out to be a baby step. The problem is that it is another baby step toward the abyss. When Israel and the Palestinians fall into the chasm, they will recall the desperate UN General Assembly speech of 2015 and ask, Why didn’t we see the writing on the wall?

Indeed, what Abbas did before the half-empty plenum of the United Nations was to in effect write on the wall in big letters. The problem is that few bothered with the content of his words, and even fewer took it seriously. Ostensibly, Abbas’ declaration that the Palestinians will cease honoring the agreements signed with Israel should have constituted a veritable earthquake. Instead, it was a conditional earthquake: No one knows when it will happen, how it will happen, what exactly will happen or if it will happen at all. One possibility is that the speech will hover above for several days until it dissipates into thin air, like its predecessors. It is also possible, however, that it will provoke changes on the ground.

According to Israeli analysis, the most telling signs that the announcement was an empty one — one that won't lead to action — are that no actual target date or deadline was cited, and no ultimatum was expressly made. When will the Palestinians cease honoring the agreements? Under what conditions? Which of the agreements? Abbas left all these issues ambiguous and undefined.

“So long as he does not declare, for example, that the partitioning of the West Bank into Areas A, B and C [designating Israeli and Palestinian administrative and security responsibilities as per Oslo] is null and void, so long as he does not set a date for the dismantling of the Palestinian Authority, it is impossible to view the threat as something serious.” This was the view expressed to Al-Monitor by an anonymous Israeli source expert in relations between Israel and the Palestinians and implementation of the agreements between them. “Don’t forget that some of the agreements in force today allow the Palestinians to receive the taxes it is entitled to from Israel. We are talking about large sums of money, and I don’t think that the authority will want to forfeit them,” he said.

Another critical question involves security cooperation between the Israel Defense Forces, Shin Bet and the Palestinian security apparatuses. In late September, a highly placed Israeli officer told Al-Monitor on condition of anonymity, “[Security] cooperation continues on the same level as it always has. We don’t see any change in activity on the ground or in the directives dispensed by their diplomatic echelons.” Even the day after Abbas' speech, no changes were evident.

As far as Israel is concerned, the heart of its agreements with the Palestinians is security coordination, which allows Israel to keep terror on a relatively low burner. “The day that security cooperation ends, we’ll know that something has happened,” said a senior Israeli security source who asked that his name be withheld. “We’ll know [then] that we’re advancing in the direction of the breakup of the Palestinian Authority or a third intifada. At the moment, we’re not there yet.”

A Palestinian source closely aligned with the Palestinian leader told Al-Monitor, “President Mahmoud Abbas is frustrated.” Speaking on condition of anonymity shortly after Abbas had concluded his presentation, the source said, “What he did today in his speech was to ratchet up the pressure. The warnings are the same, and the situation is the same, but Abbas’ voice was mightier today, and that constitutes a warning sign. He hopes that the world will understand the severity of the situation.”

The Americans are the ones who extracted the fuse from the bombshell. As previously revealed, Secretary of State John Kerry is the person currently thwarting a meeting between Prime Minister Benjamin Netanyahu and Abbas. The Americans are worried about the potential of an accelerated smashup in relations between the two sides on the heels of such a meeting. In earlier talks between the Americans and the Palestinians, Abbas was persuaded to remove target dates and deadlines from his speech, thus basically defusing most of the threats.

Another factor contributing to the Palestinians' snowballing desperation is represented by President Barack Obama not uttering a word about the Israeli-Palestinian conflict in his UN General Assembly speech. Taking a look around, Abbas sees a wall of indifference everywhere. Everyone is busy with Syria and the signs of a renewed cold war emerging around the collapsing regime of Syrian President Bashar al-Assad. The Palestinians are far less interesting. It doesn’t seem that Abbas’ speech will change any aspect of this reality at this point in time. The world will urgently return to the Palestinian issue if and when the big bang occurs. The despair spreading among the moderate elements of the Palestinian leadership represented by Abbas moves things closer to the big bang.

With his UN speech, Abbas succeeded in creating a rare moment of national political unity in the Israeli camp. Almost all the party heads attacked the speech, strongly condemning what Abbas said. While the response from Netanyahu’s office was predictable, the harsh statements by Zionist Camp leaders Isaac Herzog and Tzipi Livni and Yesh Atid head Yair Lapid served to demonstrate the yawning chasm between Israel and the Palestinians and the differences in the language used by each side to the conflict.

Herzog said that Abbas’ statements accusing Israel of apartheid were twisted and serve only the extremists on both sides. He also said that the Palestinian leader and Netanyahu “are leaders who are afraid of making decisions” and that their paths will lead to more bloodshed and hatred.

Livni, who believes that an agreement can still be reached with the Palestinians in direct, bilateral negotiations, said, “The time has come for the Palestinian leadership to realize that a Palestinian state can only arise through agreements … and not through speeches, accusations and flags.” Ironically, Lapid, who only a few days before had presented a new diplomatic program based on the Arab Peace Initiative, was the bluntest in his criticism of Abbas, asserting, “[Abbas’ address] was not a speech, it was ugly and false mudslinging by a human being who, instead of being a leader, [acted] like the last of the inciters.”

Abbas, like the Americans and Europeans, had hoped that the Israeli center-left parties would join Netanyahu’s government so that negotiations could be resumed. Ironically, Abbas’ speech succeeded in creating Israeli unity (if only for a brief moment), but a unity based on all the wrong reasons — yet another example of the Middle East's many paradoxes.

Given the current state of affairs, the only lasting remain from Abbas’ desperate performance at the UN General Assembly is the occasion of hoisting the Palestinian flag in front of UN headquarters. Inside, the leader of the Palestinians warned of the imminent collapse of the agreements with Israel and declared the Palestinian Authority (PA) a crumbling entity, lacking any authority and likely to implode. Outside, the flag of that same authority was raised, giving it the status of a state, at least ceremoniously. Numerous foreign ministers rubbed elbows to appear in the historic photo of the raising of the Palestinian flag in front of the UN building. Meanwhile, the prospects for a Palestinian state are increasingly receding, and the PA is disintegrating. This is another of those Middle Eastern paradoxes, testifying to the quandary and dead end that the entire process has reached.