What Trump really wants for the Mideast

The unrealistic statements by US envoy Jason Greenblatt about the Palestinian Authority's ruling the Gaza Strip again might indicate that US President Donald Trump does not have a realistic plan for resolving the Israeli-Palestinian conflict. 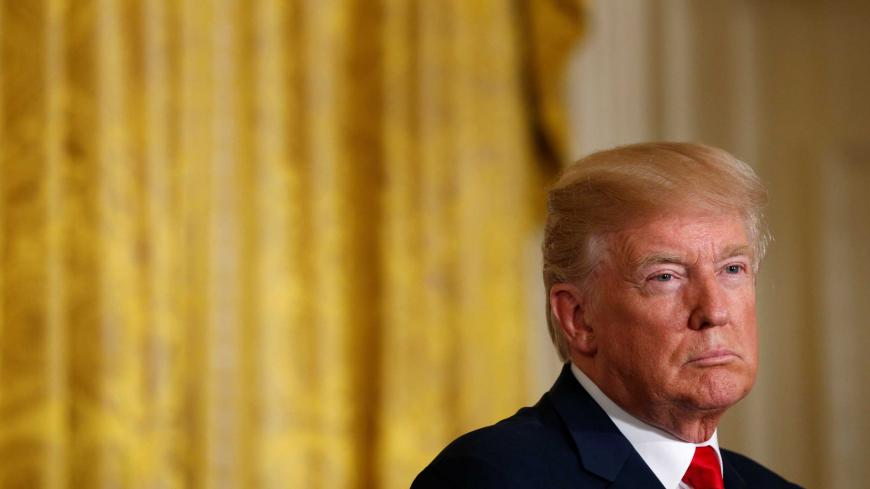 There were quite a number of people in the Israeli peace camp who hoped, even believed, in the statements made by US President Donald Trump regarding his intentions to consolidate a large “package deal” between Israel, the Palestinians and all the Arab states. The rapid pace of presidential envoy Jason Greenblatt’s jet-setting between Jerusalem and Ramallah in the West Bank also strengthened the perception that the current arch-conservative president might succeed where two liberal presidents — Bill Clinton and Barack Obama — failed.

The long hours that Greenblatt spent with top officials of both sides, and his “learning” tours of the territories, served to strengthen a certain amount of optimism. However, one sentence uttered by the envoy — his summary at the end of a tour on Aug. 30 along the length of the Gaza Strip border with Coordinator of Government Activities in the Territories Maj. Gen. Yoav Mordechai — turned this feeling into an illusion, and real hope into “fake hope.” Greenblatt called on the Palestinian Authority (PA) to retake control of Gaza and administer it, because the Hamas regime had failed to provide for the needs of the population. This demand is as realistic as calling on South Korea to take control of North Korea’s nuclear facilities, because the Pyongyang government does not allow its citizens freedom of expression.

If we assume that Greenblatt expresses his master’s voice, then such a statement testifies to a basic lack of understanding by the administration of the conflict and the ways to resolve it. How, exactly, does the Trump administration expect the PA to reassume governance over the Gaza Strip? It is hard to believe that Washington wants to open up a new military front in the Middle East, and that Ramallah’s security apparatuses would blow up Hamas’ power centers in Gaza under the cover of Israeli air force planes and cannons on Israeli navy ships. Or did Greenblatt mean the democratic option; in other words, to hold elections for president and a legislative council? Such a step would be a replication of the fatal mistake made by President George W. Bush, who forced the PA to hold general elections 11 years ago. David Welch, the assistant secretary of state for Near Eastern affairs under Secretary of State Condoleezza Rice, called Palestinian President Mahmoud Abbas at the time and told him bluntly, “If you cancel the elections, you can forget our phone numbers.”

If Greenblatt would have asked Abbas his opinion regarding putting himself to the test of public opinion again, he would have received the same answer that Bush received in 2006. At the time, Abbas warned the Americans that one-sided Gaza disengagement, on the backdrop of a diplomatic stalemate and continuous settlement construction in the West Bank, is perceived by the Palestinian public as an achievement of the Hamas anti-Abbas camp.

Israeli intelligence, which begged the US administration at the time to get off its elections-in-the-territories horse, would also repeat the same recommendation today. If Greenblatt had asked Mordechai to assess the chances of Fatah's winning over Hamas in the voting booth, it is likely that the envoy would have skipped his implied rebuke of the PA for not assuming control of the Gaza Strip.

The problem is not only what the American envoy said, but the fundamental things that he avoided saying. The problem is even more salient on the background of the principles presented by UN Secretary-General Antonio Guterres, who also visited the Gaza Strip that same week. Guterres expressed support of Abbas’ efforts to create the conditions for a united leadership in the West Bank and Gaza, but in the same breath expressed concern over the terrible humanitarian situation he saw before his own eyes in the Gaza Strip. The conditions referred to by the secretary-general were in fact the continuation of collective punishment of Gaza residents.

“I am deeply moved to be in Gaza today, unfortunately, to witness one of the most dramatic humanitarian crises that I have seen in many years working as a humanitarian in the United Nations,” said Guterres during his Gaza tour. He expressly called on Israel and Egypt to remove the blockade. Did anyone hear Greenblatt express criticism of the joint pressures inflicted by Israel and the PA on Gaza residents, via limiting their electricity supply? Did anyone hear Washington firmly request that Jerusalem lift its closures on the Gaza Strip?

The "conditions" that Guterres referred to are jump-starting genuine negotiations on advancing the two-state solution, while simultaneously battling violence, and halting construction in the settlements. “You have created, for the first time in 2,000 years, a home for your people,” Guterres said during his Tel Aviv Museum of the Jewish People speech, and immediately added, “It is now overdue that the Palestinians also fulfill their legitimate rights and national aspirations.”

By contrast, Trump clung to his policy — or to be more exact his lack of policy — that he presented in February at a joint press conference with Prime Minister Benjamin Netanyahu: “I’m looking at two-state and one-state and I like the one that both parties like. I’m very happy with the one that both parties like.” One side, the occupied Palestinian side, repeats that it sticks to its desire for a two-state solution. The other side, the occupying Israeli side, declares that it does not want two states and creates facts on the ground (settlements) that sabotage this solution, while simultaneously showing no signs of wanting a binational state.

It seems that Trump does not know what he wants. Virginia Rep. Gerry Connolly, a Democratic member of the US House of Representatives who serves on the House Committee on Foreign Affairs, spoke with the Haaretz correspondent in Washington, Amir Tibon. Connolly said many Republicans support the two-state solution but do not want to proclaim this openly before the Trump administration expresses this position first.

Trump will finally have the opportunity to say what he wants, or does not want, in his Sept. 19 speech to the United Nations General Assembly. We can only hope that he will not send any more envoys here who will give both sides unrealistic and damaging advice.