Palestinians: Trump's plan, not Greenblatt, is the problem

Palestinians do not think the resignation of US Middle East envoy Jason Greenblatt will make a difference to the fate of the so-called deal of the century. 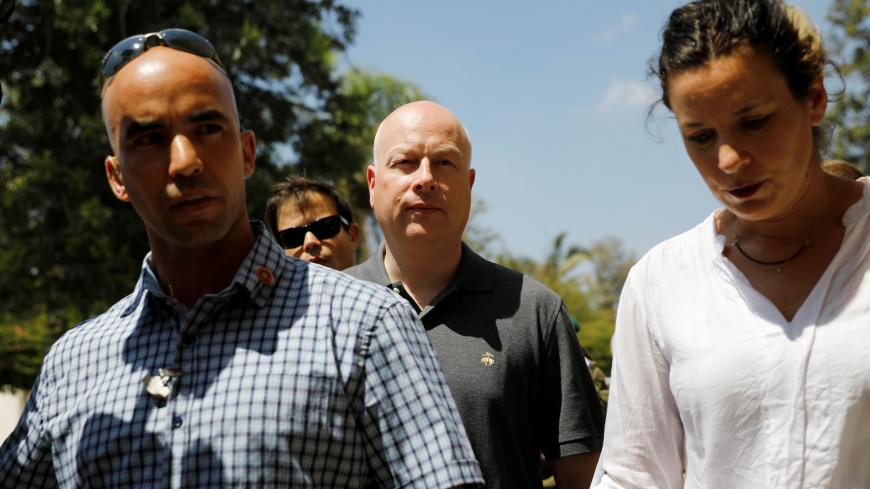 GAZA CITY, Gaza Strip — Although Palestinians have generally welcomed the resignation of Jason Greenblatt, the Donald Trump administration's special envoy for Middle East peace, they do not believe his departure will effect much change. To many, it is one more nail in the coffin of the US peace plan, which they already consider dead on arrival. Greenblatt was one of the architects of the plan, the so-called deal of the century.

Trump tweeted Sept. 5 that Greenblatt will be leaving his post to work in the private sector. Greenblatt plans to depart after the long-delayed peace plan is fully unveiled, which was expected to be sometime after the Sept. 17 Knesset elections in Israel. He will be replaced by Avi Berkowitz, currently a deputy to White House senior adviser Jared Kushner, and Brian Hook, US special representative for Iran.

The Palestine Liberation Organization (PLO) has not released an official statement, but Omar Awad Allah, the Palestinian Authority's deputy assistant secretary of state for multilateral relations, told Al-Monitor that Greenblatt’s resignation indicates the US plan will not succeed. He noted that in the eyes of Palestinians, the plan represents an attempt to undermine their cause and to prevent them from establishing their own state.

Awad Allah also expressed the Palestinians' dissatisfaction with the United States under the current administration acting as sole mediator in the Middle East peace process, especially regarding the Palestinians. “We have severed political relations with Washington, and nothing binds us to them,” he said.

Fatah Central Committee member Dalal Salama told Al-Monitor that Greenblatt was biased toward Israel. “Such a thing is absolutely unacceptable for us, particularly since he served as a peace envoy for the Middle East,” she said. Salama also asserted that US positions in general have largely undermined the Palestinians' legitimate rights.

Commenting on the Greenblatt resignation’s impact on the peace process, Salama said she doesn't expect a “radical change.” “The Palestinian position has been crystal clear from the beginning: The US administration’s president and envoys are disqualified from any political process relating to us,” she remarked.

In December, the Palestinian Ministry of Foreign Affairs accused Greenblatt of seeking to present Israeli Prime Minister Benjamin Netanyahu’s ideas and vision as the way to resolve the conflict. Three months ago, Greenblatt accused Fatah, which Abbas heads, of standing in the way of the chance for coexistence with Israel by continuing to voice rejection of the peace plan.

Awad Allah told Al-Monitor, “We won't be dealing with the new envoy, as we didn't deal with Greenblatt.” He added, “The situation could change, however, provided the US backs down on the decision to move its embassy to Jerusalem and recognizes the two-state solution [according to] the 1967 borders and Palestinian refugees’ rights.”

In the same vein, Nahed Zaqout, director of the PLO's Abdullah al-Hourani Center for Studies and Documentation, said the Palestinian leadership is not concerned about Greenblatt’s successor.

“The official Palestinian position toward the US peace plan is that it is considered as a whole, [and] based on that, the [PLO] rejects the deal of the century [entirely],” Zaqout told Al-Monitor. In short, given the PLO's focus on the big picture, it makes no difference whether Greenblatt stays or goes.

Zaqout reiterated, “I don't think the resignation of an employee at the US administration would have a major impact on peace. US policy is run by institutions, not individuals.”

Nevertheless, Zagout expects that pressure on the Palestinian leadership will lead to political instability after the Israeli elections. Some Israeli candidates had turned up the volume of their tough talk, including intentions to annex West Bank territory in the competition for right-wing votes.

Meanwhile, one Hamas leader, Wasfi Qabha, called Greenblatt’s resignation “new evidence indicating the failure of the deal of the century.” Speaking to Al-Monitor, Bassem Naim, a member of Hamas' international relations bureau and head of the Gaza-based Council on International Relations — Palestine, considers the resignation good news and asserted that the Palestinians can counter any peace project that poses a threat to their legitimate rights.

Talal Awkal, an author and political analyst for the Ramallah-based newspaper al-Ayyam believes Greenblatt’s resignation will make no difference, because the US plan goes too far in supporting and adopting Israeli policy toward the Palestinian territories and peace process, and those behind it are still involved.

“The skeleton crew for the peace plan is still there, and therefore US policy itself remains the same,” he told Al-Monitor, referring to Trump and his team. Awkal asserted that the Palestinian leadership's position on the resignation is that it's “important and good” and lays the foundation for the forthcoming phase of the confrontation the United States and Israel are planning.