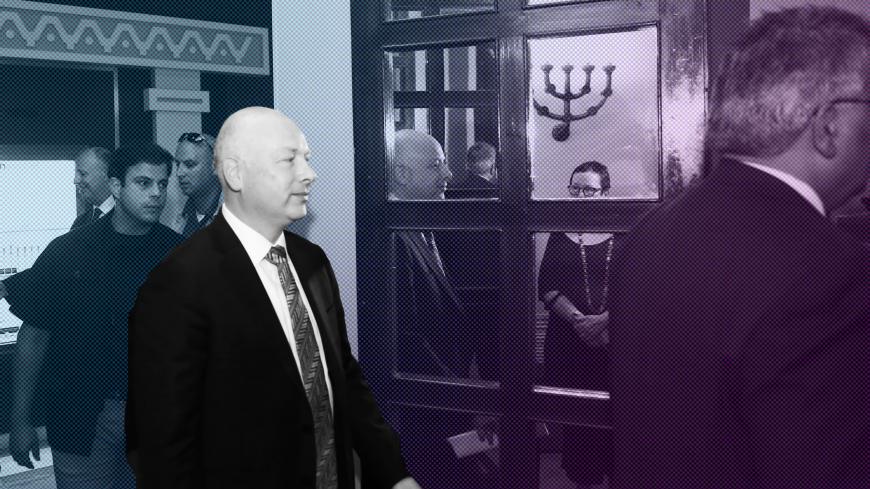 Jason Greenblatt (C), US President Donald Trump's Middle East envoy, is reflected in a mirror as he enters a room to hold a news conference with Israeli Minister of Regional Cooperation and the head of the Palestinian Water Authority, Jerusalem, July 13, 2017. - RONEN ZVULUN/AFP/Getty Images

In an opinion piece published April 22 in the New York Times, US special representative for international negotiations Jason Greenblatt wrote about human suffering in the Gaza Strip. The enclave endures long power cuts, shortages of medicine and food, high unemployment and a polluted shoreline.

After Greenblatt blamed Hamas for causing this suffering by being hostile to Israel, he concluded his piece by suggesting two scenarios to help Gaza: Isolate Hamas, or for Hamas to restore peace and stability by halting the violence and recognizing Israel. “Imagine if Hamas chose peace,” he wondered.

Greenblatt’s piece mostly reiterates the anti-Hamas US discourse and adopts the Israeli position. Yet, the conclusion of his article is unique in suggesting a new option for Hamas — choosing peace and rejecting violence. Such an option gives rise to many good questions, as it suggests that the United States plans to keep Hamas out of its so-called "deal of the century" peace plan, thus attenuating the movement’s possible opposition to it.

On April 23, Husam Badran, a member of Hamas’ political bureau in charge of international relations, tweeted, “Greenblatt is biased and blindly supports Israel. He is one of the causes of the problem and of the suffering of Palestinians in Gaza and the rest of Palestine.”

Badran told Al-Monitor from his residence in Doha, Qatar, “Hamas does not take Greenblatt’s discourse seriously, and the bet he is making is a losing one. His words will not stop us from resisting the deal of the century. Hamas will not sit aside while the US tries to end the Palestinian cause.”

Major Palestinian and Israeli newspapers translated the piece, as it reflects the direction of US policy.

During the Time 100 Summit held April 24 in New York, senior adviser to President Donald Trump Jared Kushner announced he will reveal the deal in June.

On April 24, Hamas spokesman Abdulatif al-Qanoo replied to Kushner by confirming Hamas' intention to fight the US peace plan. Salah al-Bardawil, a member of Hamas’ political bureau, revealed the establishment of a committee to resist the plan. He said the group is made up of Palestinians residing locally and abroad and of Arab powers, but he included no more details.

Basem Naim, head of the Council on International Relations in Gaza, told Al-Monitor, “Greenblatt’s article aims to push forward the deal of the century and to greatly pressure Hamas into either ignoring the deal or accepting it. It also shows that Hamas is [on] the political radar of US policy. A rapprochement between Hamas and Washington is impossible, as their views on how to stabilize the region are conflicting. Greenblatt accused Hamas of sabotaging the efforts of [Trump's] administration, when there is also American and European opposition to the deal.”

The last few weeks have witnessed several verbal exchanges between Hamas and Greenblatt. The latest was on April 24, when Hamas spokesperson Hazem Qassem said Greenblatt continues to accept the Israeli side of the story against Palestinians. Meanwhile, Hassan Asfour, a former Palestinian minister of civil society organizations in Ramallah, described Greenblatt’s article as the United States addressing Hamas for the first time.

In a March 1 tweet, Greenblatt accused Hamas of recklessness. Hamas spokesperson Sami Abu Zahri responded that the United States is led by “a gang devoid of any human values.”

Abdullah Abdullah, a member of Fatah's Revolutionary Council and chairman of the Palestinian Legislative Council's Political Affairs Committee, told Al-Monitor, “Greenblatt’s address to Hamas is the biggest proof that Washington is trying to exploit the Palestinian division and look for new leadership to replace President Mahmoud Abbas. The humanitarian understandings reached between Hamas and Israel in March encouraged Greenblatt to focus in his article on the humanitarian aspects of the Palestinian cause. This was a mistake Hamas made because it wanted to stay in power at all cost.”

Greenblatt’s address to Hamas comes three weeks after Hamas leader Ghazi Hamad stated that Hamas is not opposed to talks with the Europeans and Americans, even though Greenblatt himself recently reiterated that Hamas' deputy leader Saleh al-Arouri is wanted for abhorrent crimes and Washington backed a proposed UN resolution condemning Hamas for firing rockets on Israel. The resolution did not pass.

Ahmed Yousef, who was a senior adviser to top Hamas official Ismail Haniyeh, told Al-Monitor, “Although Greenblatt’s article does not officially suggest a dialogue with Hamas, the movement is ready to start a dialogue with the US on condition of transparency and credibility through an Egyptian, Arab or European mediator. Hamas does not reject talks with anyone who could help its cause. Yet, we feel that Trump's administration is more biased toward Israel than any former US administration.”

Bilal Shobaki, a political science professor at Hebron University, told Al-Monitor, “Greenblatt’s article aligns with the US policy toward Hamas since Hamas was besieged after winning elections in Gaza in 2006. It is as if he is saying that the siege managed to force Hamas to improve the humanitarian conditions in Gaza, provide education instead of bombs, give up on war against Israel and content itself with storing its weapons. Greenblatt knows that Hamas is the biggest party to oppose the deal of the century. But Hamas will condemn itself to disappearing if it adopts a neutral position on the deal.”

Greenblatt’s opinion piece may not do much to break down the wall between the United States and Hamas. It doesn't mean Washington will stop calling Hamas a terrorist group. Yet Hamas understands the significance of a senior representative of one of the world’s biggest nations writing an article addressed to the group and published in one of the most prominent global newspapers. It means, at least, that Hamas is still a key issue to the United States.