While most Palestinians believe the resignation of Jason Greenblatt is a sign of failure, some argue the Trump policy will not change. 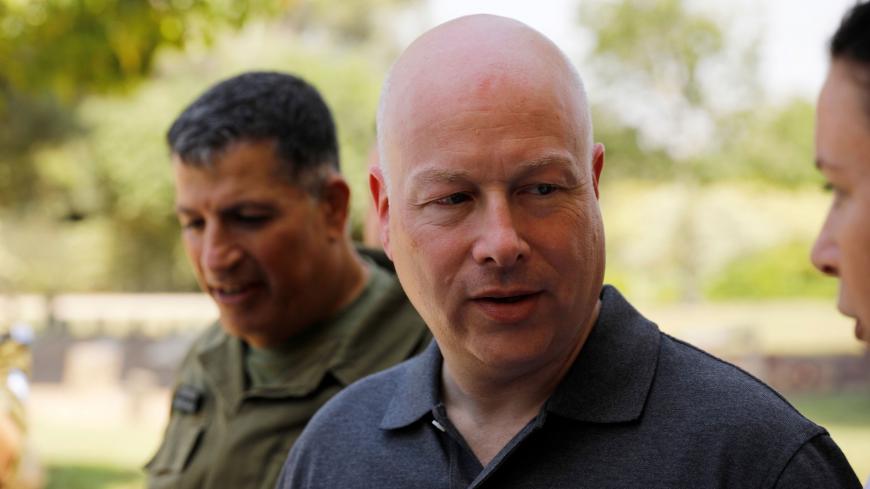 As pundits try to mull over the meaning of the upcoming resignation of US President Donald Trump's special envoy to Middle East peace, Jason Greenblatt, most Palestinians are celebrating his exit, calling it proof of the failure of Trump's policy. Others argue the US plans will not be deterred by the resignation.

PLO Executive Committee member Hanan Ashrawi told Al-Monitor Greenblatt was a “failure, ill-equipped for the post, showed blind support for Israel, indulged in bashing Palestinians and lacked understanding of the realities of the region.” Ashrawi said Greenblatt simply “had no chance to succeed.”

Trump tweeted Sept. 5, “After almost 3 years in my Administration, Jason Greenblatt will be leaving to pursue work in the private sector. Jason has been a loyal and great friend and fantastic lawyer. His dedication to Israel and to seeking peace between Israel and the Palestinians won’t be forgotten. He will be missed.” That was followed four minutes later by a confirmation from Greenblatt himself, thanking the president for “the honor of a lifetime.”

Israeli media later reported that Greenblatt will stay in office a couple of weeks after the unveiling of the US plan scheduled for the day after the Israeli elections on Sept. 17. The Jerusalem Post reported Sept. 5 that Greenblatt’s current deputy, Avi Berkowitz, and Brian Hook, the administration’s special representative for Iran, “will take an increased role on the team after Greenblatt’s departure.”

James Zogby, president of the Arab American Institute, echoed Ashrawi by noting the lack of empathy and knowledge of Greenblatt. “Jason Greenblatt was unique among US Middle East peace negotiators. He was an outspoken and unabashed apologist for Israel who often picked gratuitous public fights with Palestinians and their supporters. He came into the job knowing very little about the conflict and the region and not caring about how Arab public opinion viewed his ‘plans.’ He leaves still knowing very little and still not caring,” Zogby told Al-Monitor.

Zaha Hassan, a former legal adviser to the Palestinian negotiating team and now a visiting fellow at the Carnegie Endowment for International Peace, also believes Greenblatt’s departure signals that the US peace plan will not be released. “It is a recognition that the peace plan will not be released anytime soon — if ever — and it is a sign of his lack of confidence in [Benjamin] Netanyahu’s continuing as prime minister,” Hassan told Al-Monitor.

But while most Palestinian analysts celebrated the departure of Greenblatt as a sign of the failure of what is often referred to as the “deal of the century,” some argued the Trump policy will not change. Two independent sources have told Al-Monitor they were aware, months earlier, of the fact Greenblatt might leave.

Political affairs adviser of the Palestinian Foreign Ministry Ahmad Deek told Al-Monitor that, in his position, he has known Greenblatt will be leaving. “But his leave doesn’t mean the failure or the end of the deal of the century,” he added.

Ashrawi also agrees the departure of one official doesn’t mean the end of Washington’s efforts: “No matter how destructive it is, American policy will not change. The policy guided by [Sheldon] Adelson, Zionist evangelicals and neocons reflects a mindset to the region. We are saying good riddance to him, but the problem is still there because there is an extreme dedication to ignorance.” Ashrawi was referring to some of Trump’s own pro-Netanyahu financial supporters, ideologues and supporters in the United States.

One of the more radical explanations for the departure of Greenblatt is connected to relations with the Israeli prime minister. Khalil Jahshan, executive director of the Arab Center Washington DC, suggested to Al-Monitor some in the Trump administration might have been asking for payback from the Israeli prime minister and Greenblatt might have been opposed to this. “Trump might be saying, ‘I have delivered my part [concerning] Jerusalem, Golan, defunding UNRWA, no longer mentioning occupation and the two-state [solution], and what are you going to give me back.’” If this discussion occurred, it might be that Greenblatt objected and bolted out in protest, suggests Jahshan.

Whatever the reason for the departure of the special envoy, it is unlikely his successors will have the same digital passion that he had. Greenblatt didn’t miss a single opportunity to bash Palestinians — whether it be Hamas officials or the Palestinian president and his team — while never making a single critical statement about his beloved Israeli partners.

Although much of what Israel will do to Palestinians will depend on the results of the upcoming elections and the US 2020 poll, Palestinians are not going anywhere and understand that their strongest asset is their steadfastness and unity. While they have shown courageous steadfastness, the unity quest is still unfulfilled, and this is where they need to put their energy in the coming period.