The approaching end of Mahmoud Abbas’ presidency has prompted him to push harder for Palestinian independence, hoping it will be his parting legacy. 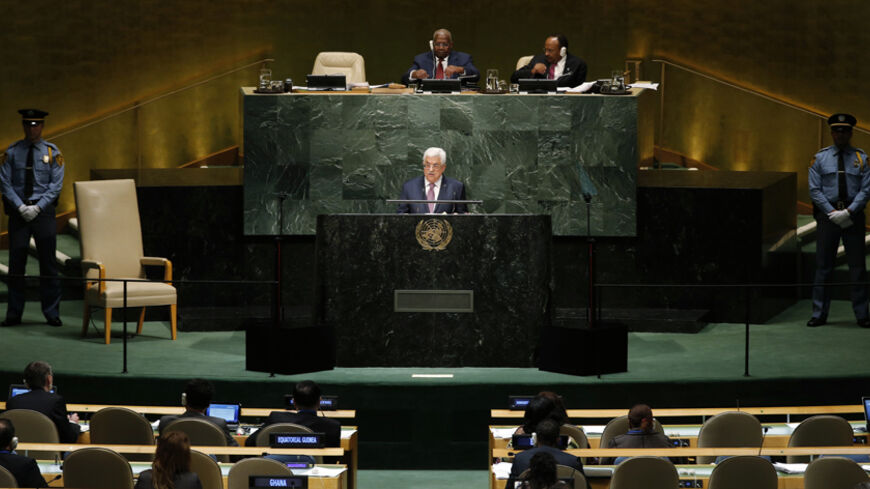 Palestinian President Mahmoud Abbas is possibly making his last effort to try to bring about an independent state. The odds are against him, but he has a plan and he appears to be set to giving it his last best shot.

Abbas’ speech at the UN General Assembly attempted to lay down the basics. No more time-wasting negotiations with the Israelis; borders for the state of Palestine need to be drawn based on the 1967 lines and a reasonable time needs to be allotted to work out how the Israelis will end their 47-year occupation.

The political road map has also been publicly telegraphed. The Arab delegations to the UN are set to work with the Palestinians to draw up a resolution that will reflect most of the publicly declared positions of the international community, especially the United States.

Palestinians feel confident that at least nine members of the UN Security Council, including France, will likely vote "yes," leaving Washington with the unenviable position of having to consider a veto at the very time they are executing a coalition with moderate Arab countries against Islamic extremists in the Middle East.

Palestinian sources in Ramallah told Al-Monitor that US diplomats had privately counseled chief Palestinian negotiator Saeb Erekat and intelligence chief Majid Faraj against the Abbas plan, at least until after the US midterm elections in November.

Washington, busy with executing the war on the Islamic State, wasted little time in responding to the Abbas plan. The US State Department shot back quickly at Abbas’ speech, calling it “provocative” and “counterproductive.”

Israel reacted angrily to the content of the speech and its tone. While the Israeli delegation at the UN missed the speech due to the Jewish holidays, Israeli officials and pundits were upset with the words that the Palestinian leader chose to use. In his speech, Abbas used the word "nakba" — Arabic for catastrophe — which refers to the Palestinian loss of land in 1948, and warned five times that it could happen again. Talking about the Gaza Strip, Abbas twice called Israeli actions “genocide,” a term that has war crime implications. Abbas also mentioned “war crimes,” possibly setting the stage for Palestine to take Israel to the International Criminal Court in The Hague.

Ironically, Abbas did not refer once to the settlements, as the Palestinian strategy seems to have shifted from trying to stop settlement activities to delineating the borders.

Although Abbas said in his speech that he plans to set “firm dates” for the next steps, he did not specify any details. It is expected that after a veto, the same resolution will be put to a vote in the UN General Assembly. Simultaneously, the plan is that this would be followed by the state of Palestine joining tens of international organizations which signed the Rome Statute establishing the International Criminal Court. And if that does not work, Abbas is said to be open to suspending security cooperation with Israel. Palestinian officials refer to this ultimately last position as “throwing back the keys,” or handing the Palestinian areas back to the Israeli occupiers.

While all these consequential steps are well known, they were not mentioned explicitly in Abbas’ speech, leaving many detractors to claim that Abbas was making empty threats. Until the voting position of the United States is known, Abbas appears to have delayed making any firm positions two weeks before the holding of the Gaza reconstruction conference in Cairo.

Norway and Egypt will sponsor a Gaza reconstruction fundraising conference on Oct. 12, but the international community is unlikely to pitch in if the Palestinian Authority is no longer in place or has suspended security cooperation with Israel.

Before his UN speech, Abbas gave a one-hour talk at Cooper Union College in New York. In that speech, Abbas called on Americans to “rethink Palestine.” He ended the speech somewhat pessimistically, but signaled that he would soon pass the torch to a younger generation. “In closing again, at 79, I do not know for certain if I will ever hold in my hand and taste the sweet fruit of peace.” Pointing to the young people interested in peace, Abbas concluded, “But I do know this for certain, I have held in my hand and seen with my own eyes the seeds of peace. The seeds of peace are the young Palestinians, Israelis and Americans and others from around the world.”

Abbas is certainly getting old and has no problem in letting people know his age, and that he does not plan to run for office again. In such a situation, leaders are immune to external pressure and think instead about their legacy.

The overriding takeaway of Abbas’ UN speech was that of a leader who appears to have stopped trying to please everyone but his own people. While he seemed physically tired and often choked on his words, there is no doubt that he was delivering his last hurrah. The partially filled UN General Assembly hall did not give Abbas a standing ovation as in 2012, when the state of Palestine was recognized, but the applause that went on and on testify to the enthusiasm the world has for the cause of Palestine, regardless of who will be speaking for it at the UN in the future.